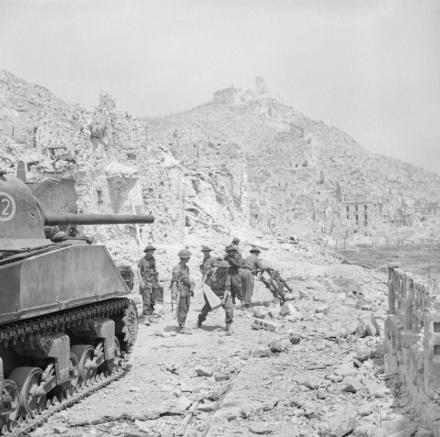 South Africans are seen in this historic image taking part in one of the most bitter battles of World War 2 – Monte Cassino.  Overlooked by the ruins of the historic hill-top monastery, South African engineers of 11th Field Company, South African Engineer Corps, clear rubble from ‘Route 6’, the main road through Cassino. The final German resistance had ceased only hours before.

The Battle of Monte Cassino (also known as the Battle for Rome and the Battle for Cassino) was fierce – it was a costly series of four assaults by the American, Polish, Free French, British and Commonwealth Allies against the Winter Line in Italy held by Nazi German and other Axis forces during the Italian Campaign of World War II. The intention was a breakthrough to Rome. 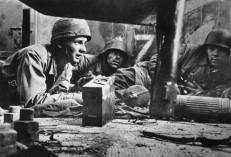 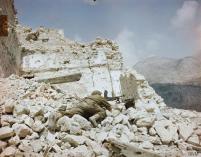 The above images show German soldiers holding their positions in Cassino and a British soldier with a Bren gun assaulting an Axis position amongst the shattered rubble of the  Monastery.

Between 17 January and 18 May 1944 the Monte Cassino and the Gustav defences were assaulted by Allied troops, the last Allied assault involving twenty divisions attacking along a twenty-mile front. The German defenders (including crack German airborne troops) were finally driven from their positions, but at a high cost. The capture of Monte Cassino tolled some 55,000 Allied casualties, with German losses being far fewer, estimated at around 20,000 killed and wounded.

Polish troops entered the shattered hill-top monastery, a symbol of German resistance at Cassino, the morning of the 18th May 1944. 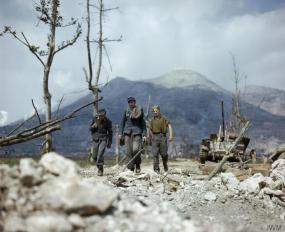 The images show the British and Polish flags on top of the Monastery at Cassino on the final day of the assault and surrendering German soldiers.

This is the monastery before and after it was destroyed. Repeated pinpoint artillery attacks on Allied assault troops caused Allied leaders to conclude the monastery at Cassino, which had existed as a benedictine monastery  from 529 AD was being used by the Germans as an observation post.

Fears escalated along with casualties, and in spite of a lack of clear evidence, the monastery was marked for destruction. On 15 February American bombers dropped 1,400 tons of high explosives, creating widespread damage. The raid failed to achieve its objective, as German paratroopers occupied the rubble and established excellent defensive positions amid the ruins.

The monetary has since been rebuilt and is a national heritage site.