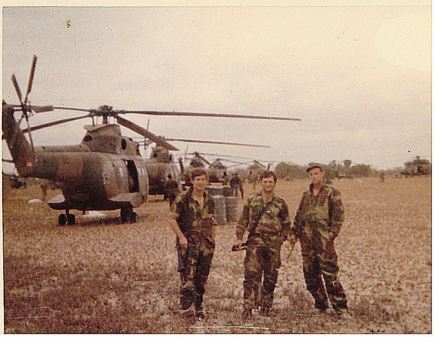 It’s not widely known now, but In the late 1970’s the South African Defence Force (SADF) provided covert assistance to the Rhodesian Security Forces for raids conducted against ZANLA and ZANU bases in Angola and Mozambique (Operation Uric and Operation Vanity).

This is the story of the loss of a South African Air Force Puma – 164 during Operation Uric.

Operation Uric (or Operation Bootlace for the South Africans) was a cross-border raid carried out in Mozambique by operatives of the Rhodesian Security Forces during the Rhodesian Bush War, with combat assistance from the South African Air Force. During the operation, which took place from 1 to 7 September 1979, up to 400 Rhodesian military personnel and a small number of South African military personnel (flying Pumas, Canberras, Dakotas and Super Frelons) attacked bridges and a major staging point for Zimbabwe African National Liberation Army (ZANLA) insurgents in Gaza Province. The battle eventually drew in elements of the Mozambican army (FRELIMO) and police, who sustained heavy casualties. Along with Operation Miracle, this was one of the largest Rhodesian external operations of the Rhodesian Bush war.

SAAF Pumas taking off during Ops Uric, Rhodesian troops and vehicles seen in the foreground

During the operation, on the 6th September 1979 one South African Air Force Puma helicopter – Puma 164 was hit by an RPG-7 rocket which entered through the open rear sliding door and exploded between the Pilot and Co-Pilot killing all 14 Rhodesian servicemen and the 3 South African Air Force personnel on board. The was the highest loss of life for the Rhodesian Security Forces in a single incident during the Rhodesian War. As the involvement of South Africans in this conflict was quite secretive and could politically backfire on South Africa, the crash site was later heavily bombed in an attempt to cover the South African markings on the Puma helicopter.

The battle resulted in over 300 dead ZANLA and FRELIMO soldiers and a number of damaged bridges, buildings and infrastructure. Politically the operation led to Samora Machel, the President of Mozambique at the time, putting pressure on Robert Mugabe to take part in the Lancaster House peace talks. He wanted to prevent Mozambique from being dragged further into the war with Rhodesia, which had already seriously damaged its economy.

The bodies from Puma 164 could not be recovered during the battle and were never repatriated. Their collective graves have been recently located in Mozambique and appropriate memorial stones have now been placed on all these graves.

Five men from the Rhodesian Corps of Engineers:

Photo courtesy of Frans Botha who is seen here with colleagues from the Rhodesian Security Forces during the Operation, the SAAF Pumas are clearly seen in the background.

My Tweets
Join 3,456 other followers