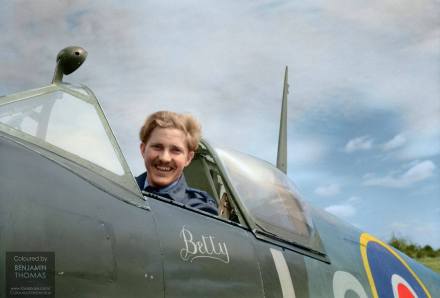 Le Roux, a South African, joined No. 73 Squadron RAF in France in 1940. He was shot down twelve times, but enjoyed better luck with No. 91 Squadron in 1941 and 1942, shooting down eight enemy aircraft before joining No. 111 Squadron RAF in North Africa. He ended his second tour in command of the Squadron. Following a rest from operations he was given command of No. 602 Squadron in July 1944. Le Roux is generally credited as the pilot who attacked and badly wounded Generalfeldmarschall Erwin Rommel in his staff car on the road between Livarot and Vimoutiers on 17 July 1944, the day on which he also destroyed two Messerschmitt Bf 109s and damaged two more to bring his victory score to 23.5.

He won the Distinguished Flying Cross (DFC) not once, but three times, here are the citations:

“This officer has carried out over 200 operational sorties which have included shipping reconnaissances, during which much valuable information has been obtained, and numerous attacks on shipping and enemy aerodromes in the face of heavy enemy fire. Flight Lieutenant Le Roux has destroyed 3 hostile aircraft in combat and at least 1 on the ground.”

“Since being awarded the Distinguished Flying Cross this officer has destroyed a further five enemy aircraft. In addition to his air victories he has attacked shipping and targets on the ground with considerable success. At all times Flight Lieu- tenant Le Roux has displayed a fine fighting spirit”

“Sqn. Ldr. Le Roux’s magnificent leadership has played a large part in the many successes attained by his squadron. He has personally destroyed 14 enemy aircraft and damaged many others, and has also inflicted much damage on enemy shipping.”

Ultimately, however, like several other truly great fighter pilots, he was not destroyed by enemy gunfire, but by the unfortunate circumstances surrounding a fateful cross-channel flight on 29 August 1944. It seems that he had taken off from France and was attempting to make his way through appalling weather taking alcohol back to his squadron at Tangmere. He never reached the coast and crashed into the Channel. According to Paddy Barthropp, ‘Chris’ Le Roux was without a dinghy and was sitting on numerous bottles of champagne, which, as Barthropp points out, do not float. It was indeed a tragic end to one of South Africa’s most popular and gallant fighter pilots.

His cheerful personality and good looks had made him one of South Africa’s most popular fighter pilots, and he was mourned by all who had known him. The No.111 Squadron Operations Record Book contains a magnificent “line” which remains as a fitting memory of one as young, as gallant and as gay (happy) as Chris le Roux. It quotes him as relating the story of his having made a good landing in very dirty weather and the mud described earlier, and finishes up: “I didn’t realise I was down until I heard the ground crew clapping!” He was a very worthy member of “the gayest (happiest) company who ever fired their guns in anger.”

Le Roux was to leave behind an English wife and two children, the family resident at the time in Shropshire.