This is the story of Lt. Samuel Schneider, a South African SAAF hero who evaded captivity in Italy only to join the Italian Resistance as a Partisan and fight the war on the ground.  He is honoured every year in Italy as a national hero where a red rose is regularly laid at his headstone by a grateful nation.  Whereas in South Africa, his homeland, there is now scarce recognition of him.

Lieutenant Samuel Schneider, was born in Springs in South Africa, he was a 1 Squadron South African Air Force pilot of Jewish heritage, and is buried at Faenza’s Allied War Cemetery. On his headstone it reads “He lived and died nobly” on the base, under a Star of David on the top, and his is a very interesting story.

His story is intertwined in Bologna where he fought and died in a famous battle between rebel Italian Partisans and Nazi-fascist forces on November 7, 1944 – called the Battle of Porta Lame.  However because he used a pseudonym name to fight with the Partisans ‘ John Klemlen’ and kept his identity secret – so some confusion on his identity and burial-place arose.

An anniversary is annually dedicated to the fallen of the Battle of Porta Lame and for the Italians commemorating it the true identity of their hero Partisan ‘John Klemlen’ and his burial-place became quite important.  They approached the Commonwealth War Graves Commission (CWGC) to find him.  The CWGC and the South African military archive where able to trace John Klemlen to Lt. Samuel Schneider and how his joining of the Partisans came about.

During the afternoon of August 22, 1944,  Lt. Schneider was part of a patrol of four SAAF 1 Squadron Mk IX Spitfires.  Their mission was to search out enemy communication structures and destroy them. Flying north of Bologna, and flying very low looking for targets, Lt. Schneider’s Spitfire was struck by anti-aircraft fire which damaged the cooling system and he had to abandon his aircraft.

In enemy territory and thanks to some local farmers in the area he received civilian clothes to disguise himself to get back to his squadron, he was saved by the local Partisan Resistance who had managed to hide him, staying with farm families in the Calderara area. To avoid detection and keep those helping him safe he used the false identity of John Klemlen.

The Partisans, known as Gruppi d’azione (abbreviated to GAP) or “Patriotic Action Group” in English,  were small teams of resistance fighters trained in the use of revolvers and explosives. They approached enemy forces with a quick strike and moved away equally as quickly – almost always on bicycles.

The Partisans gave Lt. Schneider an offer, to be escorted over enemy lines and possibly be caught or to stay,  They pleaded for him to help them and fight with them.  He gave in and chose to join the Bolognese Partisans, who then gave him an Italian ‘battlefield’ name – Gianni.

The Battle of Porta Lame is an episode of Italian resistance during World War II. It was fought on November 7, 1944 near Porta Lame in Bologna and saw detachments of the 7th GAP (Gruppi d’azione) Partisans engage German Nazi forces and Italian Fascist forces. Despite the superiority of the German and Italian forces, the partisans managed to escape the progressive encirclement of their positions. 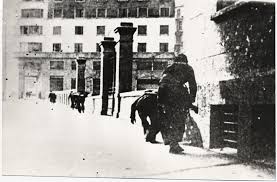 William Michelini, a Partisan, remembered John Klemlen (Samuel Schneider) well, riding a bicycle and the pistol in his pocket for some or other mission on the streets of Bologna.  He recalled a very brave South African officer, who at the height of the Battle of Porta Lame in the afternoon, was surrounded by enemy fire, remaining behind giving cover fire for retreating Partisans.  He was wearing a leather jacket and a fur collar – an aviators jacket.  He was killed in action later that day – November 7, 1944.

His name is recalled every 7th of November during the ceremonies dedicated to the anniversary of the battle and a beautiful garden inside the ‘Parco del Cavaticcio’ park is named in his honour.

Other South African pilots, like Lt Cecil William Emil Blake who escaped from a POW camp, also fought with Italian Partisans and he got the Army Military Cross for his ground action.  It’s well about time we honoured these men in South Africa and if this article goes some way to raising awareness so much the better.

Every Sunday, for many years now, the local Italians who either remember Lt. Samuel Schneider and those who honour his memory in the liberation of Italy from Fascism and Nazism, bring him a flower and place it on his headstone. 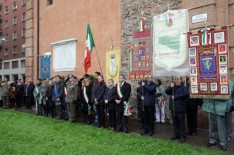 Authors note: My most sincere thanks to Fabio Liverani, a subscriber to The Observation Post Facebook Page for highlighting this most brave and honoured South African and bringing this history to our attention.

3 thoughts on “A rose for a South African war hero, honoured every week in Italy, forgotten in South Africa!”