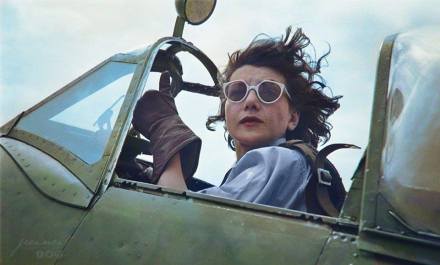 This is a very special South African military heroine. Jackie Moggridge (born Dolores Theresa “Jackie” Sorour), during the Second World War she left South Africa for England and joined the ATA Hatfield Ferry Pool on 29 July 1940, being the youngest of the female pilots to take part in the Battle of Britain, aged just 18.

The ATA “The Air Transport Auxiliary” was charged with delivering new and repaired aircraft to front-line Royal Air Force squadrons and were flown by civilian commercial pilots and female pilots excluded from flying roles deemed as “combative” service at the time.

The initial plan was that the ATA would carry personnel, mail and medical supplies, but the pilots were immediately needed to work with the Royal Air Force (RAF) ferry pools transporting aircraft. By 1 May 1940 the ATA had taken over transporting all military aircraft from factories to Maintenance Units to have guns and accessories installed. On 1 August 1941 the ATA took over all ferrying jobs. This freed the much-needed combat pilots for combat duty. At one time there were 14 ATA ferry pools as far apart as Hamble,  Southampton, Portsmouth, and Lossiemouth near Inverness in Scotland.

The ATA recruited pilots who were considered to be unsuitable for either the Royal Air Force or the Royal Navy Fleet Air Arm by reason of age, fitness or gender. A unique feature of the ATA was that physical handicaps were ignored if the pilot could do the job, thus there were one-armed, one-legged, short-sighted and one-eyed pilots, humorously referred to as “Ancient and Tattered Airmen”. However, most notably, the ATA allowed women.

As part of unique and very brave bunch of pilots, mainly women, Our South African hero, Jackie safely handed over 1,500 aircraft during the war, 83 different types and 200 more than any other ATA pilot.

She had a very lucky escape on 5 January 1941 when ferrying an Oxford Mk I to RAF Kidlington, Oxfordshire, with no R/T to meet up with 1st O Amy Johnson who was bringing one in from Blackpool. Both went off course in adverse weather conditions, with Johnson following the rules, bailing out and drowning in the Thames Estuary. Sorour went down to a few hundred feet and found herself over the Bristol channel with 20 minutes fuel remaining. She claimed that she did not want to take to the chute because she had broken her leg during a parachute jump in 1938. 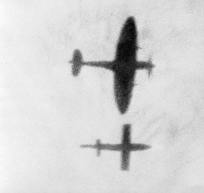 Jackie also encountered a V-1 flying bomb in the air over Surrey while flying a Tempest. She altered course, fully intending to attempt to topple it with her wing tip but failed to catch up to it.  The standard practice in dealing with a ‘doodlebug’ (as the V1 was nicknamed) was a wingtip topple, it threw the flying bomb’s gyro off its intended target and sent it into open countryside instead of a city.  However the trick was to fly faster than the rocket to do it.  The picture featured shows this remarkable manoeuvre between a Spitfire and an unmanned V1 flying bomb.

Jackie was also the first woman in South Africa to make a parachute jump. (4,000 feet). She was South Africa’s youngest pilot of her time age 17 years. November 1959 was awarded Jean Bird trophy as Woman of the Year . She flew Lancasters, Spitfires and a variety of other planes as a RAF pilot during World War 2. She logged over 4,000 hours flying over Europe, North Africa and the Middle East.

She is best described by her Daughters “Jackie was like two women in one: artistic, romantic, forgetful and disorganised, but when she climbed into an aeroplane she became focused, calm and very capable – not our mother at all! She loved many things: singing, dancing, sewing and painting, but her main passion in life was flying. Up in the sky is where she belonged.”

“She really was two women in one. She was a real battler for women to get on in life and just could not imagine that there was anything she could not try to achieve. But she knew, and said, that as a woman she had to have the best results to be taken seriously.”

She was a member of one very elite group and one of only five women to be awarded full RAF wings during the war, Jackie even campaigned to become the first woman to break the sound barrier but was prevented from doing so by the powers that be.

The actions of the ATA are best summed by Lord Beaverbrook in 1945 who said;

“Without the ATA the days and nights of the Battle of Britain would have been conducted under conditions quite different from the actual events. They carried out the delivery of aircraft from the factories to the RAF, thus relieving countless numbers of RAF pilots for duty in the battle. Just as the Battle of Britain is the accomplishment and achievement of the RAF, likewise it can be declared that the ATA sustained and supported them in the battle. They were soldiers fighting in the struggle just as completely as if they had been engaged on the battlefront.”

After she died, aged 81, in 2004, Jackie took to the skies one last time, for her ashes were scattered from the ‘Grace’ Spitfire ML407.

She is now proudly acclaimed as one of ‘The Female Few’ whose actions in The Battle of Britain and for the duration of the war brought us the freedoms we know today.