The inconvenient truth to the modern African National Congress driven narrative of what and who qualify ‘struggle heroes’ is that this movement was the first really significant ‘mass’ protest movement against Apartheid, and it was made up of mainly of white war veterans, led by a white Afrikaner – that’s a fact.  By no means was The Torch Commando small either, at its peak it boasted 250 000 members and their protests attracted between 30 000 to 75 000 people.

They highlight the following:

The Torch Commando concerned itself only with the Coloured Franchise – This is incorrect.

The Torch Commando Manifesto called for Liberty, Freedom of Speech, Liberty from Tyranny and Freedom of Religion. Sailor Malan’s personal politics which he brought into the Torch revolved around addressing poverty in the black community and economic empowerment. Franchise and political reform is actually something Sailor Malan saw as secondary.  Funnily, Sailor Malan was years ahead of time in this regard, as it is only now that politics in South Africa is focusing on freedom from economic emancipation ahead of political emancipation.

The Torch Commando in Natal was particularly focussed on the cessation of Natal from the Union of South Africa in 1950, now that Afrikaner nationalists were in absolute power in controlling the Union.  Natal had a predominately English speaking voting public who were very loyal to their British origins.  This issue of cessation in Natal brought The Torch Commando into direct conflict with the United Party (Smuts’ old party and by then it was now the official party in opposition) and The National Party in that province.

A key objective underpinning the Torch was to remove the National Party from power by calling for an early election, the 1948 ‘win’ by The National Party was not a ‘majority’ win, but a constitutional one, and the Torch wanted a groundswell to swing the ‘service’ vote (200 000 in a voting population of a 1 000 000).  The Torch at its core was absolutely against The National Party’s Apartheid ideology and viewed their government as  ‘unconstitutional’ when they started implementing policy.  This is why the Torch Commando found itself in bed with Smuts’ old United Party in opposition in the first place.

Other issues also sat at the core of the Torch, one issue was the Nationalist’s headstrong policy to make South Africa a Republic, whereas the ‘servicemen’ had fought alongside the British commonwealth – and they wanted South Africa to retain its Dominion status, remain a ‘Union’ and remain part of the Commonwealth of Nations. 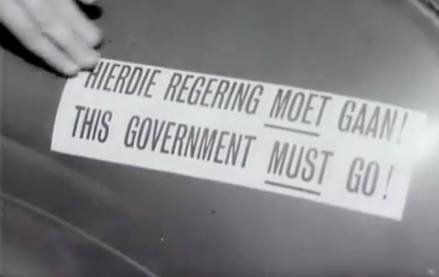 It is also incorrect to assume that The Torch Commando did not feel the sting of repressive and violent government counter actions.  There is a recorded case of a clash of Torch Commando protestors in Cape Town and the Police, who were sent to break up a secondary march onto Parliament, it was also met with further threats of violent repression by the Nationalist government after that incident.

The 1780 Xhosa Rebellions and other tribal uprisings precede The Torch Commando as the first mass uprisings against Apartheid – This is incorrect.

With regard the Xhosa wars, South Africa was not a country in 1780.  The South African Union was established in 1910.  Preceding that the various British Colonies and Boer Republics that would ultimately become a Union had different policies on race relations and the conflicts against these policies need to be viewed in relation to the Colony or Republic concerned, as they all differ very much from one another in both policy and historical context (even between the two British colonies of the Cape and Natal).

Movements like the 1913 Women’s Anti-Pass movement, the founding of the ANC in 1912, the 1946 African Miners Strike, Mahatma Ghandi’s civil dissonance campaign – all precede the Torch Commando as the first Anti Apartheid mass movements.  This is incorrect.

The is a very big separation between race politics in the Smuts epoch and the Apartheid epoch. Race politics existed in South Africa during the Smuts era, of that there is no doubt.  However Smuts was addressing it and political resistance on a really ‘mass’ basis from from these communities did not really exist at the time.  Smuts and his politics are complex, he initiated violent counter action to any dissonance by striking miners or Afrikaner rebellions (whether Black or White, it mattered not a jot to him) but more often than not used dialogue, and a lot can be said to the fact that the ANC in fact supported Smuts’ decision to take the country to war in 1939/40.

The fact is that prior to 1948 ‘resistance’ on a mass level to Smuts’ policies came from the white sector, and it came from fierce Afrikaner nationalists who had joined organisations like the Ossewabrandwag and Nazi grey shirts, whose objective was to topple the Smuts’ government by force of arms.  The Ossewabrandwag had about 200 000 supporters, these were the true resistance and mass movements facing the Smuts epoch.  They were the biggest threat to the Union of South Africa and Smuts’ biggest political headache.

The 1946 miners strike, was a one week mass strike action which ended in violence with government forces, the underpinning problem was a wage dispute, it was settled with a 10 shilling per day minimum wage (an increase from 2 shillings), and improved working conditions as the basis of the strikers demands.  This action needs to be viewed as dispute on wages and conditions of miners with the mine companies primarily.  It was not really a political protest against an entire system of government.

The 1912 Anti Pass Women’s movement needs to be viewed in context with the British Suffrage Movement which they chose to follow, and revolved around a worldwide problem of female political representation (in Europe as in Africa). Gandhi’s Satyagraha campaign against pass laws eventually succeeded in 1914.  Smuts’ and Gandhi actually became friends over the process and admired each other greatly till the day they died.

Post World War 2, Smut’s approached the 1948 elections with the idea of giving franchise to South Africa’s Black population on a phased and qualification basis.  He had promised Black Community leaders to give more political representation to the Black community if they supported the war effort – which they did.  It was these proposals and policies which went up against the National Party’s Apartheid policies in the 1948 elections.  It was Smuts’ willingness to address the African franchise issue that led to his failure in the elections, with the Nationalists playing into ‘white fears’ of Black African political empowerment which swung the vote to them.

Apartheid as an institutionalised policy started in 1948.  The first mass protests against this institution started in 1951.  The people who led this mass protest action were The Torch Commando, and not the ANC, their ‘Defiance Campaign’ came later.  Prior to this the proper ‘mass action’ against the Smuts’ government came primarily from disaffected and militant Afrikaner nationalists in their hundreds of thousands wanting an Apartheid state. That’s a fact.

The Observation Post is re-writing history.  This is incorrect

The intention of highlighting The Torch Commando is that it was ‘written out of history’ by The National Party and remains ‘written out’ for political expedience by the current government.  It is a ‘inconvenient truth’ as it highlights a mass movement of pro-democratic white people not in alignment with Apartheid.  It challenges the prevailing malaise of thinking in South Africa – that everything prior to 1994 was ‘evil’ and white South Africans must therefore share a collective ‘guilt’.  The purpose is to highlight great men like Sailor Malan and movements like the Torch Commando, uncover their hidden history and enter their contributions into the annuals of progressive South Africans who sought change and universal franchise and honour them as such.

Sailor Malan at a Torch Commando Rally in Cape Town

12 thoughts on “‘New’ rare footage of The Torch Commando in action, the first mass protests against Apartheid by WW2 veterans.”