Now there are pilots with skills and then there are a cut above, this pilot is a cut above. On 1 May 1986, a South African Air Force Dakota while on a flight to Ondangwa at about 8000 ft was hit with a soviet SAM-7 shoulder fired surface to air missile. The explosion ripped off most of the Dakota’s tail. To add additional pressure to the crew, the Dakota was full of military VIP passengers including the Chief of the Army.

Captain Colin Green slowed the Dakota down to 100 knots in order to keep it under control and put in a mayday call. There was a SAAF helicopter in the area which formatted on him and relayed the damage to him. The helicopter crew also took this amazing picture showing the landing. 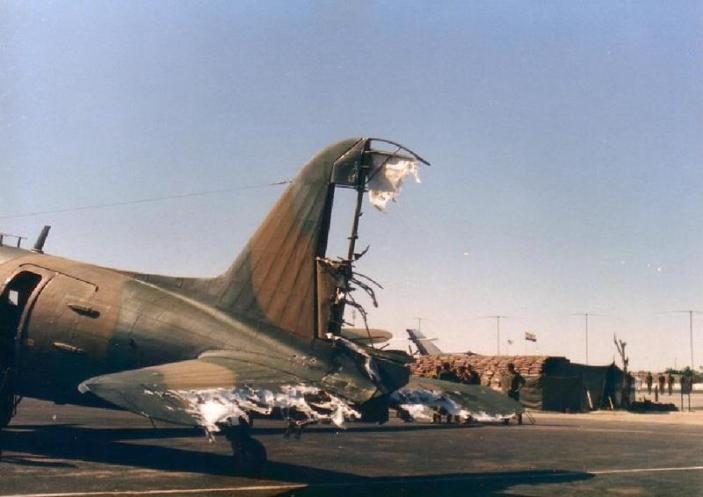 To note from this picture is that the Dakota has lost all of it’s rudder and both sections of the elevator. This is an unrecoverable situation in most aircraft types and also a situation most pilots cannot recover the aircraft from in any event.

To compensate on the loss of stability Captain Green ordered the passengers around the aircraft to regulate the centre of gravity before going into land. Using flaps and throttle power to control the pitch (up and down) and thus control his decent rate and air speed, he landed it onto the tarmac, ‘greasing’ the centre line in a perfect landing.

Captain Colin Green was later awarded The Chief of the SADF Commendation for his exceptional flying skills.

4 thoughts on “Precision landing with Rudder and Elevators shot away = SAAF Hero!”