This is a letter of thanks from Field Marshal Jan Smuts sent to every single South African who served in the armed forces during World War 2.  It formed part of his demobilisation debrief . This particular one belongs to my Grandfather – Sgt. Albert Edwin Dickens – and he cherished it so much that it survives to this day. 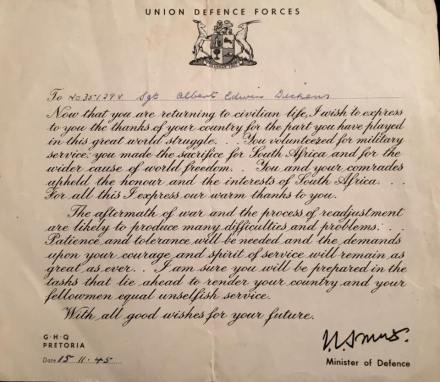 A simple thank you goes a very long way, decades later I was to serve in the South African Defence Force as a conscript and no such thank you letter was ever given to me – not even so much as a verbal thanks let alone in writing.  Not just me, generally thousands of South Africans called into service of country as conscripts (and even permanent force) received nothing for it by way of a thank you, or even a simple demobilisation debrief in many cases.

Some units in the ‘old’ SADF were a little better than others and some have received thanks from Unit, Regiment, Corps, Squadron, Ship or Battalion commanders, some even received a formalised demobilisation debrief, but many did not (in fact most).  As a result many South African military veterans are now left with deep-seated disgruntled attitude of “what was it all for”.  My Grandfather and his generation of military veterans had no such dilemma.

This simple letter of thanks from the Prime Minister goes a long way to demonstrate the vast difference in attitude between South African forces which operated under Smuts as opposed to those who operated in the statute forces under the National Party. Herein lies a key difference between the United Party under Jan Smuts and the National Party under P.W. Botha. When it came to serving the country, the one displayed gratitude the other often displayed arrogance.

Jan Smuts even went further, at the end of the war he sent a thank you letter to all the South African families who had lost loved ones during the war along with a special commemoration plaque, here’s an example of it.

In addition to these letters and brooches, Jan Smuts also issued commemorative plaques to families who lost members in the war bearing the person’s name.

As to arrogance, it is also not only the Afrikaner Nationalists, in 1994, I volunteered to remain with the newly formatted SANDF as a Reservist and to date have not received anything from an African National Congress State appointed State President of South Africa by way of a simple thanks.  As to a signed letter from the State President sent to other SANDF members demobilising – I’ve not yet seen one issued to anyone.

Perhaps there is a lesson to the current SANDF to invest in a simple personalised pro-forma letter.   It will go a very long way to install pride and purpose in someone who has risked their life to serve in a South African uniform.

As is very much the custom in the USA, the UK, Australia, Canada and New Zealand, when next you see a UDF, SADF or SANDF military veteran on parade or veteran members of the South African Legion of Military Veterans and MOTH collecting funds for poppies of remembrance or participating in charitable contribution – be sure to walk up to them, shake their hands and give them a simple thank you, it will mean the world to them – because to date there is a very good chance nobody else has.

P.S. A sincere thank you to Maureen Lindsey Paine for allowing me to share her Mother’s letter and brooch which she now wears with pride every Remembrance Day.

4 thoughts on “A simple thank you would be nice!”