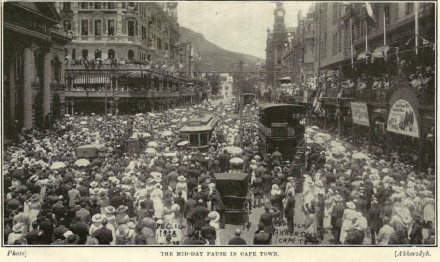 Did you know that the two minutes silence and its association to Armistice Day (11/11/11) or Remembrance Sunday has a uniquely South African origin?  The featured image, taken in 1918 captures this South African gift to the modern-day Act of Remembrance.  It shows the mid day pause in Cape Town – the entire town at standstill to remember the tremendous sacrifice of South Africans (and British) servicemen and women in World War 1.

At the request of Sir Percy Fitzpatrick (the author of Jock of the Bushveld), this mid day Cape Town ritual was adopted by King George V a year later in 1919 when he decreed it as the international bench by which Britain and all her Commonwealth were to remember the fallen and sacrifices of war.  This amazing story is covered in a previous Observation Post (for an in-depth read see this link The ‘2 minutes silence’ is a South African gift to the Act of Remembrance).

Accompanying this image is an amazing eye-witness account of this very South African event which now shapes how the Western World and many other modern states now remember the fallen.

Read on for a fascinating and riveting first hand account that should make every South African very proud of our heritage and our contribution to remembering human kind’s sacrifices in the quest for universal peace and individual freedom.

One of the most memorable institutions of the 1st World War period in Cape Town was the Mid-day Pause, when, every day on the stroke of noon, all the traffic of the city was suspended for two minutes, whilst the crowds in the streets bent their heads in silent prayer and communication with our soldiers who were fighting and dying in France.

“I was walking along Adderley Street, talking to a friend, when a street clock overhead began to utter its twelve strokes. Before it had done striking- at its fourth or fifth stroke – the boom of the Signal Hill gun came and a bugle from Cartwright’s balcony began to sound the “Last Post.” And immediately everybody and everything in the street and all around, and in the side streets, stood still – quite still.

Stood absolutely still! If you have not seen it, you can hardly imagine it. For, believe me, it makes some demand on the imagination. No written or printed words can describe the suddenness of it. The boom of a cannon, the note of a bugle, and then every man’s head bared, as if by one single gesture – and after that no more sound, no more movement. Just complete silence, complete stillness, like that of a quiet gathering in the churchyard at the terrible moment when a body is being let down with silent ropes into the earth. And this in the crowded street of a big city!

In the first few seconds of the pause your ear detected the last traces of sound and movement – the angry oath of a wagoner as he pulled his team to a stand-still; the final jingle of a set of hansom-cab bells, the last throb of a motor car, the brief echo of a tramway gong, the last interrupted shrieks of a group of coloured boys who were dragging down from Longmarket Street a box on wheels, loaded with vegetables. In two or three seconds – quicker than you could say the words – these faint remnants of human sound and movement had died away. Then it was all silence: all stillness.

Think of it! The whole life, movement and action of this busy little world of Adderley Street suspended, stopped, stricken dumb, petrified. As if by some sudden act of the supernatural, every moving body and every moving thing had been turned into stone or iron. A sea-bird in the distance, circling over the stunted turret of the pier, a stirring of the folds of a drooping flag on its mast above a tall building as it catches the breeze. Besides these, no movement – not a sound, not a tremor, but the quiet breathing of those that are near you in the crowd.

The sudden and solemn unanimity of this pause in the very midst of the city’s day gets a queer grip on your emotions, gets somehow down deep inside you. From an almost indistinguishable group, high up at the corner of the upper balcony of Mansion House Chambers building, there comes the strains of “The Last Post,” trumpeted over the heads of a silent and motionless city. The proud melancholy, the gallant, triumphant sadness of those last, wailing, silvery notes seemed to find an echo in the very depths of your heart. You felt the curious lump in your throat, and you had an idea that in the intense stillness and silence everybody around you was aware of it. Your hand fidgeted with the hat you held in it. . . . But then you perceived that nobody was paying any attention to you – that everybody was absorbed in his own emotions of those silent minutes. . . . You saw here and there a woman in black fumbling secretly for a handkerchief, and you pictured her having some special interest, some special sorrow, in one of the rows and rows of bare crosses in Delville Wood, in Gauche Wood. . . . “The Last Post”!

Bugler playing The Last Post from the Cartwright’s balcony

The sound of the bugle dies away on the last sad, heroic note. The motionless detachment of the crowds is emphasised by a succession of sounds that emerge out of the background of silence – the distant shriek of a railway engine, the impatient neighing of a horse somewhere down the street, the near-by throbbing of a motor-lorry that is in a hurry to be on its way again. But I think that what to me most emphasised the solemn stillness of the occasion was that while I stood in the roadway, midway in the “pause” there came from some shop or office behind, the ringing of a telephone bell. This telephone bell was plainly audible to the motionless crowds in the centre of Adderley Street. It rand and rang and rang with a faint, distant tinkle, but there was no one to answer it ; for even in the shops and offices the clerks, the attendants and the customers were standing rigid in communion with the heroic and distant dead. It tinkled on and on, and then died away altogether ; and there was nothing left but silence and the bared heads of men and the bowed heads of women ; and dear thoughts and sad memories and – here and there – tears in the eyes of brave women, as the big clock overhead shifted its longer hand to one minute past twelve, two minutes past. . . . .

And then, at a quick signal, the silenced and the stillness were broken. The two minutes’ pause had expired. The motor cars, the trams, the taxis, the cabs, the wagons, all began to move again (just as if someone had begun to turn the handle of a moving picture machine), and the human beings resumed their ways up and down and across the street. The fez of a Malay cabdriver that I had been observing over the heads of the motionless crowd – a scarlet spot against the yellowish and windowed wall of the Post Office – now moved along, with a whip lashing the air overhead. The confused and animal-like bleats and groans and moans of taxis and motor cars filled the street again. The gongs of the tramcars made a background of discordant, riotous brass. The carts and the heavy wagons began to creak and rumble again : their drivers waved their long whips and shouted. The effect was just as if a cinematograph operator, finding his film “stuck,” had got control of it again.

It was all over until tomorrow. Tomorrow, again, at twelve o’clock, there would be the communion of the strong and living with the dead and dying and the wounded, of the people comfortably at home in Cape Town with the souls and thoughts of their beloved brave who were offering their young lives in France. . . . .

And these are my feeble impressions of the mid-day pause – feeble, because written or printed words can convey no real sense of the beautiful simplicity and brevity of the ceremony, its unrehearsed, spontaneous order and decorum, its complete and most reverent silence – a sharp, clear-cut interruption in the day’s traffic of the city.”

The Last Post followed by 2 minutes silence, this official video of The National Memorial Arboretum in the United Kingdom captures sentiment and legacy of the pause as would have been experienced in Cape Town in 1918 after the Last Post was played.  Play it to the end and reflect the event in your ‘minds eye’, imagine the sacrifice – it’s very poignant and moving.

Researched by Peter Dickens.  Extract and featured image taken from a condensed article; “The Celebration of Peace” Booklet, issued in 1919 by the Cape Town Peace Celebrations committee for distribution throughout the Schools of the Cape Peninsula.

3 thoughts on “The 2 minutes silence; an eye witness account of South Africa’s unique gift to Remembrance”