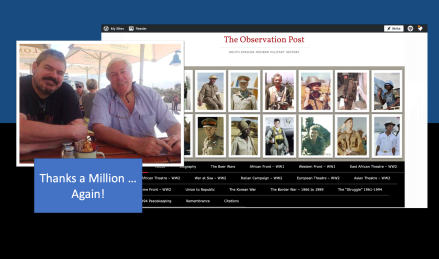 So here’s to the second million Dad! Thank you all who support this education website and blog, the past year has been tough, I was hospitalised with Covid 19 for 8 months (yup – read that again, eight friggin months and given a 1% chance of survival), so I am deeply appreciated that despite the inactivity for nearly a year the site continued to grow and continued to receive substantial support. The good news, I survived Covid (a little bent, but not broken) against all odds and I’m back on it like a bonnet.

I started this blog in November 2015 after my father’s death in Hermanus, South Africa – fondly known as ‘Professor Dickens’ to many locals (he was a visiting Prof at UCT), in a way it is a homage to the library of military history books he left to me to reference, his passion for the subject and it was really set up in his memory.

In my small way I wanted to capture the joint passion for the subject we both felt, debated and endlessly discussed over a glass of whiskey – very often overlooking Schulphoek bay from his art gallery surrounded by all his military aviation and maritime artworks.

The work in essence was a cathartic experience for me at the difficult time of my Dad’s death as it gave vent to all the knowledge and nuggets of South Africa’s military history imparted to me or inspired by my Dad, and I’m extremely happy to share all his legacy, he would have been pleased as punch with it – there are now 358 stories published, 58 stories currently been ‘polished’ waiting, and in my noggin there are at least 200 more stories waiting to out.

It has been an experiment to use this type of media for blogging history, much to the horror of some historians, as by nature social media lends itself to social interaction and opinion, so no, there are no stuffy footnotes and cross reference numbering you would expect in a history treatise, such an approach defeats the type of media used. What this form of modern communication and media does is drive interest into a subject normally discarded as boring, it rejuvenates dull date driven historical humdrum and creates conversation through sharing and interaction.

I’ve been taken aside by some historians and criticised – too much ‘factor analysis’, too much ‘causal history’, too heavy on ‘opinion’, too ‘open ended’, too much individualistic ‘writing style’, too many spelling errors etc etc, my response often is that their traditional papers and publications have reached a couple of thousand people at best, mine have reached a couple of million .. that is the power of modern internet based social media and that is the future, like it or not, and this is how it works – bite sized content drivers using enticing thought and conversation triggers. Other historian friends of mine are loving it, in fact many are a little envious, and thankfully I am now getting some serious support in key circles – academic departments at leading universities and recognised national history societies in South Africa have started to give this site (and me) a nod. I’m also getting a large dollop of encouragement from some heavy weight history academics now, especially those specialising in military history.

Funnily, the approach I use I learned whilst majoring in History at Rhodes University, basically taking ‘political’ history (which most of us learn at school) and challenging it using ‘economic history’ (and its internalised disruptor – ‘feakonomics’) and ‘social’ history in addition to draw new understanding and interesting insight. Sometimes it can make for a really fun read as it can take an old dusty ‘fact’ which everyone thinks is fully concluded and suddenly it’s on its head.

Aside from my Dad, ‘Thanks a Million’ … again …. to you, all the avid followers of the blog, the readers of the material, it’s your support which keeps it going and it’s your feedback that motivates me to bring more historical nuggets so often gleaned over, written out of the school history books and ignored for political expediency in South Africa.

Here’s to the next Million Dad – Cheers!