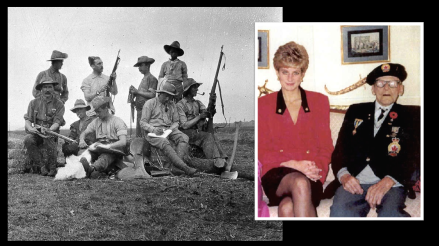 In 1992, the last Boer War survivor appeared at The Royal British Legion’s Festival of Remembrance at the Royal Albert Hall in London and later laid a remembrance wreath at the base of the Cenotaph in Whitehall. He was 111 years old, his name – George Frederick Ives, born in Brighton, England on 17th November 1881 and he served in the British Army for 18 months and served in South Africa during The South African War (1899-1902). He was the last combatant survivor from either side and it was his last known public appearance.

It remains amazing that in living memory of many today, right up into the 90’s, stood a veteran of the Boer War, think about his longevity, he was still alive when Gulf War 1 broke out between 1990 and 1991 – he saw war from a horse drawn age, before the invention of the airplane – right up to jet-aircraft ‘shock and awe’ warfare and the nuclear age, we can only wonder now what he thought of it. This is his story.

At the on-set of the war from 11th October 1899, the British suffered tremendous set-backs when the Boer’s declared war and invaded the two British Colonies, the Boer sieges and shelling of British garrisons and civilians alike in Ladysmith, Mafeking and Kimberley, incensed and immediately spurred many in the United Kingdom to join up and fight – including George Ives, citing “Black Week’ – the British losses to the Boers whilst attempting to relieve the sieges at the battles of Stormberg, Colenso and Magersfontein from the 10th to 17th December 1899 as his reason. George initially enlisted as Private in 2nd Volunteer Battalion, Bristol Engineers.

Clearly the British had a fight on their hands and by January 1901, George really wanted to get to South Africa, before the war he had experience training horses and considered himself a good jockey, so he attested to join the Imperial Yeomanry (voluntary mounted infantry) as a Trooper, number 21198. His height was 5’6, his eyes dark blue, hair black, and trade listed as a grocer. He trained in England until the end of February, when he proceeded to South Africa with the 1st (Wiltshire) Company, 1st Battalion, Imperial Yeomanry.

With the Yeomanry in support of Scottish troops, and thanks to his training on horses, George became a Cavalry Scout. He would spend days in the saddle as a messager often riding far into ‘enemy’ territory to connect between British detachments, he would regularly cover distances upwards of 80 km through enemy territory which he managed to do by taking two horses and hiding in the hills during daylight hours.

Horses were an important part of the military campaign in South Africa. Many, many years later in television interview George would chuckle and wryly observe that “There were lots of veterinaries but not many doctors. A horse cost £40 while a man was only worth a dollar.”

March 1st, 1901 to August 27, 1902, George fought on patrols in the Transvaal, Orange Free State and the Cape Colony. work in the hot South African sun riding on the open veldt, ‘water’ almost became an obsession for George. In the same interview many years later, George described what these patrols were like:

“We started out in the morning early, had a good camp breakfast, filled our water cans up with coffee, and we went. Before the sun was up any strength at all, nearly all the drink had gone. We was all day and we’d chew stones in our mouth and try and agitate a little saliva. Finally we got to the end of the trip and fell off the horse, the horse was thirsty too, and we’d throw some water in our mouths and on the back of our neck, and when we looked up [we] discovered there was two dead mules in the same pond, but it didn’t matter about mules rotting, you had to satisfy your thirst.”

In the same interview Ives recalled his proudest moment during the war:

“The most important [moment] was when the Captain had us fall in, get in line, it was after supper, at night, and when they were all there he said ‘Ives take ten paces forward’ and I stepped forward ten paces, and he says to the company: ‘here is the man who was scouting through 70 miles of enemy territory several times’. The captain then said give him a cheer, and they said ‘hoorah, hoorah’ and I went back in line.”

In 1902 George immigrated to Canada, in 1990, he told the Vancouver Sun that he flipped a coin – heads Canada, tails New Zealand. The coin came up heads, and George Ives became a farmer in British Columbia. When World War 1 broke out he volunteered again, but was rejected when they identified a heart murmur.

He would raise six children with his wife of 76 years, Kate (Kitty). He worked as a farmer, logger and then a boat builder, his wife died 1987 when she was 98.

Living in Aldergrove, he would regularly attend Remembrance Day celebrations, well into the 1980s in Aldergrove, George Frederick Ives would get onto his feet and stand attention for the moment of silence, and his identity as a Boer War veteran announced to the crowd, as well as his age – well over 100 at this stage.

When George Ives returned to the United Kingdom for the last time in November in 1992, he was deemed to be the oldest man to have flown the Atlantic. He was also accompanied by his youngest daughter (76) and his nurse. During his visit he had tea with the Queen Mother, Princess Diana, Lady Thatcher and had a tour of Downing Street.

As far as the last surviving veterans of the Boer War goes, George outlived the last ‘Boer’ veteran, believed to be Pieter Arnoldus Krueler (1885–1986) – the famous ‘4’ war Boer, who served on the ZAR side during the Boer War, then in both World Wars, the Spanish Civil War and was a mercenary in the Congo Crisis – another very interesting figure from the Boer War (another contender for ‘oldest’ Boer fighter was Herman Carel Lubbe who died on 11 August 1985).

George Frederick Ives eventually died five months after his famous UK visit, back in Canada, in Aldergrove’s Jackman Manor at the age of 111 on April 12, 1993, the last surviving Boer War veteran and the oldest man in Canada at the time.

Take a learning on longevity here, George Ives, was married for 77 years, smoked for 89 years and his secret for longevity was a glass of brandy and water which he took at 3am every morning! George is officially the second oldest British military veteran ever, at 111 years, 146 days, his record was only broken on 1 November 2007 by World War 1’s last combatant British survivor Henry Allingham (who also funnily credited “cigarettes, whisky and wild, wild women – and a good sense of humour” for his longevity). They just don’t make em like this anymore.

3 thoughts on “A glass of brandy in the morning …”