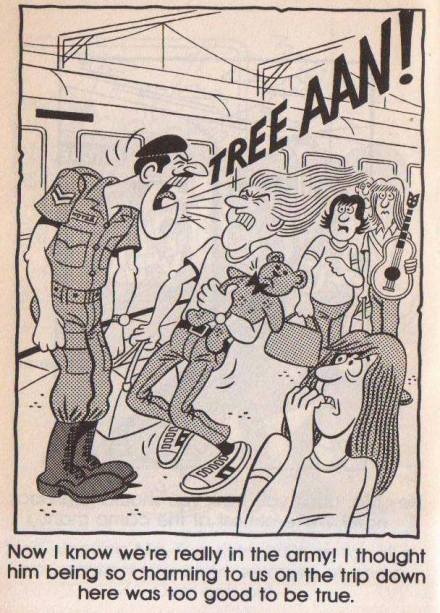 The beginning of the new year in the 1960’s, 1970’s and 1980’s (even the early 1990’s) meant the dreaded “January Intake” and thousands of white South African men would be starting the new year in uniform.  This cartoon by Keith and Lorna Stevens in ‘Bytvas’ perfectly captures the surprise awaiting the new national servicemen  at their respective intake mustering points.

In reality the yelling Army corporals at the mustering points were usually “campers” (civilian force members who had completed the initial national service period) from Reception Depot units (RCD/OVD) attached to the various regional commands – the RCD/OVD units were responsible for the two annual “intakes” and the security of the convoys of recruits to all the respective training units, the largest such unit was 15 RCD/OVD which was attached to Witwatersrand Command (the largest catchment area).

Such was the radical changeover from “civvie street” that to every person who ever served as a conscript in the SADF – the first day in the SADF is emblazoned in their memories forever.

“Tree Aan” is the Afrikaans command to “form up” on parade.

One thought on “Welcome to the Army … TREE AAN!”