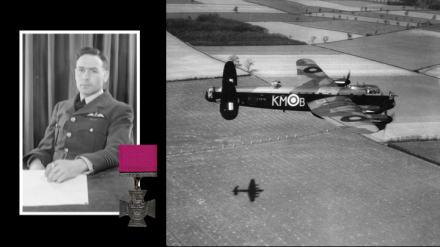 Rare that we see an image of a South African Victoria Cross recipient in action, but this is one such image. Flying this exact Avro Lancaster bomber is a Natal lad – Squadron Leader John Dering Nettleton VC.  Now, not many South Africans have heard of him – and why is that?

Lancaster B Mark I, L7578 KM-B, of No.97 Squadron RAF, piloted by Squadron Leader J D Nettleton of No. 44 Squadron RAF, flying at low-level over the Lincolnshire countryside during a Squadron practice for the low-level attack on the M.A.N. diesel engineering works at Augsburg. 97 Squadron lent L7578 temporarily to 44 Squadron, who repainted the aircraft with Nettleton’s unit code-letters. Nettleton actually flew R5508 on the operation.

Nettleton is another true South African hero and recipient of the Victoria Cross (VC), the highest and most prestigious award for gallantry in the face of the enemy that can be awarded to British and Commonwealth forces. His VC was one of five awarded to South Africans in World War 2 – however very little is known of their stories in South Africa.

Simply put, after the war, the National Party came to power in 1948 they almost immediately dismissed all South Africans who had served in the war as ‘traitors’ to the country for supporting what they saw as ‘Britain’s war’.  During the war the Nationalists had vocally supported Nazi Germany (as Germany had supported the Boer cause during the 2nd Anglo Boer War and Afrikaner nationalism was grounded on punitive British measures taken out on the Boers during this war), many Nationalists had even adopted national socialism and embarked on sedition during the war (see “Mein Kampf shows the way to greatness for South Africa” – The Ossewabrandwag).

For the Nationalists, on the top of the list of ‘traitors’ were the South Africans who distinguished themselves winning Victoria Crosses whilst serving in ‘British’ Regiments or Arms of Service.  These were men, who in the eyes of the Nationalists, served the hated British and were not to heralded as heroes, lest their deeds specifically influence young South Africans.  For this reason very little in South Africa is named or honoured in the names of Gristock, Norton or Nettleton.

So lets pull away this veil and reveal some true South African heroes whose very noble exploits and deeds in ridding the world of Nazism all of us as can stand very proud of.  What better way to start with John Nettleton VC – this is his story. 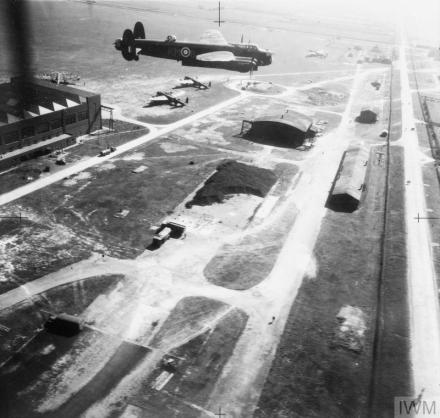 John Dering Nettleton was born on 28 June 1917 in Nongoma, Natal Province, South Africa, the grandson of Admiral A T D. Nettleton, he was educated at Western Province Preparatory School (WPPS) in Cape Town from 1928-30, Nettleton served as a Naval cadet on the General Botha training ship and then for 18 months in the South African Merchant Marine. He took up civil engineering, working in various parts of South Africa.

Commissioned in the Royal Air Force in December 1938, he then served with Nos. 207, 98 and 185 Squadrons before joining 44 (Rhodesia) Squadron flying the Handley Page Hampden. He took part in a daylight attack on Brest on 24 July 1941 and in a series of other bombing raids and was mentioned in dispatches in September 1940.

Nettleton was promoted Flying Officer in July 1940, Flight Lieutenant in February 1941 and was a Squadron Leader by July 1941. No. 44 Squadron was based at RAF Waddington, Lincolnshire at this time and had taken delivery of Lancasters in late 1941

.In 1942 a daylight bombing mission was planned by RAF Bomber Command against the MAN diesel engine factory at Augsburg in Bavaria, responsible for the production of half of Germany’s U‑boat engines. It was to be the longest low‑level penetration so far made during World War II, and it was the first daylight mission flown by the Command’s new Avro Lancaster.

Nettleton’s citation for his Victoria Cross is quite explanatory of the attack and the rest of the story picks up from here:

Squadron Leader Nettleton was the leader of one of two formations of six Lancaster heavy bombers detailed to deliver a low-level attack in daylight on the diesel engine factory at Augsburg in Southern Germany on April 17th, 1942. The enterprise was daring, the target of high military importance. To reach it and get back, some 1,000 miles had to be flown over hostile territory.

Soon after crossing into enemy territory his formation was engaged by 25 to 30 fighters. A running fight ensued. His rear guns went out of action. One by one the aircraft of his formation were shot down until in the end only his and one other remained. The fighters were shaken off but the target was still far distant. There was formidable resistance to be faced.

With great spirit and almost defenceless, he held his two remaining aircraft on their perilous course and after a long and arduous flight, mostly at only 50 feet above the ground, he brought them to Augsburg.

Here anti-aircraft fire of great intensity and accuracy was encountered. The two aircraft came low over the roof tops. Though fired at from point blank range, they stayed the course to drop their bombs true on the target. The second aircraft, hit by flak, burst into flames and crash-landed. The leading aircraft, though riddled with holes, flew safely back to base, the only one of the six to return.

Squadron Leader Nettleton, who has successfully undertaken many other hazardous operations, displayed unflinching determination as well as leadership and valour of the highest order

Nettleton survived the incident, his damaged Lancaster limping back to the UK, finally landing near Blackpool. His VC was gazetted on 24 April 1942.

Squadron Leader J D Nettleton VC signing his autograph for a factory worker on a visit to open a munitions factory, North Wales.

Nettleton died on 13 July 1943, returning from a raid on Turin in Italy by 295 Lancasters. His Lancaster took off from Dunholme Lodge and was believed to have been shot down by a fighter off the Brest peninsular. FW 190s of 1./SAGr.128 and 8./JG 2 scrambled from bases near Brest in the early hours of 13 July, and at 06:30am intercepted the bomber stream.

A total of eight bombers were claimed, and at least three Lancasters were almost certainly shot down by the German fighters, one of whom was Nettleton. His body and those of his crew were never recovered. All are commemorated on the Runnymede Memorial.

Group photograph of Squadron Leader J D Nettleton (sitting, second from left) and his crew, photographed on their return to Waddington, Lincolnshire, after leading the low-level daylight attack on the M.A.N. diesel engineering works. 17 April 1942.

The truly unfortunate thing about these heroes is that due to political prejudice – starting with the National Party from their election to power in 1948 (post WW2) and now the current political dispensation in South Africa, the African National Congress (ANC) – these VC recipients are almost unclaimed and unknown.   The result is that very little is commemorated to their memories in South Africa today.

With no known grave there are very few memorials to John Nettleton VC in South Africa, no roads or state institutions are named after him, nothing really significant in his own country acknowledges him (other than the General Botha training ship which have a acknowledgement to this one of the two ‘sailor’ airmen to serve in the RAF).  Like his fellow General Botha training ship compatriot ‘Sailor Malan’, this ‘sailor’ – John Nettleton was also proud to wear the ‘South Africa’ shoulder title on his Royal Airforce uniform (as with all the South African pilots who served in the RAF – see The RAF ‘South Africa’ title worn during The Battle of Britain) and by that simple gesture there is no doubt to where his heart and loyalty lay.

His link to South Africa is so lost to memory that it has even been lost to the British, his name was not even included in the South Africans listed on the Victoria Cross Winners dome at the Commonwealth Gates memorial in central London.  It’s not just John Nettleton’s name that is missing from this memorial, there is a very long list of other South African VC recipients unaccounted for on this memorial, such has been the complete disregard.

As South Africans (in South Africa and in the United Kingdom) this has to be addressed, we should hang our collective heads in shame in the way we have treated our national heroes, and if this website goes a way to helping increase awareness of these unsung South African heroes then so much the better.

Head and shoulders War Commission portrait of Squadron Leader John Nettleton. He wears his RAF tunic, bearing the medal ribbon of his Victoria Cross, as well as his South Africa shoulder badge. At this time Nettleton commanded 44 Rhodesia Squadron.