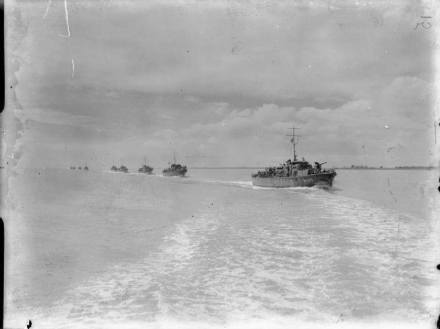 Many people don’t know it – but a small historic fact, the South African Navy was involved in direct engagements with Imperial Japan during the Second World War.

Here ML 475 leads motor launches of the Arakan Coastal Forces in line ahead up the Naaf River on their way to bombard Japanese shore defences and cut cross river communications.

These Coastal Forces were made up of the Royal Indian Navy, the Royal Navy, South African Naval Forces and Burma RNVR and they had covered nearly 30,000 miles in over 40 operations.

Harrassment of Japanese lines of communication and bombardment of shore defences were carried out between the Naaf River and Ramree Islands. Briefed in a Basha hut in their well hidden base, commanding officers return to their ships hidden in the up-river creeks for the nights operations.

2 thoughts on “South African Navy at war against …. Imperial Japan!!”