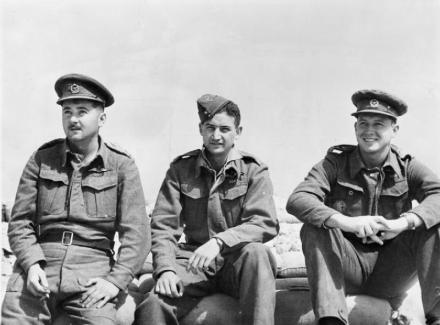 Now this is a unique and rather sad photograph.  Three of South Africa’s most legendary fighter pilots in the North African theatre of operations during WW2, all of which were ultimately killed in action.  Major J E “Jack” Frost, Commanding Officer of No. 5 Squadron SAAF sits between two of his most experienced pilots, Lieutenant Robin Pare (left) and Captain Andrew Duncan, at LG 121, Egypt.

“Jack” Frost joined No. 3 Squadron SAAF as a flight commander in 1940, having been a member of the South African Permanent Force for five years. He saw considerable action in Somaliland and Ethiopia, scoring a number of victories over Italian aircraft, before he was evacuated in May 1941 with acute appendicitis.

On his recovery he was appointed to command 5 Squadron, leading them to Egypt in early 1942 and through the heavy air fighting during the Battle of Gazala in May and June. Although Frost was posted to the staff of No. 233 Wing on 31 May, he resumed command the Squadron when his successor, Captain (now Major) Andrew Duncan, was killed that same day. Jack Frost in turn was shot down and killed over El Adem by German fighters on 16 June.

He was an outstanding pilot and leader, and remains the SAAF’s top scorer with 16 aerial victories.

Robin Pare, also a member of the South African Permanent Force, was commissioned in the SAAF in April 1940 and posted to No. 1 Squadron SAAF, seeing action over East Africa until April 1941. After a period as an instructor in the Union, he joined 5 Squadron in December 1941. He was promoted commander of ‘B’ Flight on 31 May 1942, but was shot down and killed by Oberleutnant Hans-Joachim Marseille of I/JG27 near Bir Hacheim on 3 June, just after scoring his sixth victory.

Andrew Duncan was the son of the Governor-General of South Africa, Sir Patrick Duncan. After qualifying as a pilot with the Active Citizen Force in December 1939, he was posted to No. 1 Squadron SAAF and fought in East Africa. He returned to the Union in April 1941 as a Captain, and joined 5 Squadron in June as commander of ‘A’ Flight. Duncan succeeded “Jack” Frost as the Squadron Commander on 31 May, only to be shot down and killed that evening, south of Acroma, after shooting down his sixth victim earlier.