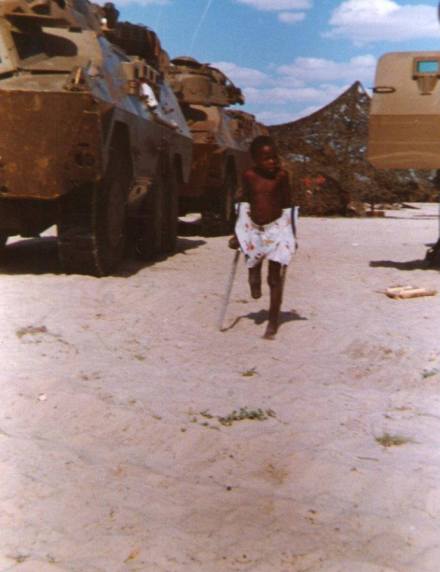 Forgotten to many as to why the Bush War was so closely felt to the South Africans conscripted to fight it, this image illustrates what many conscripts and volunteers felt they where there to do – protect innocent civilians from the ravages of the Angolan war and armed insurgency into South West Africa/Namibia.

A trademark of both the Angolan War and the Bush War was the silent terror of mines, the worst of which is the Anti Personnel Mine (APM). This type of mine is cheap to make can be easily concealed and extensively mined – it has a small charge designed to maim its victim, not kill, simply by blowing off a foot or leg – its design in essense is to demoralise and strike fear into every step.

This picture was taken by a medic whilst they where based temporarily next to the range at 101 Battalion’s Head Quarters in Oshakati during tte ‘9 Day War’ in April 89. This local Namibian child was moving amongst the Ratel Infantry Fighting Vehicles looking for food and entertainment. He remained under the wing of the medics for a couple of days.

Realistically summarised by BJ Taylor who took the photo in light of the frequent sight of such carnage of war on the civilian population as an ‘AP Mine victim, one of many … ‘

One thought on “The silent terror of the Angolan Border War”