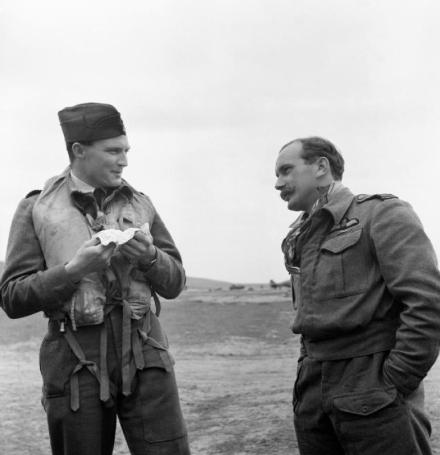 Petrus Hendrik Hugo (left in the headline image), known as “Dutch,” was a South African who joined the Royal Air Force and took part in he Battle of France and the Battle of Britain and went on to become a RAF flight commander.

Along with “Sailor” Malan, another famous fellow Afrikaner to fight in the Battle of Britain, “Dutch” is also widely celebrated as one of the “few” (as coined by Churchill) who kept Britain in the war thereby turning the tide for Nazi Germany and ultimately liberating Europe from a tyrannical ideology.  This is one very brave hero and this is his story. 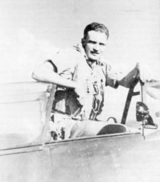 Petrus Hendrik Hugo was born 20 December 1917 on the farm Pampoenpoort in the Victoria West district, Cape Province. He attended the Witwatersrand College of Aeronautical Engineering and in 1938 he went to the United Kingdom to attend the Civil Flying School at Sywell.

Hugo was awarded a Short Service Commission in the RAF in April 1939. His Afrikaans origins and pronounced accent soon earned him the nickname “Dutch”, and he was known by this throughout his RAF careerHe served at No.13 Flying Training School for six months and was assessed “exceptional” at the end of his course. He attended the Fighter School at RAF St. Athan in Wales, and in December 1939, joined No. 615 Squadron RAF at Vitry, in France, equipped with the Gloster Gladiator.

In April 1940, the squadron re-equipped with Hawker Hurricanes. During the Battle of France, Hugo shot down a Heinkel He 111 bomber on 20 May 1940. 615 Squadron returned to the UK and were stationed at RAF Croydon and RAF Kenley.

On 20 July 1940 Hugo shot down two Messerschmitt Bf 109 fighters and shot down yet another Bf 109 on 25 July. He then shared a Heinkel He 59 floatplane with another pilot on 27 July. On 12 August Hugo shot down another Bf 109. On 16 August he claimed a He 111 probably destroyed over Newhaven, but was himself hit by cannon shell splinters from a Messerschmitt Bf 110. Slightly wounded in both legs, Hugo returned to action two days later. He was bounced by Bf 109s of JG 3 and wounded in the left leg, left eye and right cheek and jaw. He managed to crash-land, and was taken to Orpington Hospital. In late August, 1940, the award of the Distinguished Flying Cross (DFC) was announced. By late September he rejoined No. 615, based at Prestwick in Scotland.

In mid 1941 the squadron, now flying the cannon-armed Hurricane IIc, returned to RAF Kenley. On 14 October 1941 Hugo shared a Heinkel He 59 flying boat shot down with three other pilots. He assumed command of 41 Squadron RAF on 20 November, which was flying Supermarine Spitfires, and was awarded a Bar to his DFC on 25 November. On 12 February 1942 during the channel dash of the German battleships Scharnhorst and Gneisenau, he shot down one Bf 109 and damaged a second. On 14 March he shot down another Bf 109 over a German convoy near Fecamp, and on 26th he claimed another escorting Bostons raiding Le Havre. Promoted to wing commander on 12 April 1942, he took over as Tangmere Wing Leader, but on 27 April was wounded again, being shot down in the English Channel. In a running fight with Focke-Wulf Fw 190s of II./JG 26 he claimed a probable Fw 190 and damaged a second but was hit in the left shoulder, and had to bale out, being picked up by Air Sea Rescue. He was awarded the Distinguished Service Order while recuperating at 11 Group HQ.

On 2 December he shot down two Italian Breda Ba 88 bombers of 30 gruppo near La Galite, one being shared, and on 14 a Savoia-Marchetti SM.79. He led 322 Wing for the next four months until posted to HQ, North-West African Coastal Air Force, and also awarded a second Bar to the DFC.

In the header image – Group Captain P H “Dutch” Hugo (left) is seen in his role of Commanding Officer of No. 322 Wing RAF, and Wing Commander R “Raz” Berry, who took over leadership of the Wing in January 1943, both conversing at Tingley, Algeria.