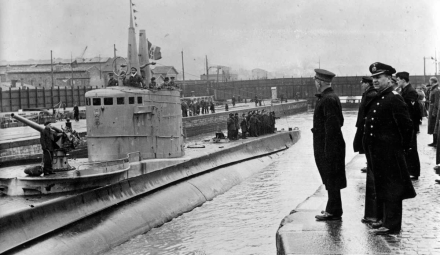 There is good reason why South Africa’s coastline was so heavily defended by the Royal Navy and South African Navy during World War 2, especially protecting shipping rounding the Cape, and none more so than protection from the submarine menace. One such submarine was the RM Leonardo da Vinci, an Italian submarine fighting alongside Nazi Germany as part of the Axis Pact.

The Leonardo da Vinci was one of six Marconi-class submarines built at Monfalcone in 1938 and 1939. The Marconi-class were fairly large boats, 251ft long with 1,510 tons submerged displacement and a crew of 57 men. Armed with four bow and four stern torpedo tubes, one 3.9in deck gun and four 13.2mm machine guns (mainly for anti-aircraft defense) they had a range of nearly 3,000 miles, a top surface speed of just over 17 knots and so were formidable weapons capable of operating far from home.

In February 1943, the submarine began a long mission to hunt in South Africa’s waters – the South Atlantic and the Indian Ocean, it is the final patrol for the Leonardo da Vinci.

This patrol was conducted in collaboration with another Italian submarine, RM Finzi. On March 14th 1943, the da Vinci sunk her most notable target, the troopship SS Empress of Canada. 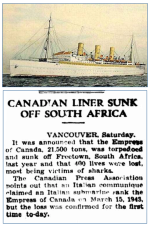 The 21,516-ton RMS Empress of Canada, was a liner of the Canadian Pacific Steam Ship Company, which had been converted to a troop transport. To the German U-boat captains she managed to elude for three and a half years, she was known as “The Phantom”.

She was sailing from Durban, South Africa to the United Kingdom via Takoradi on the Gold Coast, West Africa. On board were 1,346 persons including 499 Italian prisoners of war and Greek and Polish refugees.

Just after midnight the first torpedo struck. The commander of the Leonardo Da Vinci then gave Captain Goold, the commander of the Empress of Canada half an hour to abandon ship.  She sank in about 20 minutes after a second torpedo was launched.

A total of 392 people were lost due to exposure, drowning and sharks, including, 90 women and 44 crew.  In the “fog of war”, the sinking of the Empress of Canada can be ironically seen as a “own goal” as nearly half of the fatalities reported were the Italian Prisoners of War.

The survivors were picked up by the destroyers and corvettes HMS Boreas, HMS Petunia and HMS Crocus and the Ellerman Line vessel Corinthian.

Following this on the 19th March 1943 – The British merchant vessel SS Lulworth Hill – 7,628 tons – was da Vinci’s next victim northwest of South West Africa (now Namibia, but then a South African protectorate). 14 survivors made it onto a life raft. The Leonardo da Vinci captured and took on board one survivor of the sinking, James Leslie Hull. 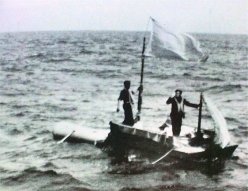 After 29 days the UK authorities assumed that the Lulworth Hill had been lost with all hands and duly informed their families.On 7 May the HMS Rapid picked up the Lulworth Hill’s liferafts. Of the 14 men that had survived the sinking, after 50 days adrift only two, Seaman Shipwright (i.e. carpenter) Kenneth Cooke and Able Seaman Colin Armitage, remained alive.

By mid April 1943, the Leonardo da Vinci had rounded the Cape and was in the Indian Ocean, just off Durban, South Africa and here the tally of destruction was to escalate:

17 April 1943 – The Dutch merchant vessel SS Sembilan – 6,566 tons – is torpedoed and sunk by the Italian submarine Leonardo da Vinci east of Durban.  The attack also totally destroys two American Landing Crafts, LCP-780  and LCP-782 which were being carried aboard as freight.

The next day, 18 April 1943 – The British merchant vessel Manaar – 8,007 tons – the second victim of the Italian submarine Leonardo da Vinci within two days, is sunk east of Port Elizabeth.

21 April 1943 – The American vessel (Liberty Ship) John Drayton – 7,177 tons – is sunk by the da Vinci east of Durban, after being Torpedoed twice and shelled while en route to Cape Town. 4 died when Lifeboat #1 capsized during launching. The men in Lifeboat #4 were rescued on 23 April by the Swedish vessel MV Oscar Gorthon; a raft was picked up on 27 April by HMS Relentless.  The men in Lifeboat #2 picked up by the Greek freighter SS Mount Rhodope a month after the sinking on the 21st May. By that time only 8 of the original 24 men were still alive and of them, a further 3 died in hospital in Durban. In all, 21 of the 41 merchant crew members and 5 of the 15 Naval Armed Guards aboard John Drayton lost their lives.

The last vessel to be sunk by da Vinci was on 25 April 1943, British vessel operated by Shell as a petroleum tanker called the Doryssa – 8,078 tons – is was sunk south of Port Elizabeth.

As a result of all the successes the Commander of the da  Vinci, T.V. Gazzana-Priaroggia was promoted Capitano di Corvetta with immediate effect from 6th May 1943.

With a string of victories and promotions after its very successful patrol to South Africa’s waters, on 22 May 1943 Leonardo da Vinci unwisely signalled its intention to head home for Bordeaux, France.

The decision to radio home its intentions proved fatal.  Its position having been fixed by Allied direction-finding equipment, on 23 May the destroyer HMS Active  and the frigate HMS Ness subjected the submarine to an intense depth charge attack and sank it 300 miles (480 km) west of Vigo (off the West African coastline).  There were no survivors. 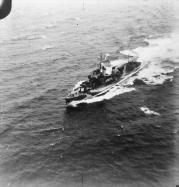 Gianfranco Gazzana-Priaroggia was a massive loss to the Italian war effort and the Italian Navy, he was posthumously awarded the Knight’s Iron Cross from Germany and the Gold Medal for Military Valor by King Vittorio Emanuele III.  Rather unusually given the outcome of the war, as testament of this legacy, two modern Italian Sauro-class submarines are named: