Winning a Victoria Cross for gallantry and surviving the ordeal  has some luck associated to it, and this lucky charm of a VC winner is testament of this. Every Anzac Day we recall the Gallipoli campaign, and we remember the heroes of the campaign –  Australian, New Zealand, British and even in modern times the Turkish heroes too.

One such unassuming hero was the son of a South African merchant, and there is a little mystery as to where he was born, some sources say Durban, Natal Colony and other sources say Dresden, Germany (his parents had visited a Spa there to get a ‘cure’).  In either event Percy Hansen was born into a wealthy and well connected Danish family that had settled in South Africa.  He was born on the 26 October 1890, the son of  Viggo Julius Hansen and Anna Elizabeth (nee Been), Viggo was a merchant running stores in the cities of Port Elizabeth and Johannesburg as well as stores in the Cape Colony generally.

When it came time for his formal education his family moved from South Africa to London around 1901/2.  and Percy initially attended Hazelwood Prep School in Surrey (then a school for 8 to 11 year old boys), then Oxted in Surrey and finally he then went on to Eton College from the 20 September 1904.

He saw a career for himself in the military so when he was about 20 years old his father was naturalised as a British subject (8 December 1910) which enabled  him to join the British Army.  His training took place at The Royal Military College, Sandhurst.

By the 4th March 1911 he was commissioned as a 2nd Lieutenant in the 6th Battalion of the Lincolnshire Regiment.   He rose to the rank of Captain and by the summer of 1915 he was with his Regiment landing on the shores of Gallipoli.  Carrying a lucky charm into battle (see featured image), It would be here that he would earn his Victoria Cross.

The lucky charm is one of Hansen’s personal things on display at The Imperial War Museum.  It comprises two tiny metal figures linked together with small metal rings, the larger of the two figures is unclothed except for a nappy and resembles a curly-haired baby, the smaller of the two figures is clothed and wears a leather hat stitched with vegetable fibre.

After landing at Suvla Bay on the night of 6 August 1915, the next day the Allies pressed forward across the dry Salt Lake beyond the shore and the 6th Lincoln’s captured Yilghin Burnu, christened “Chocolate Hill” by the Allies. On 9 August the British attempted unsuccessfully to break out of the Suvla Plain, by advancing into the high ground which surrounded it, aiming for Anafarta. Fighting raged round Scimitar Hill, parts of which changed hands several times, but by the end of the day the British had failed to secure it. Many men were left wounded on its slopes and when Turkish artillery set alight the scrub which covered it, Captain P H Hansen, now the adjutant of the 6th Lincoln’s, called for volunteers to help rescue them. Six of the wounded were saved and for this gallant act Captain Hansen was awarded the Victoria Cross. Lance-Corporal Breese, who assisted him, received the DCM.

For most conspicuous bravery on 9th August, 1915, at Yilghin Burnu, Gallipoli Peninsula.

After the second capture of the “Green Knoll” his Battalion was forced to retire, leaving some wounded behind, owing to the intense heat from the scrub which had been set on fire.

When the retirement was effected Captain Hansen, with three or four volunteers, on his own initiative, dashed forward several times some 300 to 400 yards over open ground into the scrub under a terrific fire, and succeeded in rescuing from inevitable death by burning no less than six wounded men. 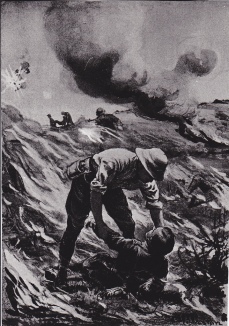 However the bravery of this remarkable man did not stop there, he went on to win the Military Cross for bravery in another engagement just one short montb later.

He won the Military Cross for performing a daring solo reconnaissance mission at Sulva Bay, on the night of 9 September 1915, he carried out the mission along the coast, carrying only a revolver and a blanket for disguise. He successfully located an important Turkish firing position.

His citation for his Military Cross 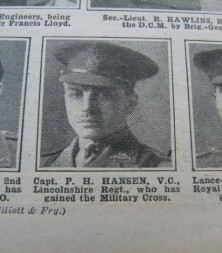 “For conspicuous gallantry at Suvla Bay on 9th September, 1915. He made a reconnaissance of the coast, stripping himself and carrying only a revolver and a blanket for disguise. He swam and scrambled over rocks, which severely cut and bruised him, and obtained some valuable information and located a gun which was causing much damage. The undertaking was hazardous. On one occasion he met a patrol of 12 Turks who did not see him, and later a single Turk whom he lulled. He returned to our lines in a state of great exhaustion”.

By this time he had become the Commanding Officer of battalion when Colonel Phelps went down with dysentery, however Hansen also fell ill about two weeks later and he  evacuated to Egypt (it was here that he learned of his VC award).

And there was still more bravery to come. Due to his ill-health, Hansen was eventually transferred to France and appointed Brigade Major to the 170th (2/1st North Lancashire) Brigade.  He remained a staff officer for the rest of the war, during which he served with the II ANZAC Corps. He was made a Companion of the Distinguished Service Order (DSO) performing yet another  another daring reconnaissance mission during the Battle of Passchendaele in 1917.

“For conspicuous gallantry at Suvla Bay on 9th September, 1915. He made a reconnaissance of the coast, stripping himself and carrying only a revolver and a blanket for disguise. He swam and scrambled over rocks, which severely cut and bruised him, and obtained some valuable information and located a gun which was causing much damage. The undertaking was hazardous. On one occasion he met a patrol of 12 Turks who did not see him, and later a single Turk whom he lulled. He returned to our lines in a state of great exhaustion”.

After World War 1, he attended Staff College in Camberly and he was married on 12 June 1928 at the Register Office, Chelsea Town Hall, London to Marie Rose, daughter of G. Emsell; and he had one daughter.

Pery Hansen VC DSO MC was still in service at the outbreak of World War 2. On the outbreak of war in  September 1939 he was appointed to Acting Assistant Quartermaster General 55th Division and then 12th Corps.  In 1941 he received the rank of Brigadier and on the 24th February 1942-43 he became the Commander of Belfast, Northern Ireland area.

By the 15th May 1943 he was appointed as the Sub District Commander Ashford, Kent and by August 1943 he rose to Head of Civilian Affairs unit for Norway under SHAEF -.Supreme Headquarters Allied Expeditionary Force – the headquarters of the Commander of Allied forces in north west Europe, U.S. General Dwight D. Eisenhower. 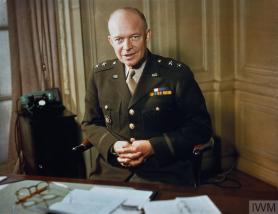 At the end of the Second World War he finally retired from the Army – 19 January 1946, in 1950 he was a member of the Guard of Honour to mark visit of Winston Churchill to Copenhagen, Denmark.

He was awarded the Royal Order of St Olav by Norway. He was also awarded the Legion of Merit by the United States and the citation for his award reads: –

“Brigadier Percy H. Hansen, British Army, in cooperation with the forces of the Army of the United States, distinguished himself by exceptionally meritorious conduct in the performance of outstanding services, as Head of the Civil Affairs Unit, Supreme Headquarters Allied Expeditionary Force Mission to Norway from August 1943 to July 1945. His keen understanding of the problems involved in administering Civil Affairs in a liberated country, and the efficient plans of organisation and operation which he established, enabled the Allies to successfully undertake its mission to Norway. His contribution to the military effort reflects high credit upon himself, and the military service of the United States and their Allies.”

His medal rack is quite something:

He had 5 Mentions in Dispatches in total in his very distinguished military career. Now that is one very Lucky Charm indeed.

Like his birth there is also a little controversy over the place of his death, some sources say Brigadier Percy Howard Hansen VC DSO MC died on the 12th February 1951 in Kensington, London, other sources say he died of pneumonia in Copenhagen. There is reference to his funeral been held in London, however in either event his ashes were eventually interred in family vault, Garnisons Kirkegard, Copenhagen. Section R. Row K. Grave 3.

Sherwood Kelly VC “…. a Herculean of Irish-South African origin with a quite remarkable disregard for danger”.

Extract published with the kind permission of The VC and the GC, The Complete History, published by Methuen and The VC and GC Association in 2013. Wikipedia and the Image copyright of his lucky charm belongs to the Imperial War Museum.