Iconic image (now colourised) of Commonwealth forces in North Africa during World War 2. Easily identified by their distinctive headgear, South African and Australian soldiers enjoy a game of cards in a gun pit. The South Africans where know as ‘Springboks’ and the Australians known as ‘Diggers’ – a nickname they both inherited during World War One.

The distinctive headgear as shown is quite interesting, so too the unique military bond and history of that exists between South Africa and the Anzac alliance, Australia and New Zealand. 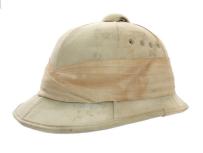 South African.  The South Army (and Air Force) was issued with a “Polo” style “Pith” helmet.  Made from cork it was not intended to protect the head from flying bullets and shrapnel, that was the purpose of the British Mk 2 Brodie helmet (also issued to South Africans). The pith helmet was worn mainly as sun protection when not in combat.

Australia.  The Australian army wore the “slouch hat”, also intended for sun protection when not in combat, like the South Africans they where issued with the British “Brodie” Mk2 steel helmet when in combat.

The “slouch” hat also has a little South African history to it.  The word ‘slouch’ refers to the sloping brim. The brim is made from rabbit-fur felt or wool felt and is always worn with a puggaree.

The Victorian hat was an ordinary bush felt hat turned up on the right side. The intention of turning up the right side of the hat was to ensure it would not be caught during the drill movement of “shoulder arms” from “order arms”. 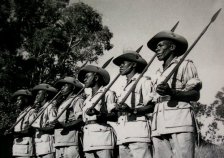 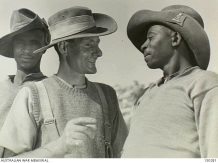 In an iconic Australian War Memorial photograph to demonstrate this unique association,  a Australian soldier working on the Beirut-Tripoli railway link is seen here chatting with two members of a South African Pioneer Unit (SA Native Military Corps) also working on the railway. The photo is designed to show off their similarities of dress and bearing and promote mutual purpose.

Of interest – The Gun in the pit

Interestingly the gun in the pit is not South African standard issue.  Instead it is a British made Hotchkiss Portative MK 1, which was used by the Australians, dating back to World War 1, so it is probably their gun pit.  Of French design the MK I was a .303 caliber machine gun, used in ‘cavalry/infantry’ configuration, with removable steel buttstock and a light tripod. This gun is normally fed from either flexible “belts” or strips like you see in the featured image. Normal Hotchkiss Portative strips hold 30 rounds each.

Because of mutual historic, military, language, British Dominion and cultural ties here was certainly was plenty of camaraderie between the South Africans and the Anzac Australians and New Zealanders during the war. Lots of informal rugby and cricket matches were played at any good opportunity, games of cards (seen here), exchanging of “souvenirs” (especially badges, sun helmets and slouch hats), occasional punch ups in Cairo pubs fuelled by beer which were soon forgotten and forgiven.  Generally good old good old fashioned soldierly fun and “band of brothers” stuff.

Because the South Africans were responsible for the “fall of Tobruk” in World War 2, a city the Australians fought to hold with such tenacity before handing it over to the South Africans to defend, as a South African you might also come into some light-hearted but pointed “sledging” from an Australian military veteran, even to this day.

Modern South Africa does not extensively praise, idolise and remember her statutory armed forces and the origins of their fighting legacy anything near the Australians and New Zealanders do to their forces now.   This has manifested with the inclusion of hundreds of South African veterans residing in Australia in National Anzac Day parades held around Australia and New Zealand, and it is because of this unique bond forged by our forefathers in WW1 and WW2 that they are welcomed with open arms.

Researched and written by Peter Dickens, with deep gratitude for the colorised photo of the Diggers and Springboks by Photos Redux – Imperial War Museum copyright.

Tobruk; “Defeat is one thing; Disgrace is another!” South Africa’s biggest capitulation of arms – Tobruk

Diggers and Springboks WW1; Springboks and Diggers … part of the Anzac ‘mateship’ legacy