Bush War in Angola – this is an example of a MPLA propaganda poster which was retrieved by the SADF (by the hundred) from SWAPO bases in Angola in the aftermath of Ops Protea in 1981.

It calls for the Liberation of ALL of Africa, saying NO to Apartheid, Colonisation and Neo-Colonisation.  These posters were gathered primarily by SADF Intelligence personnel investigating the over-run SWAPO bases.

The MPLA i.e. The People’s Movement for the Liberation of Angola, ruled Angola since the country’s independence from Portugal in 1975 on the simple premise that it “held” Luanda, the capital city, after the Portuguese left it.  This put it in immediate conflict with fellow anti-colonial movements in other parts of the country which disputed the MPLA’s claim, primarily the National Union for the Total Independence of Angola (UNITA).  It however supported SWAPO, the South West Africa People’s Organisation and allowed its military arm (PLAN) to operate armed insurgencies (terror attacks in reality)  into South West Africa (Namibia) from territories it controlled.  The armed wing of the MPLA was FAPLA, the People’s Armed Forces of Liberation of Angola.

Allowing SWAPO bases to operate brought the SADF into conflict with the MPLA and FAPLA.  Operation Protea was launched by The South African Defence Force on 23 August 1981. Its objectives were to destroy the SWAPO command and training centres at Xangongo and its logistic bases at Xangongo and Ongiva.

The Operation was a planned strike into Angola and regarded as a SADF success. Notably for not only capturing loads of intelligence, like these posters, but also all the captured Soviet equipment which South African units in Battle Group 10 (61 Mech) brought back to their bases in South West Africa (Nambia), somewhere around 3,500 tonnes of it. 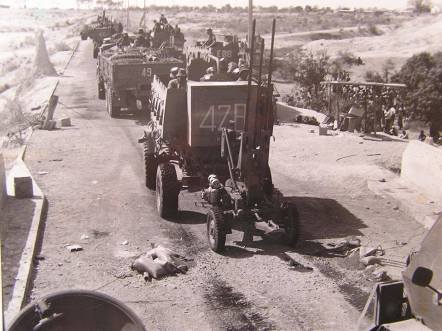 In the aftermath, the SWAPO bases were destroyed, Soviet casualties stood at thirteen: nine officers and four civilians, while one soldier was captured. South African casualties included 10 dead and 64 wounded. PLAN and FAPLA casualties were high with 831 dead and 25 captured.

Such is the course of history and changing times, that the MPLA are still the party in charge of Angola and most of this military hardware is still in South Africa, some in museums but also at military depots and displayed at army bases.

The MPLA has sofened somewhat now from the fire-brand anti-colonisation messages and propaganda slogans of the 70’s and 80’s, it is regarded as “centre-left” politically now and uses the slogan “Peace, Work and Liberty”.

My Tweets
Join 3,457 other followers