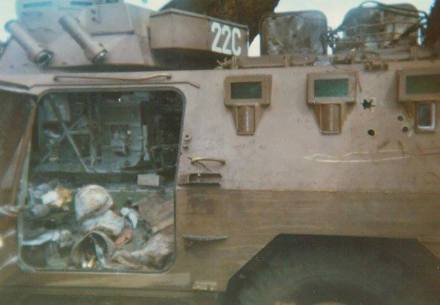 The term ‘Fog of War’ is defined as ‘uncertainty in situational awareness experienced by participants in a military operation’.  It can manifest itself at the time or even many years after the action has taken place.  This deeply tragic account of the loss of a SADF Ratel Infantry Fighting Vehicle, containing two members of the same family’ illustrates this ‘fog’.

14 Feb 1988: Four Members from B Company, 1 SAI including two Cousins who acted as the MAG Machine Gunner team, were Killed in Action in South Eastern Angola during a contact with elements of the 59th FAPLA Brigade during Operation Hooper. The B Company, 1 SAI troops had not klaared out (demobilised) prior to deployment for Ops Hooper so they became 61 Mech Battalion Bravo Company Element. These troops swopped over with B Company 4 SAI and were operating as part of 4 SAI during this attack as part of 61 Mechanised Battalion.

Their Ratel (Honeybadger) Infantry Fighting Vehicle (IFV), Callsign 22C was hit on the left hand side and knocked out by a ZU-23-2 Soviet 23mm Anti-aircraft gun deployed in the ground role. On the right hand side where the Groenewald Cousins had been sitting, a large hole was ripped out of the vehicle. It appeared that the Ratel had also been struck at some point by a South African 105mm discarding sabot anti-tank round, thought to be fired from an SADF Olifant tank.

The 105mm discarding sabot round’s entry can be seen on the top below the second rifle port with the distinctive “star” penetration.

The ‘blue on blue’ debate

There is much debate which surrounds this image and the ballistics in the veteran community, some thoughts are that the 105mm discarding Sabot round made the big hole on top left (the fins made the star pattern) and the three discarding pieces from the Sabot could have made the other three holes to the below right. Others maintain the additional holes came from the enemy 23mm AA gun. Whilst others have proposed that it was all enemy fire and possibly the distinctive ‘fin’ penetration came from a Soviet 100mm T55 6 wing sabot based on the ballistics. 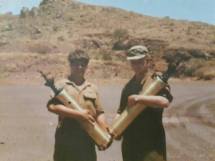 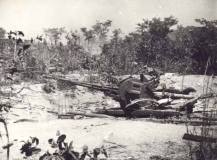 At the time the SADF published this as enemy fire and did not make reference to a  “blue on blue” incident – a blue on blue is a term used for ‘friendly fire’ when forces mistakenly shoot, target or bomb their own forces (this may possibly have been in the interests of moral of both Olifant tank and Ratel IFV crews) and reported it as enemy 23mm fire only. Accounts from the 22C Ratel driver and members on site after the incident point to a SADF “blue on blue” from a SADF Olifant (Elephant) Tank involved in the formation attack on enemy armour and positions, a ‘V” formation in which Ratel 22C took part.

Such is the “Fog of War” and incidents like this leave a very big lump in veterans throats. In any event, whether enemy fire, friendly fire – or both, the brave men who fell in this  Ratel are honoured on the roll:

May they rest in peace and never be forgotten.

Researched by Peter Dickens with references from a number of Border war forums and Graham Du Toit.