In all the United States lay claim to eleven (11) American pilots who took part in Battle of Britain, but one of them is a pilot who was not born or educated in America at all, he was born in South Africa and he took up British citizenship after he was educated in England.  The link, both his parents were American – so by default he’s an American too. Not to detract at all from the praise of any of these pilots by splitting hairs over birthright and citizenships, all of them deserve our highest acclamations regardless, so let’s look at another South African born military hero.

Flight Lieutenant Carl Raymond (Ray) Davis DFC (30 July 1911 – 6 September 1940) was a South African born flying ace of The Battle of Britain, having claimed nine enemy aircraft (and one shared) destroyed, four (and one shared) probably destroyed, and four damaged, before he was himself shot down and killed in action.

Ray was born in Krugerdorp, South Africa to American parents, he was educated in England at Sherborne School and read a Bachelor of Arts at Trinity College Cambridge.  He continued his studies at McGill University in Canada qualifying as a mining engineer.

When he turned 21 in 1932, he applied for and became a British citizen.  From a very well to do family background he met and married Anne Hope, Anne was the sister of Sir Archibald Hope. The marriage was celebrated in the local media such was the profile of the families.

Ray learned to fly whilst visiting his sister in New Jersey and returned to the United Kingdom in 1935.  Living in London he joined 601 squadron, to serve along with his now brother in law, Sir Archibald Hope. He was commissioned in 601 Squadron in August 1936.

The Royal Air Force’s 601 Squadron was something apart from other RAF Squadrons, it was known as the ‘Millionaires Squadron’ and some notable pilots flew in it, Roger Bushell, another South African who became ‘Big X’ in The Great Escape (see earlier Observation Post article on him The Great Escape … led by a South African!), Billy Fiske another American who was a Bobsleigh champion and Max Aitken, the future Chairman of the Express Newspaper Group.

601 Squadron was formed when a group of wealthy aristocratic young men, all of whom were amateur aviators, decided to form themselves into a Reserve Squadron of the RAF after a meeting in White’s Club, London. The original officers were picked by the first commanding officer, Lord Edward Grosvenor, youngest son of Hugh Grosvenor, the 1st Duke of Westminter.  Grosvenor tested potential recruits by plying them with alcohol to see if they would behave inappropriately as gentlemen when drunk. They were required to consume a large amount of port. Gin and tonics would follow back at the club.

Grosvenor wanted officers of sufficient presence not to be overawed by him and of sufficient means not to be excluded from his favourite pastimes, eating, drinking and White’s (Gentlemen’s club). 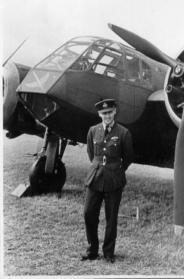 The nickname “the millionaires squadron”, was gained because of the Squadron’s reputation for filling their ranks with the very ‘well-heeled’, and not just aristocrats but also sportsmen, adventurers and self-made men.

There would be no time for petty rules or regulations. But Grosvenor was nonetheless intent on creating an elite fighting unit, as good as any in the RAF and the pilots took their flying and fighting very seriously. Had it not been their reputation as very good, effective and efficient fighting unit, they would never have got away with all the flamboyant antics they got up to (some wealthy enough to buy cameras, the pilots even took to filming their escapades).

Most of these affluent young pilots had little regard for the rigid discipline of the regular service; they lined their uniform tunics with bright red silk, wore red socks and wore blue ties rather than the regulation black. They played polo on brand-new Brough Superior motor cycles, drove fast sports cars and most of the pilots owned their own private aircraft.

When war broke out Ray Davis was called to full-time service on 27 August 1939. On 27 November 1939, he flew one of the six 601 Squadron initial Blenheims (they were later equipped with Hurricanes), which attacked the German seaplane base at Borkum. 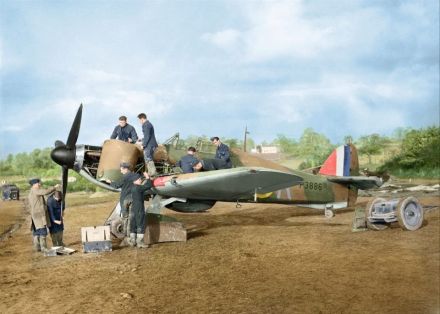 The feature image above shows “Hurricane Mk I UF-K of No 601 Squadron RAF while it is been serviced on the perimeter dispersal at RAF Exeter in mid-September 1940. This aircraft saw success with both Sgt Leonard N Guy and F/O Carl Raymond Davis.

He awarded the Distinguished Flying Cross later that month on the 30th August 1940.  His citation reads:

“Flying Officer Davis has been engaged on operational service since 3rd September 1939.  He has taken part in nearly all patrols and interceptions carried out by his squadron.  He has been a section leader for the last two months, and on several occasions led his flight. F/O Davis has personally destroyed six enemy aircraft, and severely damaged several others. He has shown great keenness and courage”.

Ray went on to down five more German aircraft before his last fateful mission.

About 9am in the morning 50 German Messerschmitt 109’s were spotted at 20 000 feet, no enemy bombers were in the area.  The weather was very good and the 601 Squadron RAF fighters climbed to attack, a series of dog fights followed.   Ray was shot down by one of the Me109’s, he was killed instantly by two bullets to the head, his Hurricane crashed while inverted, with this his aircraft burned out in the back garden of Canterbury Cottage at Matfield near Tunbridge Wells. He was 29 years old.

He is buried near his family home in Storrington, West Sussex at St.Mary’s Church.

A brave man, a son of South Africa and one of Churchill’s ‘few’ who laid down his life for freedoms we enjoy today.  Lest we forget. 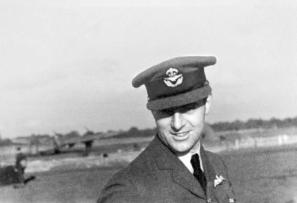