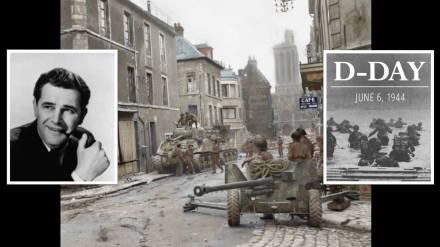 Now, not too many South Africans will know that they can count one of their movie star exports as a D-day hero as well.  This one is a special one, a highly successful actor who would land up disabled in the combat fighting in what was Operation Overlord (D-Day), losing an arm he would come back and re-ignite his acting career – becoming very famous in landmark Movies and Television (which unfortunately South Africa did not have until 1976).

A one-armed South African war hero movie/television star, Donald Grey was in his lifetime very well-known internationally but less so in his county of birth, he was born Eldred Tidbury to a humble beginning in South Africa and later changed his name.

Eldred Tidbury (Donald Gray) was born on 3rd March 1914 on an ostrich farm at Tidbury’s Toll near Fort Beaufort, in the Eastern Cape, South Africa.  A simple kid on a well to do African farm, but it was a talent contest would lead his life and career to some very extraordinary places with life changing twists and turns.

In 1933, Paramount Pictures to rejuvenate and diversify its contract players, launched a competition known as the “Search for Beauty”; heats took place in nations across the English-speaking world. Elred Tidbury entered in his native South Africa and was selected with Lucille du Toit, a dental nurse from Pretoria as one of the winners.

In total, there were 30 finalists worldwide who were screen-tested and of the 30, contracts were awarded to only 10, Tidbury was selected as the overall male winner with a bonus of USD 1,000 with which he bought a car. The overall female winner was Scottish actress Gwenllian Gill who later followed Tidbury to the United Kingdom and became engaged to him; however, their engagement was broken off during the Second World War.

By late 1935, Tibury wanted out of his ‘locked-in’ contract with Paramount Pictures in America and moved Britain and in 1936 changed his name to Donald Gray. He became an engineering salesman selling a boiler preparation, acted in repertory theatre and appeared in several films  In 1936, he took leading role in ‘Strange Experiment’ and by the outbreak of WW2 in 1938, he was the young lead in famous Korda film ‘The Four Feathers’.

When war broke out in 1939, our movie hero decided to join the Army and volunteer, but he was initially turned down for military service due to a duodenal ulcer.  Still determined to join up Donald Gray later managed to enlist in the Gordon Highlanders who had their barracks in Aberdeen, and succeeded in becoming what he called an “ordinary Jock” (having claimed some sort of Scottish ancestry).

In 1941, he was commissioned as an officer in the King‘s Own Scottish Borderers (KOSB), eventually becoming the battalion’s education officer. Donald Gray (Elred Tidbury) was even given brief leave to appear with Dame Vera Lynn as “Bruce MacIntosh” in the famous film ‘We’ll Meet Again’ (1943).  Not to miss the ‘Big show’ that was D-Day, Donald Gray was back with his Battalion by July 1944 and ready to go to France.

He was with the Kings Own Scottish Borderers when they entered the strategic city of Caen and here he was severely wounded during the intense street to street, house to house fighting that was Caen in July 1944. His left arm was shattered by an anti-tank shell, the limb having to be amputated a few days later at an emergency hospital near the front line.

Here is his unit in action in Caen during July 1944, we see troops of 1 Kings Own Scottish Borderers (KOSB), 9th Brigade, 3rd Infantry Division, firing a captured Hotchkiss machine gun during street fighting in Caen, 10 July 1944. 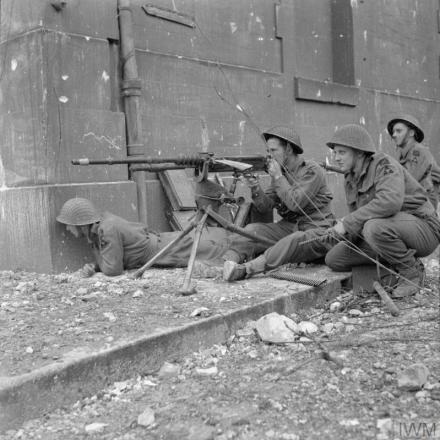 To give an idea of the fighting which led to the loss of Donald Gray’s arm and casualty evacuation here is an extract from 1st Battalion King’s Own Scottish Borderers war diary, for the 9th July 1944;

“The attack on Caen. The plan. The Canadians were to attack from the West. The RUR’s in the centre from the North and 1 KOSB from the East. The Bn moved off at about 0930 hrs over ring contour “60”, which was under shell fire, to FUP on the Eastern outskirts of CAEN. The ghostlike houses slowly came to life as civilians began to realize we were entering the town. They came running out with glasses and bottles of wine. As the Bn was forming up on the start line and trying to re-establish wireless contact with companies and Bde, four Boche were seen to withdraw towards the centre of the town. Soon afterwards out [our] HQ was mortared leaving 1 killed and 1 wounded. The Bn then proceeded to clear the town. Little opposition was met.

Progress was slowed down by snipers and an occasional MG. Much assistance and information was offered by eager civilians. Debris and cratered streets also made progress extremely difficult. We eventually reached the RV in the Old Town and established contact with the RUR and pushed forward patrols to the river. Patrols met quite heavy fire from across the river and a number of casualties were sustained.” 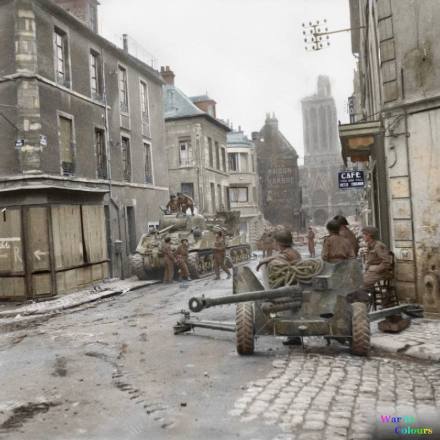 Here a colourised image witnesses the fighting of his unit in Caen as seen by Donald Gray and brings the fighting to vivid life. Here is a 6-pounder anti-tank gun of the 1st Battalion, King’s Own Scottish Borderers, part of the 9th Brigade of the British 3rd Division, along with two Sherman tanks in Rue Montoir Poissonnerie near St-Pierre Church, Caen. 10 July 1944.

After the war, a disability like only having one arm did not stop Donald, he chose to continue his career in film and stage acting and against the odds became even more successful at it. Donald toured South Africa with his own repertory company, appeared in other films, and was contracted by the BBC’s  radio repertory company.

He left South Africa again to appear in Saturday Island (1952) and then returned to the BBC as an announcer.  Then came his very big break. Donald Gray then starred as the one-armed detective Mark Saber in the British TV series of the same name which ran for 156 episodes from 1955 to 1961. It was originally titled Mark Saber, or The Vise in the United States, but was later known as Saber of London and Detective’s Diary. In 1957, The Vise was renamed, redeveloped, and transferred from ABC to NBC  under the new title Saber of London.

He later returned to South Africa, where he passed away in 7th April 1978.  A truly extraordinary son of South Africa, we unfortunately just missed his whole rise to stardom on Television, because unlike in the USA and Britain, the government in South Africa in the 50’s, 60’s and right up to the mid 70s figured it was the ‘devils box’ and banned it (see and click link The ‘Devil’s Box’)

The bottom line most South Africans now have no idea who Donald Gray was and nor do they know why we should proud of this very remarkable D-Day hero – luckily for all of us media has moved on and his story can now be easily shared.