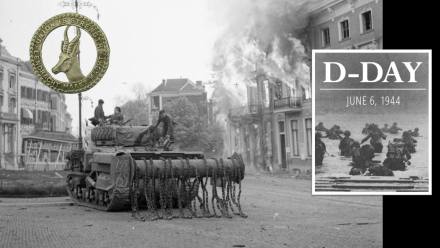 The mine-flail became a critical anti-land mine device during D-Day (Operation Overlord), it helped open the way for troops and armoured vehicles over the extensive minefields laid by Hitler’s forces to form ‘the western wall’ and prevent invasion.  But did you know the mine flail was invented by a South African?

Inventing the Mine Flail

Technically a mine-flail is a vehicle-mounted device that makes a safe path through a mine-field by deliberately detonating land-mines in front of the vehicle that carries it.  It was usually mounted in front of a tank hull to offer the operators the armoured protection they needed, use of its weaponry and the tracked system to deal with terrain.

The mine flail consists of a number of heavy chains ending in fist-sized steel balls (flails) that are attached to a horizontal, rapidly rotating rotor mounted on two arms in front of the vehicle. The rotor’s rotation makes the flails spin wildly and violently pound the ground. The force of a flail strike above a buried mine mimics the weight of a person or vehicle and causes the mine to detonate, but in a safe manner that does little damage to the flails or the vehicle.

The idea is commonly attributed to a South African soldier – Captain Abraham du Toit. A test rig was constructed in South Africa and results were so encouraging that du Toit was promoted and sent to England to develop the idea.

Before Capt. du Toit left for England, he described his idea to Captain Norman Berry, a mechanical engineer who had been sent to South Africa in 1941 to evaluate the system.

Captain Berry later served in the British Eight Army during the North African Campaign. He had become an enthusiast for the mine flail idea; he lobbied senior officers to commission the development of a flail and carried out his own experiments with mine flails in the spring of 1942 to deal with the extensive minefields laid by Rommel’s forces in the desert campaign. 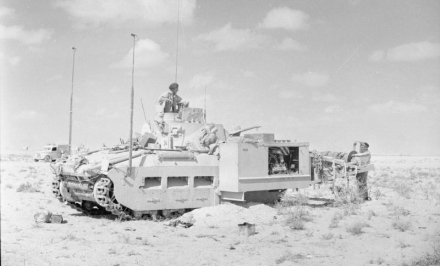 Later Major L. A. Girling was given the task of developing a similar device after it had been independently re-invented by another South African officer. When Berry heard of this, he handed over his work to Girling (who had no idea he was duplicating Captain du Toit’s current work in England, as that was still highly secret).

Meanwhile, back in Britain, Captain du Toit (as unaware of developments in North Africa as they were of his), working with AEC Limited developed the Matilda Baron mine flail, using a Matilda tank and a frail for demonstrations and training.

Captain du Toit’s work fell under a program known as ‘Hobart’s Funnies’, which were a variety of unusually modified tanks operated during the by the 79th Armoured Division  of the British Army or by specialists from the Royal Engineers.

A Sherman Crab flail tank coming ashore from an LCT during the invasion of Walcheren Island, 1 November 1944.

They were designed to overcome the problems that more standard tanks experienced during the amphibious landings and focussed on the problems of the Normandy D-Day landings. These tanks played a major part on the British and Commonwealth beaches during the landings. They were forerunners of the modern combat engineering vehicle and were named after their commander,  Major General Percy Hobart.

A number of experimental flail tanks were produced, including the Valentine Tank, the M4 Sherman – the Sherman Mark IV and Mark V Scorpions and the “Sherman Lobster”. Eventually one of these, the Sherman Crab, went into full production and saw active service.

Captain du Toit himself had become a strong advocate of a concept called the parambulator mine flail – a self-contained device with its own engine, that could be pushed ahead of any tank that was available. However, the consensus of opinion favoured special-purpose tanks with a permanently mounted flail system and he returned to South Africa in 1943.

After the war ended, so vital was this contribution to the Allied victory and the war effort, that in 1948, Capt. Abraham du Toit would receive an award of £13,000 from the Royal Commission on Awards to Inventors for his work on the mine flail (a sizeable award in its day). Nine others (including four South Africans) would share a further £7,000.

And there you have it in truth – South Africa led the way on this most critical device for D-Day, and an old adage stands – faced with a problem like a mine-field – a South African makes a plan!

South Africans continued to ‘make a plan’ in developing and leading anti-mine vehicles which continued well into the Angolan Border War.