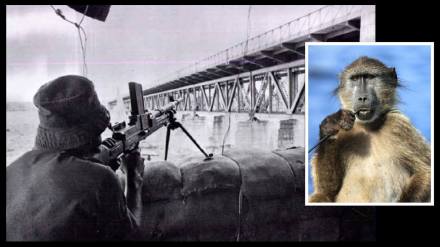 The day we declared war on Zimbabwe

According to a report in the Sunday Independent, a troop of 200 baboons is conducting a reign of terror on Beit Bridge. They live on the catwalk below. From there they stage ambushes on cars and travellers, eating and thieving and taking their loot back to the catwalk.

I find this gut-wrenchingly hilarious. It’s amazing how history turns full circle. The last group of baboons terrorizing the catwalk on Beit Bridge was our army platoon. It may only be a footnote in the history of old South Africa, but it was us – little ol’ us – who unintentionally declared war on Zimbabwe in the early 80’s.

Beit Bridge was a sensitive posting. ‘Daaie fokkin communis en terroris’ Robert Mugabe had come to power only a few months before. At the last outpost on the frontier, standing face to face with the enemy half-way across the bridge, our platoon was instructed to defend South Africa against the swart gevaar.

Our company commander, an Infantry captain, took this mission as a personal honour bestowed by PW Botha, Constant Viljoen (Chief of the Defence Force), Jannie Geldenhuys (Chief of the Army) and God, in that order.

On the sandy, blisteringly hot parade ground of Beit Bridge he stood us at ease, not stand easy, for two hours in the sun. We were lambasted about the massive responsibility of our task. We were not under any circumstances to communicate with the Zimbabwean soldiers.

We were to be perfectly turned out, representing the whole SA army in appearance and discipline. We were the gate-keepers between SA and Communist Africa. The smallest indiscretion could flare into an international incident. “En julle fokkin Engelsmanne,” he said, referring to the minority five of us in Platoon 1, “Ek watch julle – Pasop!”

Thus entrusted with the safe-keeping of all SA, we were dispatched to the very same catwalk under the Bridge inherited today by our successors, 200 large monkeys.

And thus the Alfred Beit Bridge (1952) over the Limpopo River was once our possession, our kingdom. Amazing how the Lord giveth and the Lord taketh away.

Actually, the bridge is a beautiful place on the Limpopo, especially at sunset. Strong legs brace into the flowing waters, and in the early 80‘s all manner of wildlife would come down to drink, including hippos. A resident crocodile patrolled the waters below, and we had endless hours of reflection from our bunker, now hidden behind overgrown foliage at the red circle (see picture below).

Now our Captain may have been a drunken, Soutie-hating messiah but he knew his men. Leave low-ranking troops idle for too long and something untoward will happen. Leave five Souties in a bunker with a machine gun on an international border and you’re asking for a career-ending incident.

So we never told him that we’d smuggled cases of Castle Lager into the bunker. Nor that we’d chatted to the cautious Zim soldiers on the catwalk. He also never found out that we’d snatched a camouflage cap off one’s head. And that both sides had cocked rifles, resulting in a tense stand-off, before we threw the cap back to them. Such small indiscretions were relatively easy to hide.

But when one drunken Soutie, feet up on the sandbagged wall, cocked the machine gun in a routine way to check the supposedly empty chamber, then pulled the trigger, we didn’t expect a clip of twenty odd rounds to fire across the water at the Zimbabwean bunker.

Consternation and chaos broke out in the bunker. We all hit the floor, beer bottles scattering.

A hundred men stumbled out the bar and fell into trenches, and stayed there all night as the odd bullet continued to crack across our heads. In the morning the border post was closed, reinforcements sent and the Captain summoned to Messina HQ, some 20 km away.

Weeks later we were at that landmark Oasis of the North, the Messina Hotel, getting pissed after a rugby game. The Captain, dronk verdriet, was there too, staring into his Brannewyn. It was safe to ask what happened when he got called to Messina HQ that day.

He sukkeled to stay upright on the barstool as he revealed the biggest uitkak in the history of the SADF.

A Colonel had grilled him, asking – “who fired first”?
“They started it,” he said.
The Colonel then reported to Jannie Geldenhuys, Chief of the Army.
He in turn told Constant Viljoen, Head of the Defence Force.
Who spoke to Pik Botha, Minister of Foreign Affairs.
Who called in the Zimbabwean Ambassador…
Who said “the SA Army started it”.
(Here our Captain paused, and downed his Brannewyn)
…Pik stared at him, not knowing what to believe.
But had to inform PW Botha, who crapped him out.
PW also kakked out General Viljoen.
Who shat out Jannie Geldenhuys.
Who got bedonnered with the Colonel.
Who went bevok at the Captain…
… who got five lying Soutpiele on orders in front of him, and in an unparalleled fit of drunken rage, demanded the truth.

There was only one truth, and we stuck to it. “They started it”.

In matters of unresolved blame, the army falls back on an old tactic – the opvok. Sandbags were dished out, a killer sergeant instructed to break us physically and mentally, and down to the fence by the river we were sent.

It was the most brutal of PT sessions. We were drilled all day firstly into cramp, then heat stroke and finally semi-consciousness. The fences are still there today but Zimbabweans cutting holes in them care little about us Souties who nearly died there thirty years ago.

Ah well, it’s all water under the bridge now, so to speak. Beit Bridge now has a new set of problems with millions of refugees, cholera, traffic congestion and a shortage of toilet paper.

I’m glad all this nonsense is not happening on my beat. It seems appropriate that baboons are the new custodians of the bridge – their intellectual capacity suits the chaos there, and at least they won’t accidentally declare war on Zimbabwe.

Still, I get nostalgic for the bridge we once defended, and which God made our kingdom for two short months. It was beautiful and calm there when the Captain had passed out. I sometimes wish I could return to that bunker at sunset, if only for a beer and a banana with the new guard.

Editor’s Note; Sometimes we get a gem of a story, and this one from the heart of a veteran SADF national serviceman who has “been there, done that and got the T shirt” fighting on the Angola/Namibia (SWA) Border (and the Border on Zimbabwe), thank you Steve for this bit of “truth” and sharing your story in such an amusing and interesting way with The Observation Post.  Copyright  – Steve De Witt.

Other Stories by Steve de Witt

4 thoughts on “They started it!”