Many readers of The Observation Post have asked for the follow-up story by Steve De Witt of their humorous encounter with the Soviet made T34 tank in their SADF made ‘Buffel’ APC and what happened to Christo their Buffel driver?

Christo our driver – he who successfully retreated from a Russian T-34 tank – was the most reluctant soldier in the Border War. The army didn’t want him to fight as he couldn’t handle pressure, and he didn’t want to fight anyway. Why? – because Jesus said turn the other cheek.

Once we stole his Old Brown Sherry and quickly owned up. Then tried to make him open us another bottle, on religious principle. Instead he cocked his rifle and gave us some Old Testament vengeance.

The bunker after sunset was our preferred drinking hole. Here we’d open the first bottle next to the machine gun. And open the last in darkness long after the generator had killed the power.

Sherry had the effect of converting Christo to other faiths. After one bottle he suddenly believed in Buddhism, and told you so. After a second bottle he became an Atheist, and told the Dominee. Most times he couldn’t find where the Dominee was hiding.

As punishment for this wavering religiosity, fate led Christo towards that Russian tank. Later he drove our troop carrier over a landmine. Christo the pacifist survived both encounters but he’d had enough.

Back at Base, he drank himself through Atheism into a new phase, Bravery. This helped him steal ratpacks from the store, pack them in his Buffel and attempt to drive home from the Border.

He hit another landmine.

For these colourful adventures and many more, our mate Christo was much liked. When he transgressed, Christo’s older brother gave our Captain bottles of brandy to drop the disciplinary charges. So the rank looked forward to Christo’s antics.

Yes, Christo’s GrootBoet had a Milky Way of pips on his shoulders. He was so important he only moved by Helicopter. Christo said he even flew to the GoCarts on the other side of his Base. And he would swoop in regularly to haul KleinBoet out of our Kas, and then fly back to wherever again. Wherever was very far away. I know that because, where we were, I never saw GrootBoet Brigadier fighting the enemy.

I suppose that’s not unusual because Brigadiers aren’t allowed in combat. Even the enemy went to primary school. Brigadiers worry wearing so many gold stars.

Anyway, it wasn’t GrootBoet Brigadier’s job to get Kills on the Operations Board. That was our task. Problem is, we weren’t getting enough kills, as he often told us.

It wasn’t through lack of trying. These were SWAPO guerrillas we were hunting in Owamboland, real insurgency specialists. We wanted to fight them. They wanted to hide.

Mao Tse-Tung taught them that. Sleep during the day somewhere in the thick bush. It’s such a big country they’ll never find you. Then at night let the army sleep in the bush – while you drink beer and talk freedom in the kraals.

They won a country like that, those freedom fighters.

Not that we lost – don’t dare suggest that! We just had nothing more to fight for. In ’89 the Berlin Wall came down and the Communists suddenly wanted Democracy. It was such a shock that PW Botha had a stroke. And gave them one man one vote, just like that.

Or maybe he had his stroke later – after realising he’d given away the country we fought and died for. I forget which came first.

Anyhow, back to the Border War. None of us could have predicted it’s outcome. In the days of GrootBoet Brigadier, we were too busy looking for sleeping guerrillas to worry about winning or losing.

Winning was everything, for sure, but that was the Brigadiers’ problem. They saw the big picture and designed strategies for our victory. They had massive responsibility considering all the planning, logistics and execution involved.

Then they still had to criss-cross Owamboland by Chopper to wherever their brothers were in DB, or hunt ivory.

One time GrootBoet Brigadier flew in, unlocked the DB and stayed the night with us, drinking with the officers. But he had to leave early the next morning, he said. 32Bn was on Ops in Cuvelai and he needed to organise fuel columns.

I guess Zambia was far away which meant much more aviation fuel. During heavy fighting up north the elephants always fled there.

Before leaving the next morning he inspected us on Parade which was nerve-wracking for all, especially the Sergeant Major. 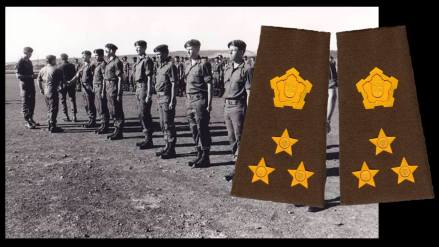 Not for Christo. GrootBoet Brigadier spent a long time looking through KleinBoet’s barrel for that elusive speck of dust. Eventually Christo smirked and offered him some advice.

“You’ll see the sun come up through that barrel, Brigadier”

The Sergeant Major exploded and threw him back into DB for insubordination “and you stay there until you klaar out, Troep!”

GrootBoet Brigadier sighed and climbed into his helicopter. My faith in military discipline was restored. You can’t just chirp a Brigadier like that on the parade ground.

After supper the Captain ordered a bottle of brandy delivered to the Sergeant Major’s tent. He was so happy he reached into his kas for a short glass and downed two doubles, straight.

I always respected our Sergeant Major. You could rely on him to uphold military discipline regardless of a man’s rank or family connection. In the army you can’t let the Christo’s get away with murder.
Hell he could drink, that Sergeant Major. And get angry too, especially after downing doubles. I remember how shocked the MP Sergeant was when confronted in the bar. He stood rigidly to attention as the Sergeant Major shouted obscenities into his face.“Who the (NuweVloekerei) do you think you are, locking up the Brigadier’s brother!”

Editor – Sometimes we get another gem of a story, and this one from the heart of a veteran SADF national serviceman who has “been there, done that and got the T shirt” fighting on the Angola/Namibia (SWA) Border, thank you Steve for this bit of “truth” and sharing your story and photos in such an amusing and interesting way with The Observation Post. Copyright  – Steve De Witt, with many thanks to Dave Bosman and Steve’s brothers in arms for the use of thier images.

Other Stories by Steve De Witt

One thought on “Ballasbak with the Stars!”