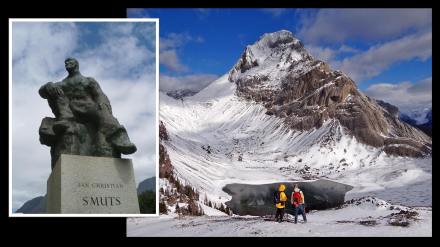 We know that Jan Smuts around the world has a Kibbutz named after him in Israel, but did you know he also a Mountain named after him?  This ‘mountain’ of a South African, with his love for Botany, Nature and Mountain hiking in addition to his credentials as Statesman, Philosopher, Reformer, Lawyer, Botanist and Warrior  – also has his own Mountain – and its located in the Canadian Rockies.

It is for good reason that Smuts has a mountain in his name, he once said of his love for mountains when unveiling the Mountain Club War Memorial at Maclear’s Beacon on the summit of Table Mountain in 1923;

“The Mountain is not merely something eternally sublime. It has a great historical and spiritual meaning for us … From it came the Law, from it came the Gospel in the Sermon on the Mount. We may truly say that the highest religion is the Religion of the Mountain”

A number of peaks in the Canadian Rockies in the vicinity of Kananaskis Lakes in Canada carry the names of Admirals, Generals and others directly related to the military during the two World Wars.

Mount Smuts is also not for the weak hearted, the mere mention of this peak is enough to make a serious mountain scrambler weak in the knees. This peak is debatably the most difficult scramble in the Canadian Rockies as it represents more of a mountain ascend than a scramble, many climbers attest its closer to an Alpine lower 5th class rated climb.  For a fit climber the accent time takes 5 hours and the total trip time about 8 to 10 hours.   The peak stands at 2940 meters. 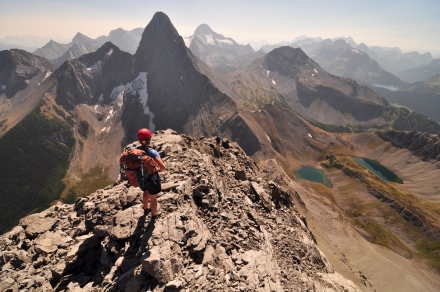 The ‘Oubaas’ liked a challenge in his mountain scrambles – Smuts would disappear for hours on end with long treks in the wilderness and he climbed Table Mountain more than 70 times, even at the age of 70. There is no doubt Smuts would have sprung at the opportunity to climb Mount Smuts and disappear for a day to do it.

Consider this when reviewing Smuts and his attraction to Mountains. As a young boy Jan Smuts had a mystical experience on the Riebeek-Kasteel mountain top (near the farm on which he was born in the Western Cape). He described it as a feeling of complete unity with all of nature around him. 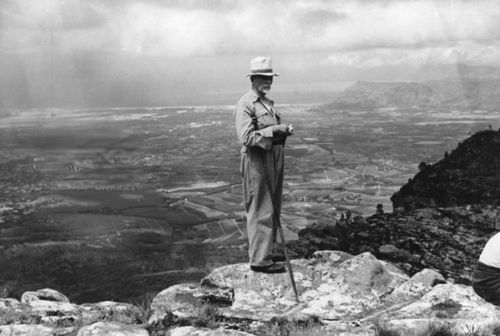 Jan Smuts experienced his surrounding nature so intimately that it felt like an extension of himself. And yet he experienced at the same time a distinct sense of ‘self’.  It was this idea of ‘transcendental self’ that was to form the base of his philosophy of holism.  To Smuts, the ‘transcendental self’ was the tendency of nature to cohere into greater hierarchies of unified wholes. The holistic process would culminate in its fullest expression in the human personality.  To this revelation on a mountain top Smuts once said:

“When I was young I saw a light, and I have followed that light ever since.”

His focus on unification of wholes led Smuts to reconcile the Boer and British nations after the bitterness of the 2nd Anglo-Boer War. It would cumulate in the Union of South Africa in 1910, to bring together the former Boer Republics of Transvaal (ZAR Republic) and Orange Free State into union with the former British Colonies of the Cape Colony and Natal. Smuts went further with holism and the unification of wholes when he advocated the transformation of the British Empire into a Commonwealth of self-governing Nations to King George VI (ending the ideals of ‘Empire’ – in fact Smuts coined the phrase ‘Commonwealth of nations’). This same philosophy of joining wholes led to the formation of the League of Nations after World War 1, and subsequently in the formation of the United Nations after World War 2. It was this simple ‘epiphany’ on a mountain top as a boy that ultimately led Smuts to draft he Preamble to the United Nations Declaration of Human Rights.

To his ideals on mountains and holism, on the 25th February 1923 during the unveiling of a memorial to members of the Mountain Club who had fallen in the 1st World War (1914 -1918) on top of Table Mountain, Smuts gave a landmark speech titled ‘The Religion of the Mountain”, take the time to read it in full, it’s a lesson to humankind.

The Religion of the Mountain 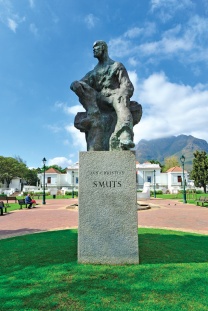 The Mountain is not merely something externally sublime. It has a great historical and spiritual meaning for us. It stands for us as the ladder of life. Nay, more, it is the great ladder of the soul, and in a curious way the source of religion. From it came the Law, from it came the Gospel in the Sermon on the Mount. We may truly say that the highest religion is the Religion of the Mountain.

What is that religion? When we reach the mountain summits we leave behind us all the things that weigh heavily down below on our body and our spirit. We leave behind a feeling of weakness and depression; we feel a new freedom, a great exhilaration, an exaltation of the body no less than of the spirit. We feel a great joy.

The Religion of the Mountain is in reality the religion of joy, of the release of the soul from the things that weigh it down and fill it with a sense of weariness, sorrow and defeat. The religion of joy realises the freedom of the soul, the soul’s kinship to the great creative spirit, and its dominance over all the things of sense. As the body has escaped from the over- weight and depression of the sea, so the soul must be released from all sense of weariness, weakness and depression arising from the fret, worry and friction of our daily lives. We must feel that we are above it all, that the soul is essentially free, and in freedom realises the joy of living. And when the feeling of lassitude and depression and the sense of defeat advances upon us, we must repel it, and maintain an equal and cheerful temper.

We must fill our daily lives with the spirit of joy and delight. We must carry this spirit into our daily lives and tasks. We must perform our work not grudgingly and as a burden imposed upon, but in a spirit of cheerfulness, goodwill and delight in it. Not only on the mountain summits of life, not only on the heights of success and achievement, but down in the deep valleys of drudgery, of anxiety and defeat, we must cultivate the great spirit of joyous freedom and upliftment of the soul.

We must practise the Religion of the Mountain down in the valleys also.

This may sound like a hard doctrine, and it may be that only after years of practise are we able to triumph in spirit over the things that weigh and drag us down. But it is the nature of the soul, as of all life, to rise, to overcome, and finally attain complete freedom and happiness. And if we consistently practise the Religion of the Mountain we must succeed in the end. To this great end Nature will co-operate with the soul.

The mountains uphold us and the stars beckon to us. The mountains of our lovely land will make a constant appeal to us to live the higher life of joy and freedom. Table Mountain, in particular, will preach this great gospel to the myriads of toilers in the valley below. And those who, whether members of the Mountain Club or not, make a habit of ascending her beautiful slopes in their free moments, will reap a rich reward not only in bodily health and strength, but also in an inner freedom and purity, in an habitual spirit of delight, which will be the crowning glory of their lives.

May I express the hope that in the years to come this memorial will draw myriads who live down below to breathe the purer air and become better men and women. Their spirits will join with those up here, and it will make us all purer and nobler in spirit and better citizens of the country.

Mount Smuts can be located at 50.8075N -115.387W for anyone wanting to find it – a Mountain which represents a man who was a mountain in his own right.  He once said of holism;

“(Concerning) the principles of holism…in this universe we are all members of one another…selfishness is the grand refusal and denial of life.”

Its a magnificent lesson and a great tribute. 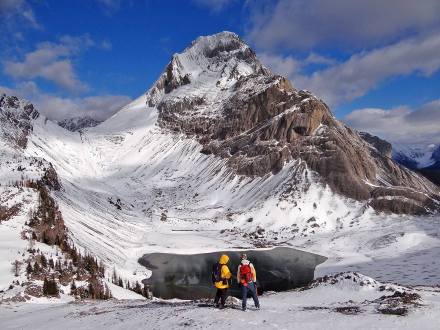 Mount Smuts in the Canadian Rockies

Jan Smuts Life “The force of his intellect has enriched the wisdom of the whole human race”- the death of Jan Smuts.

Reference, ‘Peakfinder’ Your source of information on the Peaks of the Canadian Rockiesby Dave Birrell and Politics today – exploring Jan Smuts’​ transformative ‘Religion of the Mountain’​ by Claudius van Wyk.  Photo credit ‘Our Journey’ Blog and Peakfinder.  A special thanks to Rheiner Weitz who brought this to our attention.

5 thoughts on “A Mountain of a Man – Literally! Mount Smuts”