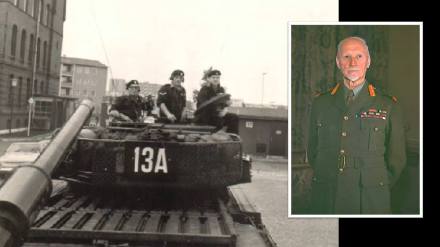 Smuts Barracks was situated on Wilhelmstraße, a street in the Spandau district of Berlin, and the base of the British armoured contingent to Germany, it’s located next to what was the famous ‘Spandau Prison’ . Also in Wilhelmstraße, Spandau Prison was completed in 1881. It was occupied by seven Nazi war criminals, convicted in the Nuremberg Trials after World War 2, including Rudolf Hess, who remained its only prisoner there for many years until he committed suicide. After Hess’ death the prison was demolished and replaced by a shopping centre.

Smuts Barracks (above and below), taken during 1 RTR’s tour of duty between Feb 67 and Jan 69.

The British armoured squadron based at Smuts Barracks consisted of 18 modified Chieftain tanks, painted in their renown urban camouflage, and were at a constant state of readiness. This “bombed up” state, ensured a speedy counter attack should the Soviet Union (Russia and East Germany mainly) breach the Berlin wall.

The last unit/squadron to be based here was C Squadron, The 14th/20th Royal King’s Hussars (1989-1993), a Cavalry Regiment of the Royal Armoured Corps. The squadron bar was known as the “Lion and Bear”. 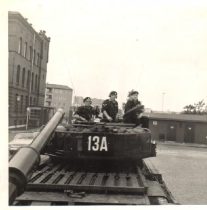 Between 1948 and 1952, the Smuts Barracks was used by the following Regiments stationed in Germany:

In Feb 1952 a permanent unit was formed, designated 1st Independent Sqn Royal Tank Regt. It was disbanded December 1957. Between December  1957 and Aug 1962, the squadron came from the APC (Armoured Personnel Carrier) regiment in BAOR:

After that date, the squadron normally came from the training regiment at Catterick:

Also based at Smuts Barracks  were 38 (Berlin) Field Squadron RE. 38 Field Company was stationed in West Germany as part of 23 Field Engineer Regiment when in 1957 it was amalgamated with the RE Troops Berlin to become 38 (Berlin) Field Squadron Royal Engineers. The Squadron remained in Berlin providing engineer support to the Berlin Brigade until 1994 when it was disbanded as part of options for change.

Smuts Barracks was also the home of the Sapper Berlin Field Squadron (38 Fd Sqn RE).

So there you have it, another legacy of Jan Smuts and an island of South Africa’s contribution to the Second World War and the Cold War after it.  The Barracks is now closed and under private ownership.

Jan Smuts: “The force of his intellect has enriched the wisdom of the whole human race”- the death of Jan Smuts. 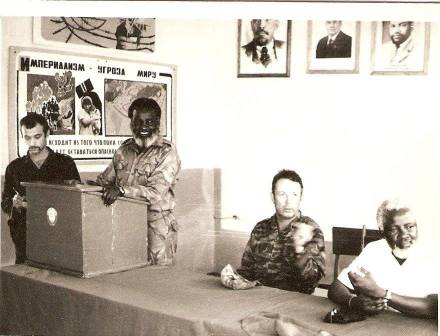 It is widely understood that the Angolan Border War or ‘Bush War’ was part of the ‘Cold War’. The Soviet ‘domino effect’ in Africa (the progressive movement south of Communism down Africa) was a real concern to many South Africans in the 1980’s and one of the primary reasons underlying South Africa’s involvement in Angola.  South Africans only had to look north to Zimbabwe see the wealth grabs of capital and farms and witness the economic and social dangers of communist philosophies in an African context.

To give context to this, and the influence of Soviet Communism in sub saharan Africa, here is the 1987 Soviet Mission to Angola, this picture was taken at Lubango — starting from left to right – Lt. Igor Ignatovich, the interpreter, Dr. Sam Nujoma, Colonel Vladimir Shayda Commander of the Soviet Mission (SWAPO 1985-1988) and Peter Mweshihange.

To understand the “Cold War” in the 1980’s, at the time that this photograph was taken there was virtually no “Western” diplomatic contact with the Soviet Union at all.  It was truly a firm stand-off between two super power blocks with the threat of nuclear attack a constant and present danger.  The Soviet Union and NATO states (USA, UK and Western Europe) were literally in an eye-ball to eye-ball stand-off, each side of a “iron curtain” that split central Europe down the middle.

South Africa, even as an Apartheid State, saw itself as a “Western democracy” allied to the “West” and as a consequence in direct opposition to the spread of Communism. The National party often positioned South Africa as leading the “Cold War” fight against Communism in Africa.  The National Party – from the very beginning of their accent to power in 1948 were fiercely anti-communist in their philosophy and by 1987 the “Rooi Gevaar” (Red Danger) warning was very central to their political rhetoric.

That “Soviet Communism” was going to come to a spectacular end with the fall of the Berlin Wall in 1989 was still a couple of years off, and it was this event and the collapse of Soviet communism that was to be the major catalyst for the withdraw of South African forces from the Angolan/Namibian border.