One distinctive thing about the Angola/South West Africa Border war was the vast array of ‘Soviet’ and Communist ‘East Bloc’ military equipment, materials and canned food.  Much of which became ‘war booty’ and prized by South African Defence Force personnel fighting in the conflict as a memento. To them, it all represented the very distinctive difference between ‘Western’ styled materials and those produced in Communist bloc countries at the time, in a sense it very much brought home just what the war in Angola was to them – part of the ‘Cold’ War of the ‘West’ against Communism.

During Ops Savannah in 1975, whilst in Angola some South African Defence Force (SADF) personnel came across a huge stash of East German Steel Helmets.  For some reason the SADF Artillery Gunners took an instant liking to these helmets and it became an instant ‘bush’ fashion. A prized possession, many Gunners sought out this helmet and whilst on Operation Savannah replaced their SADF issue ‘Staaldak’ M1963 helmets with it – it’s was a ‘gunners thing’ to look a little different and develop a distinctive combat zone ‘esprit de cour’. The feature image shows a SADF 140mm Medium Gun Crew somewhere in Central

The East German M-56 helmet was originally designed in 1942 as a replacement for the M1935/M1940 model WW2 German ‘Stahlhelm’.  The helmet had seen trials since 1943, but was not adopted during World War II. 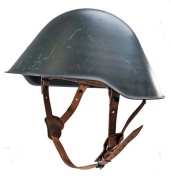 The design was never progressed and was unused until the requirement for a distinct German helmet for the Volkspolizie (East German Police) and the National People’s Army (East German Army) arose after Germany was split down the middle into the ‘Democratic’ West Germany and ‘Soviet Communist’ East Germany after WW2 ended.

The East German leadership adopted the M-56 helmet so as not to cause offence to their new Soviet masters by using their iconic WW2 German ‘Stahlhelm’ so they switched to this new design as it also closely resembled another iconic WW2 helmet – the Soviet SSh-40.

The M-56 helmet came in three basic versions, Mod 1 or I/56, Mod 2 or I/57 and Mod 3 or I/71, and was widely sold, or in most cases given free of charge, to Third World armies.  As Angola was deemed a 3rd World conflict by the East Germans it proved a fruitful country to off-load stocks of this helmet to the MPLA’s FAPLA and other Communist aligned military support groups in Angola.

Although there is not much on East German involvement in the Angolan/South West African Border War. Most military advisors and support troops to the Angolan MPLA Forces were either Russian or Cuban. East Germany as it was a Soviet ‘ally’ did play a role in support, and these helmets would point to this fact.