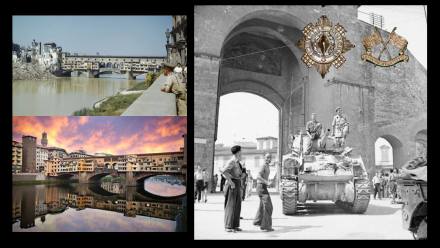 Did you know it was elements of South African armoured formations which were the first to enter the Italian city of Florence and given the honour of liberating it?  Chances are most people would not have a clue, the honour given to military formations of liberating capital and regional capital cities like Florence during World War 2 was a very big deal, but sadly in South Africa this very big feather in our military cap is lost to the majority.

The very fact that the iconic worldwide heritage bridge in central Florence – the Ponte Vecchio – still stands is thanks to South African armoured regiments who were the first to get to it and secure it, when all the other iconic historic bridges of Florence were blown into smithereens by the retreating German forces.

Civilians clambering over the ruins of the Ponte Alle Grazia, one of the bridges over the River Arno destroyed by the Germans before evacuating Florence.

The latter half the Italian campaign during World War 2 was all about the race of various units and ‘nations’ to liberate a city, a great emphasis was placed on the ‘honour’ that a particular formation would receive for doing it, the American’s had the honour of liberating ‘Rome’ it was given to the American 5th Army who secured the centre, the American 1st Armored Division (old ironsides) liberated Milan and Bologna’s liberation is given to the Eighth Army’s Polish II Corps’ 3rd Carpathian Infantry Division.

So, unknown to many South African’s our military has the honour of liberating Tuscany’s regional capital – Florence, an honour simply not placed on the country’s ‘national christian’ education curriculum of the old national party (who regarded the whole episode of South Africa’s WW2 campaign as one of Smuts’ folly and treachery) and now not even on the radar for any young South African studying our history.

In setting the narrative straight and re-kindling this honour, let’s have a look at what happened and ‘whodunnit’.

The Liberation of Florence

In a nutshell, the South African 6th Armoured Division, fighting at the crucible of the Italian campaign against Nazi German forces, spearheaded the Allied advance into Florence in August 1944. They were followed closely by the New Zealanders and then the British forces – as this short news clip from United News at the time recalls.

On 20 July General Kirkman XIII Corps commander, issued orders for a “…powerful thrust to seize all crossings across the River Arno to the west of Florence.” This effort was to be concentrated on the 6th South African Armoured Division front. The advance was to be led by the South African Division with the 4th Infantry Division to its right, supported on the flanks by the 6th British Armoured Division and the 8th Indian Infantry Division.

The Allies advanced through Greve and were stopped by the German 4th Parachute Division on the River Greve on 24 July. The Allies had, however, outflanked the German Parachute Division, who then withdrew during the night of 24/25 July, allowing the South African, New Zealand and Indian Divisions to advance to the Paula Line which was reached on 28 July.

General Kirkman again placed the South African and New Zealand Divisions as the spearhead of his Corps advance, this time to break the Paula Line and to take Florence. By the 3rd of  August columns of South African, New Zealand and 4th Infantry Divisions were advancing towards Florence. By 4 August, advance parties of South Africans and New Zealanders were exploring the outskirts of Florence to find that all bridges across the Arno River viable for military transport had been destroyed by the retreating Germans.

A South African armoured patrol, made up of the South African Imperial Light Horse and the Kimberley Regiment raced into central Florence and found the smaller (and iconic) Ponte Vecchio bridge intact, they crossed it under heavy shelling, entering into the centre of the city at 4 am on the 4th August 1944, to be crowned as the first Allied troops to enter Florence. 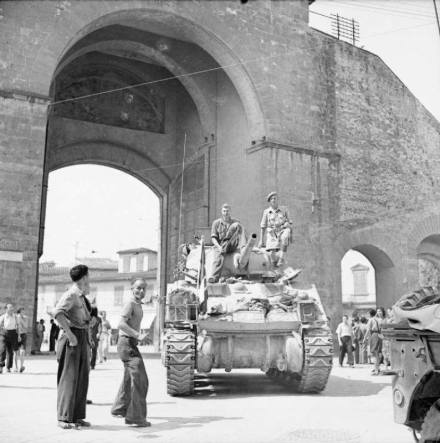 Over the years New Zealand have laid the claim of liberating Florence, and in that country it is a very big deal, however not to detract the New Zealand sacrifice (they were shoulder to shoulder with the South Africans in this particular fight) but is a sad fact is that nobody has really challenged New Zealand on this claim such is general apathy and lack of national pride in South Africa for our World War 2 sacrifice and battle honours.

South African tank crew in Florence, Italy on 7 August 1944 shakes the hands of cheering Italians welcoming liberation. From The Digital Collections of the National WWII Museum

The truth (and historic fact) is that it was a South African armoured regiment that secured the Ponte Vecchio bridge and entered the city first, it was the South Africans who were charged with the main spearhead and it is on both the historical record and media record at the time that the South Africans have the honour of liberating Florence.

So there you have it, another ‘Inside the Chappie wrapper’ interesting fact for the day and another reason to stand proud of South Africans.  The beautiful and historic city of Florence, the jewel of Tuscany and its central pride, the medieval Ponte Vecchio – all now enjoyed by a grateful nation and the world at large as an international heritage site, and it’s largely thanks to a heroic bunch of South Africans.