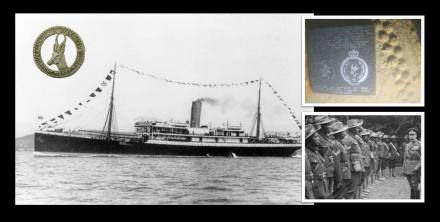 On 21 February 1917, during World War I, this chartered troopship – the SS Mendi – containing a full battalion of South African Native Labour Corps men and officers on its way to the western front was rammed in fog conditions in the English Channel. The SS Mendi sank in 25 minutes with the loss of 616 South Africans and 30 British. 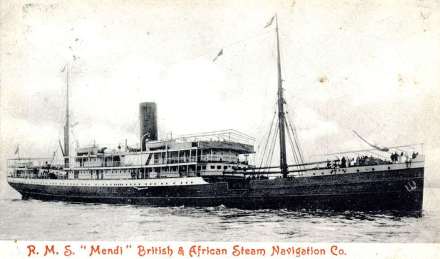 The greatest tragedy was yet to come as due to racial prejudice this event was somewhat down-played through the years and not enough recognition given to these men, something the South African Legion and the South African National Defence Force is now working very hard at redressing.

Darro, at almost three times Mendi’s weight, travelling ‘full ahead’ in fog conditions – not using her fog horn to warn shipping in the area or the appropriate lights – she rammed the troop ship with such force the SS Mendi sunk and was resting on the sea-bed within 25 minutes. The violent impact, nearly at right angles, left a gaping 20ft tear amidships instantly trapping more than 100 soldiers below decks who were unable to escape the rapidly rising water as the ship quickly listed to starboard.

Her crew, consisting 29 sailors, failed to launch sufficient life rafts for the 811 strong contingent of 5th Battalion South African Native Labour Corps (SANLC). In the dense fog and inadequate rescue effort that followed, many remained aboard the ship, unwilling to commit to an icy plunge.

They were reportedly exhorted by the Chaplain Rev Isaac Dyobha who called them together to die like warriors and brothers – what he said is now legendary.

He said “Be quiet and calm, my countrymen, for what is taking place now is exactly what you came to do. You are going to die, but that is what you came to do. Brothers, we are drilling the drill of death. I, a Xhosa, say you are all my brothers, Zulus, Swazis, Pondos, Basutos, we die like brothers. We are the sons of Africa. Raise your cries, brothers, for though they made us leave our weapons at our home, our voices are left with our bodies.”

They took off their boots, picked up imaginary spears and shields and performed an African war dance, a dance of death.

Thus, together, as brothers they chanted and danced on the tilting deck, facing death with unparalleled bravery until finally being sucked into the vortex created by the sinking ship.

The reference to weapons was to the fact that the South African Government had agreed to send black men to assist the Allied forces as labourers, but, due to policies of the time, they insisted they could not be given weapons. 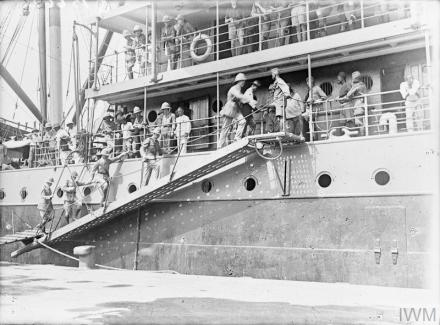 British officers going aboard the Mendi in Calabar, November 1916.

There were many more individual acts of bravery and selflessness in those terrifying early morning hours in the freezing water. A catalogue of failures exacerbated the final outcome, the Darro for example made no effort at all to rescue the men in the water, and ultimately it was that many of these brave men had no experience of the sea combined with extended exposure to the frigid February waters, off St Catherine’s Light, that accounted for the unusually high death toll.

Fewer than 200 of the 840 souls aboard the SS Mendi survived. The total toll on human lives lost that day reached a staggering 646.

The sinking was described first hand by Captain Lewes Hertslet of the Royal Army Medical Corps who survived the sinking when he was pulled out of the water by black South African troops and gave his account of the incident in 1940.

“I remember the jump into the bitter cold sea, the sinking below the surface, and the coming up again, the swimming to the boat that had been let down from our ship, and then cut adrift,  I felt my hands gripping the side as the rowers drew alongside us.” Hertslet remembers himself saying “Goodbye, my strength has gone” and then feeling the strong hands of a black trooper gripping his wrists and holding him up. “Then several others caught me around the chest and shoulders and dragged me, nearly dead, into the boat and so I am saved. Nearly 200 others were also saved, and all of us who are still alive remember the Bantu and Europeans who went bravely to their deaths on that black day of the last war.”

Although the then Prime Minister Louis Botha brought the South African Parliament to attention in remembrance of the tragedy and the impact to the community, convention and prejudice meant this dreadful tragedy was not afforded appropriate recognition by respective Governments in South Africa and the United Kingdom. South African officials during these years demonstrated their unwillingness to highlight black people’s wartime contributions by withholding medals and reasonable post-war recompense to ‘non-combatant men’ deemed somehow less valuable.

Particularly poignant was that South African Labour Corps men, drawn from a broad spectrum of backgrounds, had readily volunteered their services to support the British Crown’s war effort on the Western Front in the hope it would win them greater political concessions at home. The reality was that remarkably little changed for 7 decades.

Initial approaches are now been made to the British government by the SANDF Attache in London to see if this issue can be redressed and medals struck (this initiative and continuous drive must come from the South African government, time will tell whether they will achieve this), a memorial “commemorative” medal have also been struck for surviving family members and will make up part of the Centenary commemoration of the sinking of the SS Mendi. 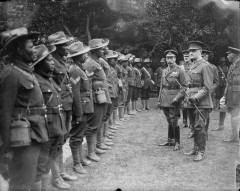 The British War Medal with King George V bust, the medal in question and King George V who is seen here inspecting N.C.O.’s of the South African Native Labour Corps at Abbeville, 10 July 1917.

The shipwreck has recently been awarded World Heritage and War Grave status and an increasing number of Memorials are testament to contemporary recognition for, and acknowledgement of the sacrifices made by not only the 607 South African Labour Corps men lost that day on His Majesty’s service but also many thousand silent black South African citizens who risked everything to join Europe, ‘like brothers’. 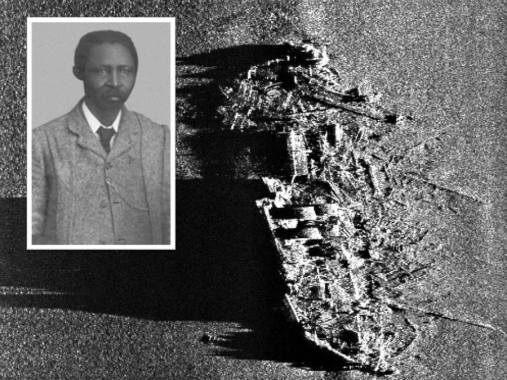 Rev. Isaac Williams Wauchope Dyobha (1852-1917) – see insert picture, our hero who called all to the death dance on the SS Mendi was a rather remarkable man – he was a prominent member of the Eastern Cape African elite in the late 19th and early 20th centuries, a Congregational minister, political activist, historian, poet and ultimately the legendary hero in the Mendi disaster.

As a Lovedale student he joined a missionary party to Malawi, he was instrumental in founding one of the first political organisations for Africans, a staunch ally of John Tengo Jabavu and an enthusiastic campaigner for the establishment of the University of Fort Hare. For over 40 years, from 1874 to 1916, he was a prodigious contributor to newspapers, submitting news, comments, announcements, poetry, hymns, history and biography, travelogues, sermons, translations, explications of proverbs and royal praise poems. He used nom de plume Silwangangubo, Dyoba wo Daka and Ngingi and published The Natives and their Missionaries in 1908. 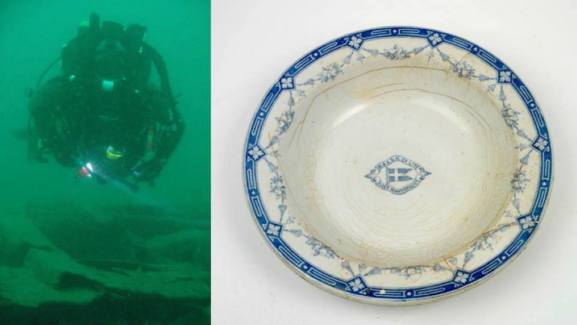 This is a recent picture of a diver on the wreck of he SS Mendi and an artefact recovered from the wreck.

The Mendi sinking is considered one of the greatest tragedies in the history of the South African military, and was one of the worst maritime disasters of the 20th century in British waters.

For South Africans this is especially important as there are very few physical reminders of this tragedy, such as this photograph BASNC plate courtesy of David Wendes.

Some small things can be seen on the wreck, such as some of the plates that the men would have eaten off. It was the crest of the British and African Steam Navigation Company on some of these plates that allowed divers to identify the wreck as the Mendi.

For many years in South Africa the only memorial to these men was a life ring with the words “SS Mendi” on it on a railing in Simonstown, South Africa and the Hollybrook Cemetery Memorial which listed all the names of the SS Mendi missing in Southampton, England.

Happily this suppression of Black South African contribution to WW1 is no-longer the case, after 1994 memorial statues to the SS Mendi memorials now exist in Pretoria, Cape Town and Johannesburg.  Memorial services are held countrywide and form part of the SANDF’s Armed Forces Day (Mendi Day).  Awards and decorations for Bravery in the name of the Mendi have been issued, and the South African Navy has named two ships – the SAS Mendi (a Valour class Frigate) and the SAS Isaac Dyobha (a Warrior class Strike-craft).  Memorial services are also regularly held overseas in Southampton England and Noordwijk Netherlands.  A dedicated exhibit now also takes up place at Delville Wood in France. 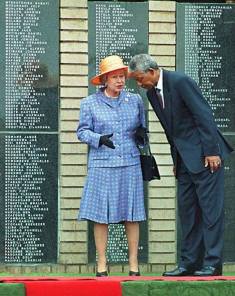 The image to the left of the Atteridgeville memorial is Her Majesty Queen Elizabeth II and President Nelson Mandela unveiling the memorial to the SS Mendi in Soweto, South Africa.

The immediate recognition of this event by the British government in 1995 was one of the first acts by the Queen on her return to South Africa – she had last been in South Africa in 1947 and was prevented from visiting again as South Africa had “resigned” from the Commonwealth in the intervening years of Apartheid.

Once South Africa rejoined the Commonwealth in 1994, such was the importance and urgent need to recognise this tragic event as a fundamental building block to nation building it took centre stage of Royal visit not seen in South Africa for 47 years.

The Centenary of the sinking of the SS Mendi passed in February 2017, and after all was said and done by way of ceremonies aboard the SAS Amatola and at Hollybrook in England and all the speeches and praises by visiting politicians to the United Kingdom completed, it was the military veterans (who were largely left out of the fanfare), who continue to carry this flame of remembrance for their ‘brothers’.

This point was most poignantly expressed by The South African Legion of Military Veterans in deed, after the SANDF and fanfare returned home, the SA Legion performed a most subtle but very striking dedication when the wreck was dived in an official dedication ceremony held in August 2017 by the SA Legion; England Branch Chairman – Claudio Chistè (a ex SA Navy Diver) doing the honours.  They then placed a plaque on the wreck itself in dedication and in permanent memory of their ‘brothers’. 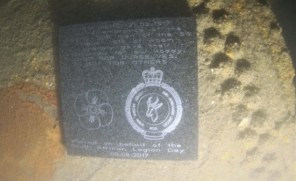