Not many people today are aware that Umkhonto we Sizwe (MK) insurgents actually attacked some bone-fide South African Defence Force (SADF) military installations, but only a handful of occasions and this story covers one of them – the bombing of the Witwatersrand Command’s building – the Drill Hall (known as Wit Command).

Other than the very effective bombing of Wit Command and the Nedbank Plaza in Church Street, Pretoria (which also housed the target – a SAAF command office), the only other standout ANC MK attacks on actual SADF installations were low key and completely ineffectual.

Information on the bombing at Wit Command itself is really difficult to come by, at best it is presented as a resounding victory by MK claiming 58 injuries and 1 death of SADF personnel and at worst there is little to almost no information, video or photographs in both the military and media records of showing any deaths.  There is certainly no death of a SADF serviceman recorded on the honour roll. So where does the truth lie?

There are two key reasons why ‘in-depth’ knowledge of this incident remains obscured.  Firstly, although a bomb had gone off in down-town Johannesburg (no hiding that), the grip of the National Party over South African media limited it and ensured the incident would be carefully managed (attacks on SADF military installations would affect morale) and, more importantly, it was very carefully managed because of the profile of the Umkhonto we Sizwe (MK) attacker who committed it.  The outcry, profile and ‘hunt’ for him was somewhat muted, angry announcements identifying him for the purposes of the ‘hunt’ were made, yes – but in-depth media analysis on the attack or investigative journalists seeking an exposé on the attacker’s profile and motivation – no – there’s nothing of this sort.

Simply put, this ‘managed’ outcry was because this particular MK operative was from an upper class, ‘white’ Afrikaner, well to do and influential family.  He grew up in an up market ‘white’s only’ conservative suburb in Johannesburg and attended a prestigious Afrikaans High School  – he didn’t fit the National Party’s ‘swart-gevaar’ (Black danger)/’rooi-gevaar’ (Communist danger) terrorist narrative of the time, he was in fact embarrassing enough ‘one of their own’.

So, lets get to the ‘truth’ of matter in all of this, what was the actual damage caused, what actually happened?

On 30 July 1987, a bomb exploded at the Witwatersrand Command’s Drill Hall injuring 26 people (no deaths), the injured were made up of a mix of both military personnel and by-standing civilians. The Drill Hall was targeted because not only was it a military installation, it was also the same historic Hall in which the 1956 Treason Trial took place and significant to ‘struggle’ politics.

The ‘Treason Trial’ had lasted from 1956 to 1961 (not to be confused with the ‘Rivonia Trial in 1964) and revolved around 156 people arrested on charges of treason – it was overseen by Oswald Pirow and it included a mix racial bag of South African political party leaders from across the spectrum, notably Nelson Mandela, Ahmed Kathrada, Walter Sisulu, Stanely Lollan, Helen Joseph, Joe and Ruth Slovo and Leon Levy to name a few.  They were all found ‘not guilty’ but the trial did force Oliver Tambo into exile. 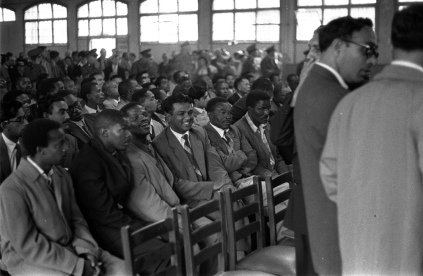 Treason Trial in the Drill Hall

So, like the mixed racial bag of the Treason Trial itself, the actual attack on the Drill Hall (by then a SADF command centre and military building) did not come from an angry disenfranchised ‘Black’ ANC MK operative, rather, this attack came from very “blue blooded” ‘White’ Afrikaner – Heinrick (Hein) Grosskopf.

As part of the Amnesty Truth and Reconciliation Commission hearings Hein Grosskopf, by that stage a former MK operative, revealed how he detonated a car bomb at the Witwatersrand Command military base.

Grosskopf, a graduate of Linden Hoërskool (High School) and the son of Johannes Grosskopf, a former editor of the Beeld newspaper, said he joined the African National Congress in exile in 1986 after concluding that apartheid was reprehensible.

He linked up with the ANC in Lusaka, where he volunteered for MK military service and after undergoing training in Angola, he returned to Lusaka at the end of 1986.

Six months of planning then went into the attack, which was to be a “one-man” operation. An attack on the Braamfontein gas works in Johannesburg had also been considered, but it was rejected as too dangerous for civilians in the area. Witwatersrand (“Wit”) Command was chosen after much deliberation and according to Grosskopf;

“Because the state had so clearly politicised the role of the SA Defence Force by deploying troops in townships, SADF personnel and installations were by definition justifiable targets.”

The explosion was planned to go off by 9.45am, when the morning rush-hour was over, children would be in school and restaurants around the site were still closed. A car with an automatic gearbox would be used and by lashing the steering wheel in a fixed position, the car could be made to move without a driver towards the target.

In June 1987, Grosskopf entered South Africa on a motorcycle from Botswana, along the way he bought an old Valiant pickup ‘bakkie’ in De Deur and travelled to Johannesburg with the motorcycle in the back of the ‘bakkie’.

After booking in at the Holiday Inn in Pretoria, under the name if JR Evans, Grosskopf rented a small flat in Linden, Johannesburg (a suburb he was highly familiar with and near his old High School).

Between the 5th and 10th of July 1987, Grosskolf carried out reconnaissance at Wits Command and found it would be possible to park in Quartz Street, opposite the target. He also measured the height of the pavement the attack vehicle would have to mount before reaching the wall of Wit Command.

After concluding that the operation was feasible, Grosskopf returned to Botswana and requested 120kg of explosives from his support group. The load was hidden behind the seats of the bakkie, and steel plate was welded over it.

On July 17, Grosskopf rented a house in Ventersdorp, intending to use it as an operational base, believing that a single Afrikaner would be under less scrutiny in a small town than in Johannesburg’s suburbs, but as he was moving in, two policemen arrived and asked why his bakkie was registered in a name different from the one he used when renting the house. Thinking his cover might be blown Grosskopf spent only one night in the house before returning to Johannesburg.

Early on the day of the attack, he rode into Johannesburg on his motorbike and left it two street blocks from the target. He returned to the Linden flat by taxi. Around 9am he left for Johannesburg after loading the explosives into the bakkie. The vehicle was parked in Quartz Street. With the car idling, he lashed the steering wheel in the required position and threw three switches to arm the vehicle and bomb, got out the vehicle, locked it and walked towards Sterland (a cinema complex) next to Wit Command.

Just before reaching the inside of the Sterland complex proper, the Valiant’s engine revved very fast and loudly, with the explosion that followed. He jumped on the motorcycle and rode back to Linden, collected some belongings and then headed for Botswana on the motorcycle.

Aletta Klaasen was 17 years old when she lost her left eye in the explosion. Minutes before the blast she had been talking to two SADF soldiers in front of the building, Cpl. Paul Duncan and his army chum Stoffel, when Grosskopf parked his vehicle close by to where they where standing.

She noted Grosskopf looking in her direction and called out to him “What are you looking at – I’m not for sale” (the area around Wit Command was a notorious ‘red light’ district known for prostitution). He turned around and walked off and shortly after that the bomb went off.

When she recovered from the blast she noted that one of the SADF troops, Cpl. Paul Duncan, who she was chatting to, was blown off his feet and found in the guardhouse, bleeding from the head and unconscious – he later fully recovered from his injuries.

An unassuming, quiet and reserved person, Grosskopf built up his resentment of the status quo whilst a student at Linden Hoērskool, were he had been bullied and teased by the vastly conservative white Afrikaans students for his “liberal” views. On matriculating from Linden Hoërskool, Hein Grosskolf, although openly stating he would never join the South African Defence Force (SADF), did in fact attend to his national service military call up and was discharged from his SADF conscription commitment on medical grounds. Highly politicised, he then went on to join the ANC and its military wing MK.

The Drill Hall after the bombing was deemed by the SADF to be an ‘unsafe’ building due to structural damage caused it and the Command moved into a high-rise building adjacent to the Drill Hall. On occasion the Drill Hall would be used by Citizen Force units and Regiments for mustering (in the very famous hall in which the Treason Trial took place) but more often than not it remained empty but guarded during the early 1990’s.

Once the command relocated from the high-rise building to Doornkop military base in the mid 1990’s, the drill hall building was taken over by vagrants and became an informal settlement – it eventually became derelict, caught fire and burned down. Today, the façade and some perimeter buildings is all that remains of the complex.  The façade has been restored as a monument to Johannesburg’s history and the significant historical events which took place in the building – including it’s bombing.

Aletta Klaasen and Hein Grosskopf were both at the TRC Hearing in November 2000, Grosskopf apologised to Aletta in person and regretted the injuries caused to civilians. Grosskopf concluded the meeting by saying that he was proud of the small role he had played in the struggle for freedom.  He said,

“Taking a life is never easy. I believe all life, even that of my enemies is sacrosanct. Violence can never be good; it can only be necessary. I am truly sorry for the injuries and suffering I caused”

At her request Klaasen and Grosskopf met for a few minutes in private after the hearing and then they both posed briefly and rather awkwardly for this photograph (note the body language). Neither of them elaborated on their meeting, Klaasen was only prepared to say that it had been good.

Heinrich Grosskopf, was granted amnesty by the Truth and Reconciliation Commission on 13th December 2000 whilst he was resident in the United Kingdom, it is thought he may still be there, and there is an irony here.  One of the SADF victims of the bombing – Paul Duncan, also lives in the United Kingdom now.  Paul was kind enough to recount his eye-witness account (both as a casualty and the fact that he was very near the epicentre of the blast). ‘Reconciliation’ and ‘apologies’ aside, I have it on good authority that it’s very unlikely Hein will be attending one of Paul’s famous ‘braai’s’ (a South African barbecue) in England anytime soon.

Written and researched by Peter Dickens

PD School Rocketing: The not so ‘spectacular’ MK attack on Voortrekkerhoogte

The ‘white’ struggle: The ‘White’ armed struggle against Apartheid