This South African fighter pilot ace shot up the famous General Erwin Rommel’s staff car in France in 1944. Rommel was thrown out of the car, suffered a severe skull fracture and it was effectively game over for Rommel’s participation in World War 2.

Here is our hero, and there is more to this ace than shooting up Rommel. Squadron Leader J J Le Roux, Commanding Officer of No 602 Squadron Royal Air Force seen in the cockpit of his Supermarine Spitfire Mark IX, “Betty”, at B11/Longues, Normandy.

Johannes Jacobus “Chris” Le Roux was born in Heidelberg, in the Transvaal, South Africa, in 1920, and received part of his education at Durban High School. He subsequently joined the Royal Air Force, and served with No 73 Squadron in France as part of the Advanced Air Striking Force (AASF), where he too part in the latter stages of the debacle that was “The Battle of France”, the squadron withdrawing from France on the 17 June 1940.

Le Roux was then took part in the Battle of Britain, both opening his account on arial victories and having to bale out of a blazing Hurricane. Le Roux is said to have been shot down on no-less than 12 occasions during 1940, which is incredibly remarkable, and if so, it’s a wonder he survived as long as he did.

Le Roux enjoyed better luck with No. 91 “Nigeria” Squadron in 1941 and 1942, shooting down eight enemy aircraft before joining No. 111 Squadron RAF in North Africa. He ended his second tour in command of the Squadron.

Following a rest from operations he was given command of No. 602 Squadron in July 1944.  He carried out an incredible number of sorties – 200 in total.  He won the Distinguished Flying Cross – not once but three times, here are the citations:

This officer has carried out over 200 operational sorties which have included shipping reconnaissances, during which much valuable information has been obtained, and numerous attacks on shipping and enemy aerodromes in the face of heavy enemy fire. Flight Lieutenant Le Roux has destroyed 3 hostile aircraft in combat and at least 1 on the ground.”

Since being awarded the Distinguished Flying Cross this officer has destroyed a further five enemy aircraft. In addition to his air victories he has attacked shipping and targets on the ground with considerable success. At all times Flight Lieutenant Le Roux has displayed a fine fighting spirit.”

“Sqn. Ldr. Le Roux’s magnificent leadership has played a large part in the many successes attained by his squadron. He has personally destroyed 14 enemy aircraft and damaged many others, and has also inflicted much damage on enemy shipping.”

On one occasion  Le Roux’s aircraft was “so badly damaged by flak after he had strafed a convoy of vehicles that it looked impossible for anyone to have flown it, but he made base successfully”. To the airmen of 602 Squadron he was known simply as the “Boss” , “in the air a cool, calculating tactician and disciplinarian, on the ground his personality shone out in the social life of a very happy team”, and his “keen vision frequently enabled him to shoot down aircraft which other members of the squadron flying with him had not even seen” (an attribute he shared with fellow South African RAF air-aces “Sailor” Malan and “Pat” Pattle).

Le Roux is generally credited as the pilot who attacked and badly wounded Generalfeldmarschall Erwin Rommel in his staff car on the road between Livarot and Vimoutiers on 17 July 1944, the day on which he also destroyed two Messerschmitt Bf 109s and damaged two more to bring his victory score to 23.5. 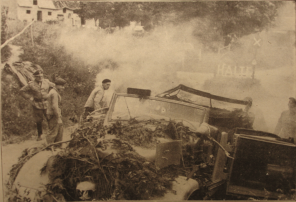 In the early morning of July 17, 1944, a staff car left Rommel’s headquarters at La Roche Guyon. The passengers included Rommel, his aide Captain Helmuth Lang, Major Neuhaus, Sergeant Holke, and their driver, Sergeant Karl Daniel. The journey was one of Rommel’s routine inspections of the front line. By January 1944, Hitler had forbidden Rommel from traveling via aircraft, as several high-ranking officers had been killed in air crashes.

Rommel sat in the front seat, to the right of Sergeant Daniel. Captain Lang sat behind Rommel with Major Neuhaus behind the driver. Sergeant Holke sat in the middle, looking out for aircraft.

Sergeant Holke noticed enemy fighter aircraft diving toward the car. Daniel was instructed to speed up and turn off on a small side road 300 yards ahead, toward a farm. Before the car reached the side road, it was attacked by the first aircraft (piloted by Le Roux) at a range of about 500 yards.

Rommel was looking backward holding onto the door, and was thrown from the car as it turned over. Rommel suffered a severe head injury that left him immediately unconscious, and he had deep gashes from the shattered glass.

Rommel lay helpless 20 yards behind where the car had finally come to rest Captain Lang had jumped out of the rear door as soon as the attack began. Major Neuhaus suffered a pelvis fracture from shell fragments that hit the holster of his revolver, and Sergeant Holke was not injured.

After a second strafing pass, Captain Lang and Sergeant Holke ran from shelter to carry Rommel to a small cottage on the side of the road.  Rommel remained unconscious as he bled from his left eye, mouth, a deep gash in his left temporal region, and several superficial cuts. The obvious disfigurement of his skull in the temporal region led his comrades to believe he was dead. Captain Lang rode a bicycle to Vimoutiers and returned 45 minutes later with a car.

Lang took Rommel to a Roman Catholic home for the aged. There, he was examined by the first medical professional who made the following diagnoses: “a fracture of the petrous part of the left temporal bone, a perforation of the left tympanic membrane with blood coming from the external auditory canal.” He also had sustained a fracture through the left orbital arch, had a weak and thready pulse, and was in a deep coma, but eventually made a very slow recovery.

Rommel died three short months afterwards on 14 Oct 1944, he was accused of taking part in the assignation attempt on Adolph Hitler and was encouraged to commit suicide. Rommel thought the matter over, when an SS detachment surrounded his village, leading him to conclude that if he agreed to face the People’s Court, he would not reach Berlin alive. With that in mind, Rommel opted to commit suicide by taking cyanide capsules given to him.

The official story of Rommel’s death, as reported to the public, stated that Rommel had died of either a heart attack or a cerebral embolism—a complication of the skull fractures he had suffered in the earlier strafing of his staff car.

To further strengthen the story, Hitler ordered an official day of mourning in commemoration. As previously promised, Rommel was given a state funeral. Rommel had specified that no political paraphernalia be displayed on his corpse (he was a military man at heart and not a strong supporter of the Nazi cause), but the Nazis made sure his coffin was festooned with swastikas. The truth behind Rommel’s death became known to the Allies when intelligence officer Charles Marshall interviewed Rommel’s widow, Lucia Rommel as well as from a letter by Rommel’s son Manfred in April 1945.

Not long after the strafing Le Roux was also dead, on 29 August 1944, Le Roux took off in bad weather to collect some beer for his Squadron from England, but was lost en route, his plane crashing in the channel near the headland of Selsey Bill (West Sussex). Le Roux was to leave behind an English wife and two children, the family resident at the time in Shropshire.

A number of other accounts of Rommel’s staff car shooting have been credited to other pilots, in all a South African (le Roux), a Frenchman (Remlinger), two Canadians (Fox and Rohmer), a American (Jenkins), two Englishmen (Swizer and Baldwin), and a Pole (Stanski) all claimed they hit Rommel’s car in the aftermath of the attack; however it is widely understood in mainstream historical reporting that Chris Le Roux was the man.