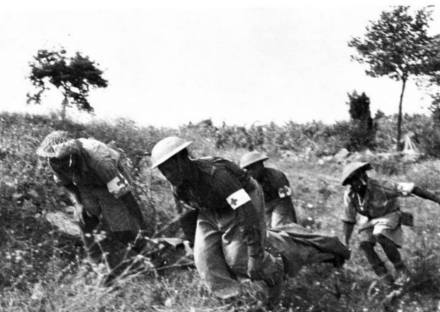 The culture of owing a debt of gratitude to South Africa’s military veterans is sorely lacking – for all of them, then and now.  But especially to these very forgotten South African “Black, Indian and Coloured” WW1 and WW2 heroes of which the current generation really does have little or no understanding.  It’s truly a tale of the suppression of history and the fight for recognition.

The featured image is a very rare photograph of South African medics in combat in WW2 during the Italian Campaign, dramatically caught running stooped under intense fire to stretcher bear a wounded man out of the combat zone. What is even more interesting is the make-up of these South African 6th Armoured Division medics. Here we have men from the South African Cape Corps, the South African Native Military Corps and the South African Indian Service Corps all involved in this casualty evacuation.

The politics of the day had an odd philosophy underpinning it. During the Second War the South African Union Defence Force still differentiated and segregated Corps according to race. However such was the odd politics of the time that men drawn from the Cape Coloured and Indian communities into their respective corps could function in combatant roles and carry firearms – as well as non combatant roles – such as a medic. However Black men drawn into the Native Military Corps (NMC) could not function in a combatant role and where not allowed to carry firearms – although they could carry a spear when on guard duty. They could however step into harms way in combat and put their lives on the line, as is seen here doing stretcher bearing as a medic.

All this politically driven segregation mattered not a jot when the bullets started flying around. This picture stands in stark testimony to this.

As is often the case in combat, and many veterans will attest to this, the man who joins you in the fight is your brother – irrespective of the colour of his skin – there is no such thing as racial segregation in a foxhole.

There is certainly no such thing as segregation when it comes to your fellow countrymen from across the racial spectrum risking their lives to save one of their own countrymen in a full blown firefight – as is so demonstrably shown here. These are all South African heroes – it’s that simple.

During the Second World War Black, Coloured and Indian South African community and political leaders, agreed to support the South African Union government’s declaration of war against Nazi Germany and send members of their community into the fight. The hope was that it would buy them more political currency and leverage at the negotiation table after the war for extended rights and political representation. Initially it looked like this would pay off as Jan Smuts and his United Party proposed giving qualified franchise votes to Black citizens whose service in the military was also deemed as such a qualification.

Unfortunately this very progressive way of thinking did not sit well with the National Party and their supporters and they used it as a Political “race” card in their campaigning in the 1948 elections. So much s that they rather unexpectedly and very narrowly won the elections and ousted Jan Smuts and the United Party.

The true tragedy was yet to come.  Not only was all this sacrifice and valour in vain – the National Party went to great lengths to further marginalise these soldiers – denying them medical aid, reduced pensions and excluding them as veterans from Remembrance and Military Parades, as well as denying them access to veterans facilities and organisations.

It was not unusual to find a small grouping of Native Military Corps veterans sitting under a tree away from the national parade with their medals proudly flickering in the sunlight, telling their war stories to anyone prepared to take the time to listen to them.  Excluded, forgotten and vanquished as traitors for serving “Britain” by the reigning Nationalists.

The political philosophy of the time substantially down-played the contribution of “non white” servicemen lest heroes be made of them. History in South Africa would record both the First and Second World War’s as a white man’s one – when nothing can be further from the truth.

It’s an often ignored fact and statistic – one which most certainly the National government after 1948 did not want widely published – which was that 40% of the standing South African servicemen in WW2 where persons of “colour”. In all more than 146,000 whites, 83,000 blacks, and 2,500 people of mixed race served in the standing forces of the Union of South Africa at this time.

We as South Africans need to work to address the historic void created by political posturing at the detriment of the country’s forgotten WW1 and WW2 heroes. This is why the recognition of the sinking of the Mendi and other commemorations becomes so important – it’s our duty as South African veterans to uphold honour where honour is well due. Not only to these men, but to anyone who has served in South Africa’s defence forces.

4 thoughts on “Skin colour is irrelevant in a foxhole!”