Field Marshal Jan Smuts, at the invitation of Winston Churchill addressing both houses of the British Parliament on the 21st October1942. This speech is historic, never before was any Commonwealth Statesman given the privilege of addressing both houses of Parliament (the Commons and the Lords), and the results are astounding – not only was Smuts publicly praised by Winston Churchill at the end of his speech, the entire Parliament breaks into hoorays and sings “he’s a jolly good fellow” in praise of the man and his life’s work.  This speech is well worth viewing and here it is, in full.

Two great South Africans have the privilege of statues outside the British Houses of Parliament in London, both having addressed this house at Westminster, and they stand in Westminster square for good reason. This was a period when Jan Smuts took his broken country from the Boer War, unified it and built it into an international powerhouse – at this occasion Smuts receives the praise due a visionary world leader.

The vast majority of both English and Afrikaans speaking South Africans backed Smuts at the time, however his legacy – like any great man’s legacy – is tainted by his opposition – The National Party, who, when they came into power served to demonise him over decades – so much so that he remains an enigma to many South Africans today. Except when you find gems like this film clip – which can bring him back into living memory.

Look out for Smut’s comments on the necessity to rid the world of Nazism, his insightful summary of Hitler’s policy in Europe and for his views on he formation of the United Nations – to which he is founding signatory. 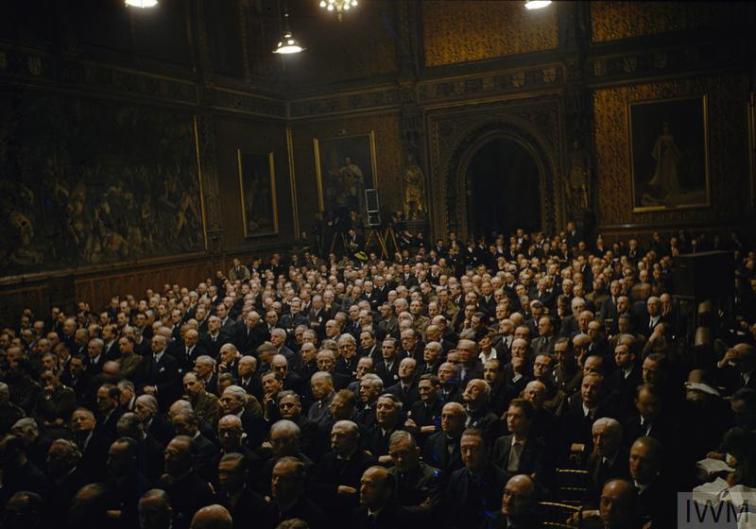 To think that Smuts was a South African War Boer General, and both he and General Louis Botha understood that the salvation and re-building of their shattered people lay with their former enemy. Their vision of unity built South Africa from a fractious grouping of colonies and tiny states into a significant and unified nation – a regional economic power-house. The fact that his former enemy stood up in praise of this man and his achievement speaks volumes.

Jan Smuts is literally the “father of the nation” that is South Africa today and it’s a great pity he is so misunderstood. As anyone who watches this video will see, thanks to this remarkable man, South Africans by the end of World War 2 stood with heads held high, chests swollen with pride, praised by the free world and revered by great men.

History unfortunately would dramatically change course for South Africa a couple of years later, when in 1948 the National Party narrowly edged its way into power in the general elections with a proposal called Apartheid.  South Africa has swung from ‘Pariah State’ far right racial politics to ‘Junk Status’ economic leftist politics in response to the secular race politics – with very little regard for Smuts’ centralist or “centre ground” reconciliatory politics since.

To read more about Smuts and some of his lifetime achievements and body of work, click on this link “The force of his intellect has enriched the wisdom of the whole human race”- the death of Jan Smuts.

My Tweets
Join 3,457 other followers