HMS Hecla was built on the Clyde as a destroyer depot ship and after being commissioned on the 6 January 1941 was based at Havelfjord in Iceland as the mother ship for the destroyers escorting the Atlantic convoys which kept Britain from starving. 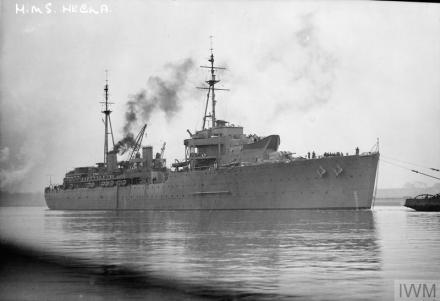 In the summer of 1941 Hecla was joined by the repair ship USS Vulcan and that Autumn returned to the Clyde for a short refit after which it headed south to an unanounced destination in the southern hemisphere. It was to have joined the fleet being assembled to defend Singapore against the Japanese but detonated a mine off the coast of South Africa and limped into the naval port of Simonstown where it spent several months under repair. These months were a happy interlude for its crew and it took on a number of South African Naval Force personnel as crew.

On the 20 October with Capt G.V.B. Faulkner RN in command Hecla left Cape Town with Convoy CF.7 for Freetown escorted by HMS Shropshire. On arrival at Freetown on the 2 November they joined the destroyer depot ship HMS Vindictive as part of Convoy CF.7A whch left with a strong escort on the 4 November for Liverpool. A young RNVR rating, Tom Davis, on the destroyer escort HMS Active took this last photograph before it was torpedoed less than a week later.

The two destroyer depot ships, HMS Hecla and Vindictive, were joined by the destroyer escorts, HMS Venomous and HMS Marne, near the Canaries on the 8 November and detached for Gibraltar to support the ships taking the troops to the invasion of north Africa, Operation Torch.

HMS Hecla was torpedoed by U-515 commanded by German U-boat ace, Werner Henke. At 00.15 hours on 12 Nov 1942,  U-515 fired a spread of four torpedoes at HMS Hecla commanded by A/Capt G.V.B. Faulkner, Royal Navy.  The HMS Hecla was misidentified as a Birmingham-class cruiser and hit her in the engine room. Two torpedoes were surface-runners and the last also malfunctioned and was a circle-runner. The U-boat then hit the ship with three coups de grâce at 01.28, 01.49 and 02.06 hours, sinking the vessel west of Gibraltar.

Every man for himself

An eyewitness report from Lt. Cmdr Henry Alexander (RN), the Navigation officer on the bridge of Helca describes the torpedoing of his ship

“… (a) torpedo blew up abreast our mainmast on our port quarter and was probably responsible for killing our entire cypher staff including my splendid Gyro Compass Artificer … the last torpedo must have struck near where he was working. After a very few minutes a third torpedo was audible and the bubble track seen coming straight towards our bridge. The explosion sent up a column of water like a giant fire hose and gave us all a sound blessing a second time, coming down. The situation then looked hopeless and orders were given for “Abandon ship stations” and finally, “Every man for himself”. 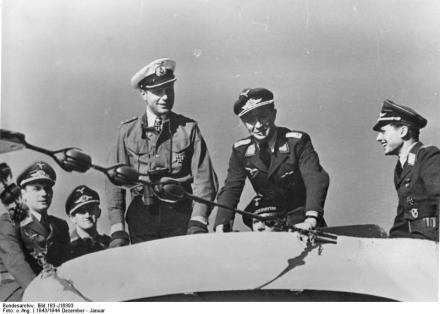 At 02.11 hours,  U-515 fired two torpedoes and badly damaged the HMS Marne (G 35) (LtCdr H.N.A. Richardson, DSO, DSC, RN) whilst she attempted to rescue the survivors of HMS Hecla. Fifty four ratings and ten officers were rescued by HMS Marne before she was hit in the stern by a torpedo intended for Hecla killing 14 of her crew.

HMS Venomous (under the command of Cdr H.W. Falcon-Steward, RN)  broke off its rescue efforts to pursue the U-boat, having chased the submarine off, the HMS Venomous returned to pick up more survivors from the HMS Hecla and eventually landed them at Casablanca.

The performance of Cdr Falcon-Steward and his officers and crew in fighting the U-boat while rescuing survivors was praised by Admiral Cunningham in his report. Every member of the crew played their part in the rescue of survivors, some risking their own lives by diving in to help the men in the oil covered water.

The Anti Submarine Bosun on HMS Venomous, Warrant Officer H.J.B. Button RN was an unsung hero. Herbert “Jimmie” Button, was a strong swimmer. He gave his own life to save the lives of others, diving in repeatedly to rescue the men struggling for their lives in the oil covered water, only to die a few days later from his exertions.

One survivor was Lt. Herbert Hastings McWilliams of the South African Navy. This recently commissioned 35 year old officer in the South African Navy, an architect in his father’s practice in Port Elizabeth before the war, had enlisted as an ordinary seaman in 1941 and joined HMS Hecla at Simonstown on the 4 September 1942.  He was an exceptionally gifted artist and his wonderfully realistic paintings of Hecla sinking on the back of old charts (based on sketches done with a throat brush and a mixture of iodine and rum  from the sick bay of Venomous).  His paintings are in the Imperial War Museum, London.

The Sinking of HMS Hecla with the Destroyer HMS Marne by Lt Herbert Hastings McWilliams: HMS Hecla pitches sharply to one side. Many figures can be seen on deck struggling in the water and climbing over board. There are several life boats in the foreground and a large explosion in the background as HMS Marne is targeted. Copyright: © IWM.

U-515 sinking on her Sixth and Final Patrol

On 8 April 1944, U-515 spotted a carrier-based aircraft and submerged; an hour later she surfaced and was attacked by another aircraft. U-515 engaged the machine with her 3.7-cm anti-aircraft gun. The plane’s bombs missed the U-boat and U-515 failed to shoot down the aircraft.  The next day, 9 April 1944 U-515 was again attacked north of Madeira by the destroyers USS Pope, USS Pillbury, USS Chatelain and USS Flaherty.  Flooding and loss of depth control forced the U-Boat to the surface, where she was sunk by rockets fired from Grumman Avenger and Grumman Wildcat aircraft and gunfire from the destroyers.

Sixteen of U-515‘s crew were killed, but 44 survived the attack. The survivors were picked up by the destroyers and later transferred to the aircraft carrier USS Guadalcanal. 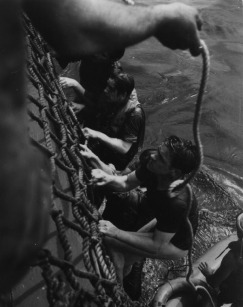