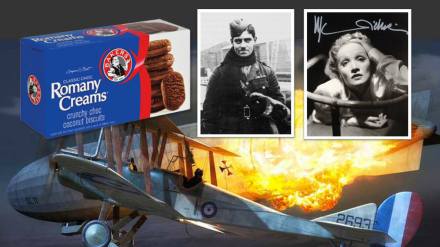 Grab your packet of Romany Creams from the pantry, bite into South Africa’s top-selling chocolate biscuit then settle down and to read some very rich South African World War 1 history.  History is often connected by remarkable ‘golden threads’ and this one takes you on a wonderful journey – all the way from shooting down Zeppelin’s bombing England to your favourite tea time ‘choccy biccy’.

Our story starts with a young South African, Ian Vernon Pyott.  Ian was the son of a Scotsman named John Pyott. John, was born in Dundee, Scotland and was a baker’s apprentice at aged 10.  Due to ill-health, John was advised to move to a better climate – so he packed off to Cape Town, South Africa and in 1880 he moved to Port Elizabeth where he manufactured sweets, cakes and jams before later moving into bread and biscuits. On 1 December 1900, Pyott converted his business into a limited liability company and named it “Pyott Limited”.  Highly successful, between 1898 and 1924, the Company was to receive no fewer than 70 medals at various exhibitions across the country 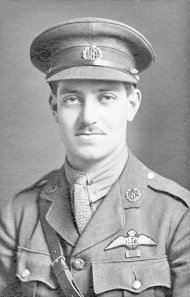 At the outbreak of hostilities which was to become World War 1, Ian Pyott returned to England in February 1916, enlisting in the Machine Gun Corps ‘MGC (Tanks)’. He transferred into the Royal Flying Corps (RFC) three months later in June, after attending flying school, he was posted to 36 Squadron’s ‘A’ Flight, based at Seaton Carew and assigned to fly a two-seater Royal Aircraft Factory BE 2c, No 2738 biplane.

Little did he know that in a couple of months he was about to become one of the heroes of the war.  He was about to meet a German Zeppelin airship on a high altitude night bombing raid, November 27, 1916, designated number L-34.

Two groups of Zeppelin airships set out from Germany to bomb England that fateful night, with the first group of five ships crossed into England near Scarborough while the second group of four flew toward the Tyne River mouth.

Zeppelin L-34 was massive, 148 metres long and a diameter of about 15 meters (on average).

Lt. Ian Pyott was flying out of Seaton Carew aerodrome, he was on his second patrol of the night. Tasked with looking for Zeppelin airships and destroying them, he took off at 10.30pm and although his BE 2C normally carried an observer he flew solo this time, this  weight saving allowed him more fuel and therefore more flying time. 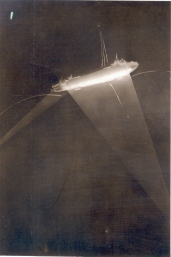 L-34 crossed the coastline into England in the neighbourhood of Blackhalls, a handful of miles north of Hartlepool.  Turning Southwards towards Tees it was spotted and searchlights brought to bear on it.  Once spotted L-34 immediately started dropping bombs in an attempt to neutralise the search-lights.   In all it dropped 13 bombs near Elwick – a little village just west from West Hartlepool.  The bombing proved ineffectual with minimum damage on the ground (two cows were injured).

Now under attack from anti-aircraft fire L-34 turned seawards ​passing over the thickly populated area of West Hartlepool. At this stage Lt. Pyott had been in the air for 1 hour when he saw the Zeppelin heading in his direction.

He reported that he was at 9800 feet and the Zeppelin was a couple of hundred feet below him, he attacked the Zeppelin at right angles to the middle of the airship, firing all the way and then flying underneath it. The airship turned east and Pyott and the Zepplin’s machine gunners dueled for about 5 more miles.  Eventually Pyott got some tracer rounds into left side of the Zepplin’s envelope and the Zepplin was rapidly engulfed in frames.  On fire, it continued east over Hartlepool, broke in half and plunged nose first into the Trees river mouth.

The virtually instantaneous combustion of 45,000 cubic metres of hydrogen on board used to inflate the airship ensured there were no survivors, only two bodies were found, the rest sadly incinerated or lost. 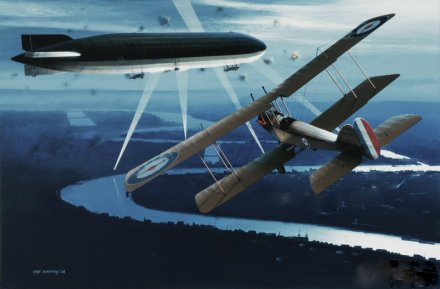 Shooting down a Zeppelin was a very big deal in World War 1, they were heavily armed, flew at incredibly high altitudes for the day and very formidable.  When Pyott landed, all the members of his base ran out to cheer him, he promptly collapsed, not due to injury, but because he was frozen stiff from fighting at such a high altitude.  They took him from the cockpit and carried him aloft on their shoulders in victory, taking him off to warm up no doubt.

Following the victory Ian Pyott was to become a national hero, wined and dined by the British elite.

Lt. Ian Pyott besides the BE 2c he was piloting when he shot down Zeppelin L34

Just over a week later, 15th December 1916, it was announced in the press that Pyott had been awarded a ‘Companion of the Distinguished Service Order’ (DSO), in part his citation read “in recognition of conspicuous gallantry and devotion to duty connection with the destruction of an Enemy Airship”.

Pyott was also promptly promoted to Captain. His proud father, the Bakery owner of Pyotts Limited in Port Elizabeth, sailed from South Africa to be present when King George V presented Capt. I.V. Pyott his DSO at Buckingham Palace. 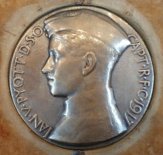 Such a big deal was made of this victory, that a special commemorative coin was even stamped to celebrate Capt. Pyott’s actions and resultant DSO.  Zeppelins were so feared by the British public they were branded ‘Baby Killers’ as the bombing of civilians carried with it such a public outrage. The commemorative medal carried Capt Ian Pyott’s profile, the year and the letters DSO, it was presented to him at Hendon Aerodrome in England by none other than General Jan Smuts.

But there was more to come from this very brave South African. He was again Mentioned in Despatches (London Gazette 25 January 1917), whilst subsequently serving with No 55 Squadron on the Western Front. He also claimed another air victory on 23 April 1917 while returning from a bombing raid, a formation from No 55 Squadron was attacked by nine hostile aircraft that dived upon them. Pyott and his observer, 2nd Lt A D Taylor, in DH4 A2147, claimed an German Albatros scout plane over Boue. 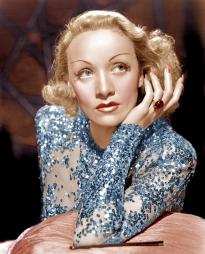 So where does the Hollywood Superstar actress and singer, Marlene Dietrich, fit into all of this?  Simply put the Commander of Zeppelin L-34 on that fateful night in September 1916, was Marlene’s uncle.

Kapitanleutnant Max Dietrich commanded Zeppelins in his short career, and was regarded as a particularly experienced commander, in all he had a total of 41 sorties in Zeppelins.  Because only two bodies were recovered from L-34, Marlene and her family lived for a little time in the hope that Max Dietrich could somehow have survived.

She said of the incident,

“We knew the Zeppelins had gone out on an errand of war, but we did not know their destination. My uncle never came back. My aunt was broken-hearted, but she would not believe her husband had really gone. She insisted that he would come back. But the years passed, and there was no news. At last she lost hope and bowed to the hand of fate. It is very sad but of course, in Ger­many my Uncle Max was mourned as a hero. He gave his life for his country”.

Marlene Dietrich, was born in Berlin and came from a strong military family. She was a Hollywood superstar actress and singer who held both German and American citizenship.  Her performance as Lola-Lola in The Blue Angel (1930) brought her international fame. Marlene Dietrich starred in many Hollywood films, significantly Morocco (1930), Shanghai Express (1932), and Desire (1936).

During World War 2, she became the ‘darling’ for both British and German troops, whilst holding this rather unique position she recorded a popular German love song by Lale Andersen called ‘Lili Marleen’ in English, it was done as a morale boost for American, British and Commonwealth troops and it became an instant hit. 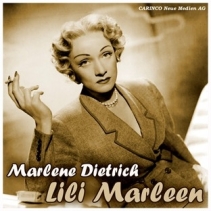 Especially for the South Africans, The song was published in South Africa in a wartime leaflet, with an anonymous English translation, as ‘Lili Marleen: The Theme Song of the Eighth Army and the South African 6th Armoured Division’ (quite ironically).

So how do Romany creams fit into this story?  Well, after the war our hero Capt. Ian Pyott returned to South Africa and took up a position in his Dad’s bakery business.

John Pyott died in 1947. His other son, Robert, became Chairman and held this position until his death in 1964. During this period, the decision was made to concentrate solely on biscuits and from October 1949, Pyott Limited thus specialised, enabling it to increase its biscuit range even further. Following Robert Pyott’s death, his brother, our Zeppelin shooting hero, Ian Pyott, was appointed to the position of Chairman and Managing Director.

The early 50s saw the beginning of the fight for market share between the three major competitors in the biscuit industry – Bakers, Baumanns and Pyotts.

Under Ian Pyott, in mid 1965, Pyott Limited collaborated with Cadbury’s Chocolates in Port Elizabeth to produce a chocolate variation of a traditional English treat known as “Gypsy creams”, which consisted of two round-topped biscuits sandwiched together with a creamy white filling. Gypsy Creams were not a very big seller for any of the British manufacturers.

Innovative as ever, the biscuit part was shaped the same as for “Gypsy Creams”, but the biscuit part (referred to as the shell) was improved and it was sandwiched with a chocolate filling instead, no doubt provided by Cadbury’s Chocolates.

The line immediately proved a winner.  They chose the name “Romany” to carry the ‘Gypsy’ connotation across from Gypsy Creams (named after the Romany travelling community).

Bakers Ltd then made a competitive product and called it Tuscany Creams, but it was Pyott’s Romany Creams that really held the market.

In 1969, Ian Pyott, was now getting old and he resigned from the position of Managing Director of Pyott Limited. He died shortly afterward in 1972 whilst the company was been sold to Nabisco Inc.  Many buy-outs and takeovers later, what was Pyott Limited found itself part of the Anglovaal Industries Group. 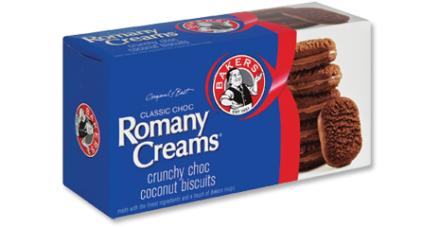 Today, the familiar Pyott’s logo on Romany Creams has been replaced with their old competitor’s logo – the Baker’s logo. The range of flavours has expanded and the packaging design has changed, but the ‘original’ flavour chocolate Romany Creams developed by one dapper, Zeppelin shooting South African fighter pilot and war hero, Capt. Ian Pyott DSO, are still the best seller.

I’ll bet the modern Marketing Managers at National Brands have little to no idea of the heritage this product has. Wouldn’t it be nice, if in the centenary of the end of WW1, that a special commemorative packaging be designed to Capt. Ian Pyott DSO and his legacy re-presented to a South African public largely unaware of the WW1 heroes this country has, and what they have given to the country.

I hope you have munched your way through the entire packet of Romany Creams by now and richer in chocolate and sugar no doubt, but you also are much richer in the knowledge now that you bitten into the type of fantastic journey South African military history has to offer. History that often lies so hidden away because seismic political events in South Africa have over-taken it.  Think of it as a ‘secret filling’ that will make for an interesting titbit to impress your friends with, next time the Romany Creams appear on a coffee table.

Written and researched by Peter Dickens

Enjoyed this, have a look at another famous South African military history treat, the Hertzoggie vs. the Smutsie.

My sincere thanks to Sandy Evan Hanes for pointing out this interesting golden thread to me.  References: Wikipedia, Shooting Down of Zeppelin L-34 by Ivor Markman.   On-line discussion forums.  South African Legion Facebook group forum.