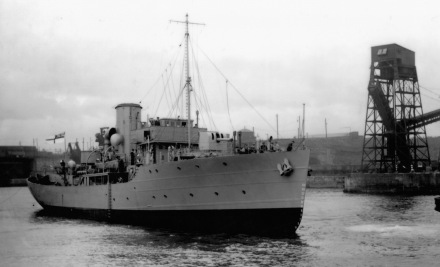 HMS Hollyhock was commissioned on 19th August, 1940 and finished on November 19 1940. The Hollyhock was a Flower Class Corvette.  She originally served as escort protection in the Atlantic as part of EG3 (3rd Escort Group) Western Approaches Command Fleet.

Between 11th & 16th November 1941, HMS Hollyhock escorted convoy ST8 to Takoradi, she then returned to Freetown between 17th & 22nd November. On the 27th, she left Freetown escorting a large troop convoy to Simonstown along with HMS Royal Sovereign. While she was in Simonstown, she had some defects rectified, and had a boiler clean.

It was at this time (7th December 1941) that Japan entered the war with the bombing of Pearl Harbour in the US State of Hawaii. This caused many problems and changes, one of which was the transfer of HMS Hollyhock to the Eastern Fleet (East Indies Fleet) to bolster the fleet against Japanese aggression and expansion.

With Japan’s entry into the war, and especially after the fall of Singapore, Ceylon (now Sri Lanka) became a front-line British base. The Royal Navy’s East Indies Station and Eastern Fleet was moved to Colombo and Trincomalee.

Admiral Sir James Somerville was appointed as the commander of the British Eastern Fleet, and he decided to withdraw main component the fleet to Addu Atoll in the Maldives, leaving a small force to defend Ceylon (Sri Lanka) consisting of an aircraft carrier, the HMS Hermes, two heavy cruisers – the HMS Cornwall and HMS Dorsetshire, one Australian Destroyer the HMSAS Vampire and the flower class corvette, our feature today, the HMS Hollyhock.

The Royal Navy’s own ‘Pearl Harbour’

The Imperial Japanese Navy, in much the same way and with the same objectives that were used at Pearl Harbour against the American fleet planned a decisive attack of the British Eastern Fleet to end their presence in the North Indian and Pacific oceans.  Unaware that the main body of the British fleet had moved to the Maldives, they focused their plan on Colombo (the commercial capital of modern-day Sri Lanka).

The planned Japanese attack was to become collectively known as the Easter Sunday Raid and the Japanese fleet comprised five aircraft carriers plus supporting ships under the command of Admiral Chuichi Nagumo.

In an almost exact copy of the raid on the American fleet at Peal Harbour (as if no learnings were made by the Allies), on 4 April 1942, the Japanese fleet was located by a Canadian PBY Calatina aircraft, the Catalina radioed the position of the Japanese Fleet to The British Eastern Fleet which alerted the British to the impending attack before it was shot down by six Japanese Zero fighters from the carrier Hiryu,

However, despite the warning Nagumo’s air strike on Colombo the next day, Easter Sunday 5th April 1942 they did manage to achieved near-complete surprise (Pearl Harbour was also attacked on a weekend). The British Radar installations were not operating, they were shut down for routine maintenance (another parallel with the attack on Peal Harbour).

The first attack wave of Japanese planes took off in pre-dawn darkness (30 minutes before sunrise) from the aircraft carriers Akagi, Hiryu and Soryu, moving about 200 miles south of Sri Lanka. The first attack wave of 36 fighters, 54 dive bombers, and 90 level bombers was led by Captain Mitsuo Fuchida the same officer who led the air attack on Pearl Harbour.

The Heavy Cruisers, HMS Cornwall and HMS Dorsetshire set out in pursuit of the Japanese. On 5 April 1942, the two cruisers were sighted by a spotter plane from the Japanese cruiser Tone about 200 miles (370 km) southwest of Ceylon. A wave of  Japanese dive bombers led by Lieutenant Commander Egusa took off from Japanese carriers to attack Cornwall and Dorsetshire, 320 km (170 nmi; 200 mi) southwest of Ceylon, and sank the two ships.

On 9 April, the Japanese focussed their attack on the harbour at Trincomalee and the British ships off Batticaloa. The HMS Hermes left the Royal Naval Base of Trincomalee, Ceylon escorted by the Australian Destroyer HMAS Vampire (on loan to the Royal Navy), and along with the HMS Hollyhock they were tasked with protecting merchant fleet tankers.

While sailing south off Batticaloa on the East Coast of Ceylon, this British flotilla was also attacked by the Japanese Carrier-Borne dive-bombers from the Imperial Japanese Task Force now in the process of attacking the Naval Base at Trincomalee.

After the Japanese aircraft broke off the attack on the HMS Hermes, those aboard the Hermes’ escort, the Australian ship HMSAS Vampire, thought they had been spared. However, the aircraft had returned to the carriers to rearm, and on their return bombed the destroyer heavily. HMAS Vampire shot down at least one aircraft before breaking in half and sinking. Despite the ferocity of the attack, Vampire‘s commanding officer and eight sailors were the only fatalities.

The Sinking of HMS Hollyhock

Just past midday, the tanker the Hollyhock was escorting, the RFA Athelstane was dive bombed by 5 Japanese aircraft, each dropping one bomb. The tanker ship was hit several times and disabled and the crew abandoned ship.

At the same time an attack by Japanese dive bombers commenced on HMS Hollyhock, the first bomb exploded on the starboard side about 25 feet from the Hollyhock bursting  side fuel tanks and putting the number 2 Boiler out of action.

The second bomb exploded 30-40 yards from starboard side of ship between the bridge and the Hollyhock’s 2 pounder gun.  The HMS Hollyhock then started to close on RFA Athelstane to come to its assistance.

Barely a minute later a fourth bomb dropped on the Hollyhock then burst amidships, and his sealed the fate of the ship as it hit her Magazine and boilers causing a massive explosion. The whole ship blew apart and disintegrated, sinking within just 30-40 seconds.

This attack and sudden massive explosion which sank the Hollyhock is best described by Captain Moore of the RFA Athelstane, who had survived the attack on his own ship and witnessed the attack on the Hollyhock, he simply remarked that attack on both their ships had lasted about 5 minutes and the final bomb to hit the Hollyhock probably hit her magazine and she “immediately blew up, disintegrating, and sank”.

Given the ferocity of the final moments of the Hollyhock it is a sheer miracle that there were any survivors at all, however of the ships compliment a lucky few, 14 men in all survived.  The rest of the ships personnel, 49 souls in total were lost, including 5 South African Naval Force volunteers.

Controversy on the sinking of HMS Hollyhock

Noted in the accounts is lack of adequate Anti Aircraft firepower on the HMS Hollyhock to defend herself from an air attack.  In fact the ships main complement of Anti-Aircraft  guns were removed from Hollyhock and transferred to the Aster prior to her leaving Colombo’s port.  This was noted in the Eastern Fleet War Diary, simply put the HMS Hollyhock was at sea without her full armament, and stood virtually no chance at all from a concentrated air attack – which unfortunately proved to be the case. 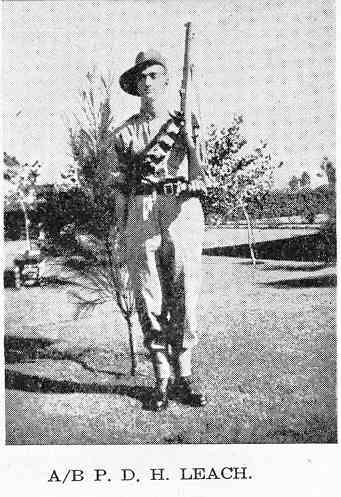 May their sacrifice never be forgotten.

Take the time to watch this short video on the history and discovery of what is believed to be the wreck of the HMS Hollyhock compiled by ‘Dive Sri Lanka’ at a site 42 meters deep.

Written and Researched by Peter Dickens.  Primary Reference: On line website, video and images to commemorate Alfred John Wickett, 24, who died on 9th April, 1942, when the Flower Class Corvette HMS Hollyhock was attacked and sunk by Japanese dive bombers when on active service in the Indian Ocean.

A great thanks to Jonathan Wickett, whose twenty year research into the sinking of the Hollyhock has resulted in the website http://www.hmshollyhock.com from which information and images were sourced for this article.

7 thoughts on ““She immediately blew up”; Recounting South African sacrifice on the HMS Hollyhock”