“Gold may shine, but it has no true light” is a quote by Kristian Goldmund Aumann to mean that glittering gold is false when compared to the importance of spiritual light, and nothing is more true in this statement when reviewing the sacrifice and loss on the HMS Edinburgh – it is the subject of a multi-million dollar treasure hunt for gold and the subject of supreme wartime sacrifice, including South African life.

The HMS Edinburgh was a very heavily armed and armoured Town Class light cruiser of the Royal Navy, she saw extensive wartime service during World War 2, including the hunt for the German Battleship Bismarck, however our story picks up from August 1941 when she  escorted convoy WS10 to Simonstown in South Africa.

After some maintenance work in South Africa and taking on some South African Naval personnel the HMS Edinburgh sailed to Malta as part of Operation Halberd. She returned to Gibraltar shortly afterwards, departing from there on 1 October 1941, with supplies and prisoners of war aboard, and bound for the Clyde in Scotland. 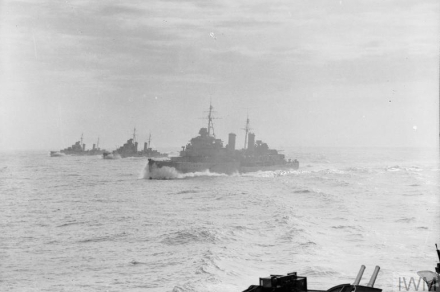 The cruisers HMS EDINBURGH, HMS HERMIONE, and HMS EURYALUS, steaming in line abreast whilst they escort a convoy (Operation HALBERD – convoy not visible).

After repairs at Faslane she joined the Home Fleet on Iceland Forces Patrol duties and from November 1941 to April 1942 provided cover to Arctic convoys bringing aid to the Soviet Union (Russia).

On 6 April, she left Scapa Flow to escort convoy PQ14 to Murmansk. Of the 24 ships in PQ14, 16 were forced by unseasonal ice and bad weather to return to Iceland, and another was sunk by a U-boat. HMS Edinburgh and the remaining seven vessels arrived in Murmansk on 19 April.

Here she took on gold bullion to take back to the United Kingdom, a lot of it, 4.5-long-ton (4,570 kg). The consignment, which had a value of about £1.5 million sterling in 1942 (adjusted for inflation to 2017 pounds, £63,047,983), was a partial payment by the Soviet Union  for the supplies of war material and military equipment from the Western Allies. In total the ship had 465 gold ingots in 93 wooden boxes stored in the bomb-room.

On the return leg from Murmansk, HMS Edinburgh was the flagship of Rear-Admiral Stuart Bonham Carter who was commanding the escort of returning Convoy QP 11 involving 17 ships.

On 30 April 1942, a German Submarine U-456 (under the command of Kapitanleutnant  Max-Martin Teichert) on her 5th patrol spotted the HMS Edinburgh and engaged her by firing a torpedo into her starboard side, hitting her just fore of the bomb room, which stored all the gold.

The ship began to list heavily, but the crew reacted quickly and competently by closing watertight bulkheads, which prevented the ship from sinking immediately. Soon after, U-456 put a second torpedo into HMS Edinburgh‘s stern, wrecking her steering equipment and crippling her.

A photograph clearly showing the severe damage to the stern of HMS EDINBURGH caused by the German torpedo and her listing to port.

HMS Edinburgh was then taken in tow by escorting British ships, and tried to return to Murmansk along with the destroyers HMS Foresight and HMS Forester and four minesweepers. Along the way she was hounded constantly by German torpedo bombers. On 2 May, as she progressed at a snail’s pace under tow and her own power, she was attacked off Bear Island by three large German destroyers – Z7, Z24 and Z25. HMS Edinburgh was cast off the tow, so that she started to sail in circles, fighting off the assault in a fierce sea battle , the Edinburgh even managed to cause such damage to one of the German Destroyers – Z7 Hermann Schoemann that it had to scuttled by her crew and sank.

HMS Edinburgh’s escorts eventually drove off Z24 and Z25, but she was struck by a torpedo amidships, exactly opposite the first torpedo hit from U-456. She was now held together only by the deck plating and keel, which was likely to fail at any time, so the crew abandoned ship. HMS Gossamer took off 440 men and HMS Harrier about 400. Two officers and 56 other ranks on HMS Edinburgh were killed in the attacks.

HMS Edinburgh was doomed at this stage and a last resort the British used HMS Harrier tried to scuttle HMS Edinburgh with 4 inch gunfire, but 20 shots did not sink her. Depth charges dropped alongside also failed. Finally, in a sad farewell to a very strong fighting ship HMS Foresight sank HMS Edinburgh with her last torpedo (the others having been expended against the German destroyers).

In an ironic twist of history, HMS Foresight met a similar fate as HMS Edinburgh when she was torpedoed by Italian aircraft whilst on escort duty and had to be sunk by HMS Tartar after breaking her tow.

The fate of the German submarine and warships involved in the sinking of HMS Edinburgh, U-456 was eventually sunk on the 12th May 1943 whilst hunting convoys off Ireland she was spotted by a RAF Liberator, she dived but was hit by a ‘new’ American Fido acoustic homing torpedo dropped by the Liberator. U-456 was badly damaged and forced to re-surface. On the following day she was depth charged and sunk on 12 May 1943 by HMS Opportune.

Z24 was a Type 1936 German destroyer and was attacked and completely destroyed and sunk by the Royal Air Force on the 25th August 1944 off Le Verdon.  Z25, also a Type 1936 survived the war and was taken over by the British on the 6th January 1946.

Keith Jessop with a gold bar from the HMS Edinburgh

After the war, the wreck of the HMS Edinburgh was classified as a war grave, making salvage operations for the gold which sunk with her difficult.  However ever anxious the British government pressed to recover the gold.  Ostensibly not just because of the value but also because of unscrupulous salvaging operations and because of tensions with the Soviet Union during the Cold War and fear they might salvage it all.

In the early 1980s, Jessop Marine, with the support of Wharton Williams Ltd (a leading global diving company) and OSA (a specialist shipping company) won a contract from the British government to attempt a recovery.  The recovered gold would be divided up between the salvage consortium, the British Government and the Soviet Government.

Cutting into the wreck by divers to get to the bomb room was deemed more appropriate for a war grave than the traditional ‘smash and grab’ explosives-oriented methods. The consortium of specialist companies for the project was then formed on the proviso the recovery be done with dignity.

In April 1981, the wreck was discovered the wreck at about 400 kilometres NNE of the Soviet coast at the Kola Inlet at a very deep 245 metres (800 ft).  The wreck was mapped and on the 30th August 1981 the diving operation began in earnest, by mid September, 431 of 465 ingots had been recovered.

At the time, the 80’s, the haul was worth in excess of £40,000,000 sterling  (£63,000,000 by today’s standard). This bullion recovery project created a World Record in deep diving which stands to this day. A further 29 bars were brought up in 1986 by the Consortium, bringing the total to 460, leaving five unaccounted for.  They also recovered the all important ship’s bell. It was billed as the ‘Salvage of the Century’ and made a rich man the famous treasure hunter Keith Jessop and others, including some Southern African divers on the project.

However, some full credit to these divers, when reaching the wreck for the first time the lead diver on his own accord conducted two minutes of silence underwater in recognition of the war dead, despite the extreme dangers of saturation ‘deep bell’ diving.  They also preformed a wreath laying service at sea on completing the salvage.

The BBC captured this story in a documentary called ‘Gold from the Deep – The Salvage of the Century,’ its well worth a view and contains some outstanding eye-witness accounts of the HMS Edinburgh’s crew.

“Gold may shine, but it has no true light”

Now, we come back to the quote, “Gold may shine, but has no true light”.  The true light, the true treasure lost were the lives of the 58 Allied personnel lost on HMS Edinburgh in her desperate fight to bring convoys of equipment, food and aid to the Soviet Union in a very desperate time as the Russians soaked up the biggest cost in blood of the war fighting Nazi Germany,  the later Cold War of the 1980’s and gold booty aside, we remember these South African’s whose true light was extinguished in this fight:

4 thoughts on ““Gold may shine; but it has no true light” South African sacrifice on the HMS Edinburgh”