Here’s something on the SADF/SANDF’s John Chard Decoration and Medal series for long service in the Citizen Force, many who even hold the medal may not even know.  But did you know, the John Chard Decoration and John Chard Medal Series was instituted by Queen Elizabeth II in 1952 (just two short months after she became Queen) and it is the last medal to issued by a British monarch and worn by members in all four South African military formations – Army, Navy, Air Force and Medical Service.

The John Chard Medal was instituted by Queen Elizabeth II on 6 April 1952, during the Tercentenary Jan van Riebeeck Festival, to replace the South African Union Defence Force’s Efficiency Medal and the Air Efficiency Award which had been awarded to members of the Citizen Force between 1939 and 1952.  The John Chard medal series is a ‘service medal’ awarded for pre-determined tenure of service to the statuate South African defence forces.

The John Chard medal and decoration was named after John Chard VC, the lieutenant in command of the supply depot at Rorke’s Drift during the Anglo-Zulu War, when it was attacked by Zulus on the 22nd of January 1879.

For anyone whose seen the landmark movie ‘Zulu’, Lt. John Chard is played by Stanley Baker.  Baker stars alongside Michael Caine who plays Lt. Gonville Bromhead.

The two officers, John Chard and Gonville Bromhead both earned Victoria Crosses’ along with nine others in defending Rorke’s Drift against a Zulu army attack.  This is the largest tally of Victoria Crosses (the ultimate British award for Valour) from one single engagement, per head this battle has the highest concentration of bravery awards and decorations ever received (11 Victoria Crosses, one VC Mentioned in Dispatches and 4 Distinguished Conduct Medals).  There were only just over 150 British and colonial troops who successfully defended the missionary and crossing at Rorke’s Drift against an intense assault by 3,000 to 4,000 Zulu warriors. It is an act that has never been repeated, and likely never to happen again in future.

So why so many Victoria Crosses for so few defenders?  Well, simply put , a significant part of the British expeditionary force had been annihilated at the Battle of Isandlwana on the same day 22 January 1879, and the little missionary and crossing at Rorke’s Drift was the last line of defence should the Zulu Army have built on its victory at Isandlwana and invaded the British colony.  The Natal Colony would have been for the most part left defenceless whilst Lord Chemsford and the remaining bulk of British forces searched for the Zulu army in the Zulu Kingdom itself.  The action of these ‘few’ at Rorke’s Drift literally saved an entire British colony.

The Battle of Isandlwana was an embarrassing defeat for the British. The British Empire suffered its worst defeat against an indigenous foe with vastly inferior military technology. The site today is most interesting, because of the hard ground the British were unable to bury their dead, so they built stone cairns where they fell to cover them instead. These cairns, painted white – are a grizzly reminder of the calamity which took place there and literally map and bring the battlefield into perspective.

So why is John Chard singled out?

John Chard was a lieutenant in the Royal Engineers who was busy building a pontoon bridge across the river, when he received the news that Isandlwana was under fierce attack.

Leaving his work, Chard rushed to the mission station at Rorke’s Drift, here he calmly set about building defensive walls around the hospital using bags of grain and biscuit tins.  Chard took up overall Command to defend the missionary buildings and it was his strategy and tactics during the battle that literally saved the day and helped to avoid complete annihilation of his small force of wounded and sick men, and a sprinkling of some very scared and bewildered Natal Native Continent soldiers.  The redoubt he ordered be built was key to the British success on the day.

For his role in the heroic defence of Rorke’s Drift, Queen Victoria awarded the Victoria Cross to him, he also received a promotion to captain (he would retire a Colonel).  To get a modern perspective on this in living image, this compilation from the movie ‘Zulu’ captures the destruction at Isandlwana and the fierce fighting in defending Rorke’s Drift, take the short time to watch it – look out for the concentrated volley fire and the use of the redoubt – a tactic missing from the Battle of Isaldlwana but used to absolute effect at Rorke’s Drift.

The citation for Chard’s and Bromhead’s Victoria Crosses says everything:

THE Queen has been graciously pleased to signify Her intention to confer the decoration of the Victoria Cross on the undermentioned Officers and Soldiers of Her Majesty’s Army, whose claims have been submitted for Her Majesty’s approval, for their gallant conduct in the defence of Rorke’s Drift, on the occasion of the attack by the Zulus, as recorded against their names, viz.:—

For their gallant conduct at the defence of Rorke’s Drift, on the occasion of the attack by the Zulus on the 22nd and 23rd  January, 1879.

The Lieutenant-General commanding the troops reports that, had it not been for the fine example and excellent behaviour of these two Officers under the most trying circumstances, the defence of Rorke’s Drift post would not have been conducted with that intelligence and tenacity which so essentially characterised it.

The Lieutenant-General adds, that its success must, in a great degree, be attributable to the two young Officers who exercised the Chief Command on the occasion in question.

Painting by Alphonse de Neuville – The defence of Rorke’s Drift

Even we learn something new everyday, what makes this surprising is that a medal issued by a British Monarch remained in the service of The South African Defence Force for so long, especially after it was reformatted after the National Party took South Africa out of the British Commonwealth and they embarked on a campaign to change the South African military emblems, insignia and medals and rid the SADF of anything “British” (especially the Queen’s crown which now had to go).

In many instances these changes where resisted and a number of civilian force “Regiments” where able to hold onto some of their British heritage – however the medal sets where all changed and new medals instituted, except the John Chard Service medal series which survived the changes. 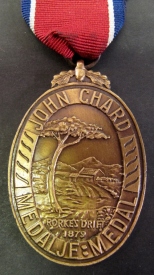 The medal was awarded to all ranks of the Citizen Force for twelve years efficient service, not necessarily continuous. After a further eight years a recipient could qualify for the award of the John Chard Decoration (JCD).

This was later changed in 1986 to allow Citizen Force members to earn the John Chard Medal after ten years service, not necessarily continuous and the John Chard Decoration after twenty years.

The John Chard medal comes in heavy brass and the John Chard  Decoration comes in heavy silver, and is not only beautiful to handle, but also fairly valuable. The early medals and awards bore the royal cypher on the rear, while the later ones bore the coat of arms of the Republic of South Africa.

The John Chard decoration/medal series continued in the SANDF from 1994, but was finally discontinued in 2003 and replaced by the SANDF’s new long service medals. This was done when the new African National Congress (ANC) political dispensation did a sweeping change to all military emblems and insignia to rid it of anything the ‘nationalists’ or ‘colonialists’ instituted (and lets not pull any politically correct punches – to the Zulu nation Rorke’s Drift is symbolic of British imperialist aggression, land grabbing and expansion into an independent Zulu Kingdom).

The John Chard medal is now superseded by the SANDF’s Medaljie sir Troue Diens and the Emblem for Reserve Force Service.  The John Chard medal (and decoration) is still recognised as an ‘official’ medal issued for a statutory force member, and is still worn very proudly in the South African Reserve by those who have received it.

We can’t but think that each time a new political dispensation brings in its particular sweeping changes into the defence force, something by way of tradition gets lost.

Photo of General Roy Andersen, the head of The South African Reserve by Cornelius Bezuidenhout, notice the John Chard decoration (with bar) and John Chard medal at the far right hand end of his medal set when looking left to right.