Ever wondered why South Africa has two separate ‘Boy/Girl Scout’ youth movements, one based on the International Scout movement started by Robert Baden-Powell called the ‘Scouts’ and one called ‘Voortrekkers’ primarily aimed at Afrikaner youth only?

They are both great movements aimed at equipping the youth with life skills and a sense of the ‘outdoors’.  So why the need for a separate Afrikaner one?  Well, it all goes back to The 2nd Anglo-Boer War, and the inspiration for the International Boy Scout movement.

So how did this come about? 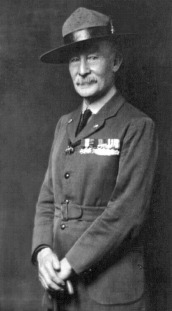 The start of the Second Boer War in South Africa in 1899, came when the Boer’s declared war on the British and invaded the British Colonies of Natal and the Cape whilst the colonies were relatively weakly defended.

Much sabre rattling over British miner’s citizen rights in the Transvaal and Imperial Expansionism had preceded the invasion and as the clouds of war began to build, without a full expeditionary force or the ‘Causus Belle’ to raise one, the British compromised by building up local regiments of Mounted Rifles made up of citiz­ens in their colonies of Natal and the Cape.  One such commander up for this task, and who was already in South Africa, with experience fighting Zulu and Matabele wars was a certain ‘Colonel Robert Baden-Powell’.

Initially  instructed to maintain a mobile mounted force on the frontier with the Boer Republics. Baden-Powell and his officers had three tasks: to resist any Boer invasion of the Natal Colony, and in the event of an invasion to draw the Boers away from the coastal ports to enable the relieving British expeditionary force to land  and finally by show of force to discourage the local Afrikaners in the Cape and Natal from supporting the Boers of the Orange Free State and Transvaal (ZAR) Republics.

More than just maintaining a mobile mounted citizen force, Baden-Powell used initiative and also amassed stores and a garrison at Mafeking. While engaged in this, he and much of his intended mobile force was at Mafeking when the town was surrounded and laid to siege by a Boer army.

Mafeking was located right on the boundary where the British Cape Colony and the Boer Transvaal met, it was a ‘frontier town’ and the most remote British town, it could not be more further flung from its capital in Cape Town. It was however still a ‘British’ town and during this Siege of Mafeking, Colonel Baden-Powell and his 2,000 men defended the town as best they could from the 8,000 Boers who continued to shell the town and tried to starve and bomb it into a surrender.

Whilst Baden-Powell and his small force defended Mafeking and sat out the bombardment and starvation, the British amassed their Expeditionary Force destined from the United Kingdom via Cape Town – to take back their besieged towns of Kimberley and Mafeking in the Cape Colony and Ladysmith in the Natal Colony.

This horrendous siege of Mafeking’s civilians and military garrison lasted 217 days from October 1899 to May 1900, and turned Robert Baden-Powell into a national British hero.

Because of the shortage of military manpower in Mafeking, Baden-Powell was quick to put 18 volunteer British adolescents in the Mafeking Cadet Corps to use.  These cadets were used during the siege to support the British troops defending Mafeking.  They were tasked to carry messages around the town and to out­lying fortifications.  They were also used to help with the wounded and act as lookouts, warn­ing the townspeople when the Boer siege guns were aimed and fired at different parts of the town.

These tasks freed up adult men for military duties and kept these young cadets occupied during the Siege. The boys took their new job with pride, instead of running around collecting used or parts of shells, they now actually participated in the war, and were soon a recognised part of the town defences. The corps was quickly grown from 18 to 38 volunteer white boys below ‘fighting’ age (some sources indicate 40 Cadets).

Their leader was the 13-year-old Warner Goodyear, who became their Sergeant-Major. They were given khaki uniforms and a wide-brimmed hat which they wore with one side turned up (known as a ‘slouch’ hat), and a Glengarry cap, and the towns people easily identified them and often commented on their smartness. 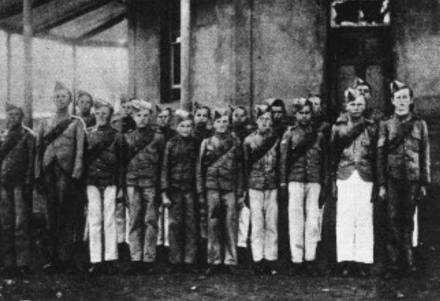 At first the Cadets used donkeys for mobility, but as the siege ran on, food became scarce and the donkeys became dinner. From then on, the cadets used bicycles instead, often cycling in hazardous conditions as they delivered messages whilst under heavy artillery fire. In one famous story, Baden-Powell related the following conversation with one of the cadets: I said to one of these boys on one occasion, when he came in through rather a heavy fire: ‘You will get hit one of these days riding about like that when shells are flying’. And he replied ‘I pedal so quick, Sir, they’d never catch me’.

The town produced its own postage stamps, known as “Mafeking Blues”, for postage during the siege. Since all the letters were delivered by the Cadets, the town even issued a new stamp in honour of them, the new design showed the leader of the Cadet Corps, Warner Goodyear,  seated on his bicycle. After the siege, the special Mafeking stamps became collectors’ items all over the British Empire.

The Mafeking stamps were unusual among the stamps of the British Empire at that time, because they did not depict the monarch. Warner Goodyear, died in 1912 in a sporting accident at the early age of 26. 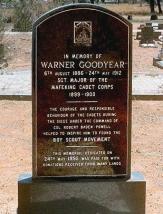 Frankie Brown, a 9-year-old boy, was killed by a shell during the siege, and is sometimes claimed as a cadet casualty, although it is unlikely that he was a cadet. The youngest cadets on the nominal roll were aged 11.

The siege was finally lifted on 17 May 1900, when a flying column of some 2,000 British soldiers, including many South African volunteers from Kimberley, commanded by Colonel B. T. Mahon of the army of Lord Roberts, relieved the town after fighting their way in. Among the relieving force was Major Baden Baden-Powell, brother of the town garrison commander Colonel Robert Baden-Powell.

At the end of the siege, 24 cadets were awarded the Defence of Mafeking bar to the Queen’s South Africa Medal.

Inspiration to start the Scouts

The Mafeking Cadet Corps, published in the book “Petticoat In Mafeking. The Siege Letters of Ada Cock “There are 45 Cadets in the Image, taken some time after the siege had ended.

He had not however turned this thinking to include ‘Boys’, however during the siege of Mafeking  he was sufficiently impressed by the Mafeking Cadets, with both the courage and the equanimity with which they performed their tasks, and he was to use them later as an object lesson in the first chapter of Scouting for Boys.

After the 2nd Anglo Boer War ended in May 1902, Baden-Powell returned to the United Kingdom in 1903 as a national hero.  He was familiar with a organis­ation called The Boys’ Brigade, founded by his friend William Alexander Smith back in 1883.  Members of the Boys’ Brigade were encouraged to combine drill and fun activities with Christian values.  At the same time his manual on military scouting ‘Aids to Scouting’ was selling quite well (no doubt off the back of his new found popularity) and was being used in Britain by teachers and adult leaders of youth organisations.

With encouragement from William Alexander Smith, and inspired by the conduct of the boys in the Mafeking Cadet Corps Baden-Powell decided to re-write ‘Aids to Scouting’ to suit a younger market.

This final document described outdoor activities, character development, citizenship and personal fitness as the core values of boy scouts, and most important, it omitted all military content. 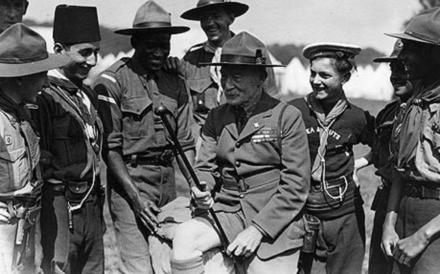 Two important events also happened in 1907. Firstly Baden-Powell went on an extensive speaking tour arranged by his publisher, Arthur Pearson, to promote the new book. He was well received wherever he travelled in Britain. Secondly Baden-Powell organised a camp on Brownsea Island in Poole Harbour Dorset to test out his ideas for a Boy Scout Movement. Only 20 lads turned up: half from local Boys’ Brigade compan­ies and half school boys whose fathers knew Baden-Powell. But in a very important sense, this camp marked the formal beg­inning of the scouting movement.

The next year, 1908, scout packs were established across the country, all following the principles laid out in Baden-Powell’s book.  The first national Scout Rally was held at Crystal Palace in 1909. By 1920, the first worldwide Scout Jamboree took place in Olympia in West Kensington, under Baden-Powell’s leadership. Soon after this event  Baden-Powell was made a Baronet, and the rest – Cubs, Scouts, Sea Scouts, Air Scouts, Girl Guides etc. is history.

Typical to South Africa, put two of us in the same room and we will come up with three political parties.  This is true when it came to the founding of the ‘Voortrekkers, the Africans equivalent scout movement.  The initial tenants of ‘Apartheid’ did not really form on how to keep Blacks and Whites apart, early Apartheid philosophy focussed on how to keep the Afrikaner and English South African youth on separate socialization trajectories, with their own respective primary and high schools, sports leagues, universities and youth movements/organisations – almost every youth institution was defined as those for the ‘English’ and those for the ‘Afrikaner’.

The original concept of a separate youth scouting movement for Afrikaners was formulated by Dr. C.F. Visser in 1913 in Bloemfontein, and early on in its formulation it was already at loggerheads with the Scout movement started by Baden-Powell.  The formation of the Voortrekkers coincided with the growth of Afrikaner nationalism in South Africa, post the 2nd Anglo Boer War.  The Nationalist were anti-British and for good reason, the British has decimated the Afrikaner ‘Boer’ peoples and sitting deeply in their consciousness then (and now) was hatred, especially fuelled by the British concentration camp system, where disease took hold of deported Boer families, killing thousands of Boer women and children during the war.

The Voortrekkers was formed as the Afrikaans-language alternative in opposition to the largely English-speaking Boy Scout movement, which had a strong and overt British heritage.  The Scout movement was equally nationalistic in its initial appeal to British youth and it carried with it a 2nd Anglo Boer war inspiration and root along with a British Boer War Commander as a founder – all of which was very much despised by the Afrikaner Nationalists.

Even initial efforts by Dr Visser to consolidate the Voortrekkers under the ‘broad church’ of the more global Boy Scout movement met with resistance – both by Afrikaner Nationalists and by the directors of the Boy Scout Movement. 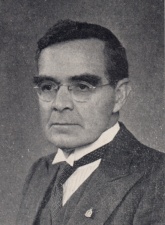 Issues arose over the differences of language, culture and history.  There were also further complications hinging upon religious declarations or beliefs, the religious tone of the Voortrekkers was more than that of the Scouting Movement programme. The values and principles of the Voortrekker organisation ran along Afrikaner Nationalism lines and this proved highly problematic as it politicised the movement. Therefore no agreement could be reached.

The Voortrekkers and Scouts continue to exist in parallel to one another in South Africa, the Voortrekkers still appealing to mainly white Afrikaans youth based on cultural assimilation and the Scouts are now a very multiracial youth movement in South Africa having now undergone some transformation to become more inclusive of communities outside of the ‘white English’ one.

Both are doing an excellent job in building youth skills in the appreciation and arts of outdoor living, basic life skills and value building – but both are going it very much in their own respective way. 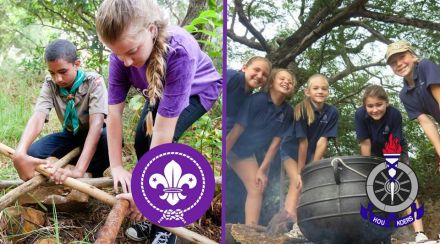 Written and Researched by Peter Dickens.  Sources and extracts include Wikipedia and The imperial War Museum.  Additional information and images gleaned from South African Scout and Voortrekker official websites.