The feature image is Major Arthur Geater’s Bristol Beaufighter which was found in Sept 2013 after being undiscovered for 69 years since it was ditched and sank.  The discovery is a story itself, but so too is Arthur’s.

Reginald Arthur Geater joined the South African Air Force (SAAF) during the Second World War and qualified as a twin-engine pilot, he also served for a long period as instructor and in 27 transport/maritime squadron, flying Venturas and Dakotas.

He was eventually sent to Italy in mid 1944 for operational service with 19 squadron, flying the rocket firing Bristol Beaufighter. During his operational service he flew mostly sorties to targets in the Balkans. Missions consisted of  rocket attacks against enemy shipping, motorised transports,  gun emplacements, buildings and rolling stock.

His operational tour was very eventful. On his very first combat sortie Arthur was shot down over the sea. He and his navigator survived the ditching and he was eventually able to returned to his squadron after a short ordeal behind enemy lines staying with locals on Greek Islands.  So what happened?

The attack and ditching

In the afternoon of September 12, 1944  Bristol Beaufighter KV930 of 19 SAAF (South African Air Force) Squadron took off from Biferno (Italy), along with three other aircraft. On his very first mission was our hero for today, Arthur Geater along with his navigator  Stan Dellow seconded from the Royal Air Force.  Their mission was a simple one, search for enemy shipping amongst the Greek Islands and destroy them.

The sortie of four SAAF Beaufighters comb an area of Greek Islands looking for German military vessels, the search are spans from Preveza in northwestern Greece, located at the mouth of the Ambracian Gulf, then across to Lefdaka Island, then over to Kefalonia island with their mission finally taking them as far as Zakynthos Island.

Late in the afternoon at approximately 17:05 hrs. they reach the northern tip of Ithaki Island and spot a German vessel, it is a “Siebel” ferry, and it was hiding from air attack in one of the fjord-like coves of the island.

The Siebel ferry was a shallow-draft catamaran landing craft operated by Germany’s Wehrmacht (Army) during World War 2. It served a variety of roles (transport, flak ship, gunboat, convoy escort, minelayer) in the Mediterranean, Baltic and Black Seas as well as along the English Channel. They were originally developed for Operation Sea Lion in 1940, the abortive German invasion of England.

The SAAF Beaufighters immediately started their attack, but were greeted with strong anti-aircraft fire from the heavily armed Siebel. Geater’s Beaufighter was hit with both engines receiving hits from multiple Anti-Aircraft rounds.  Oil and thick smoke erupted from the engines and Arthur Geater took the decision to ditch the aircraft in a controlled sea ‘landing’ before it became an uncontrolled one.

The Siebel sustained heavy damage and according to German records and was eventually beached to avoid sinking.

Remarkably an image of the attack also survives, and here you can see the German ship (ferry) that shot Arthur down from a photograph taken during the attack from the SAAF 19 Squadron Officer Commanding’s gun camera.

Geater successfully managed to ditch the aircraft and both he and the navigator climbed out the sinking Beaufighter and took to an inflatable dinghy which was on board for just such an eventuality.

Local Greek Islanders who saw the Beaufighter ditch rushed to their fishing boats to rescue the two Allied airmen. Keen as punch to do their bit in the war, and with a disdain for their German occupiers, the local Greeks took great pride in rescuing Allied airmen, one local remembered the time and said, “we would row as fast as possible and would even get into a fight with the other Greeks rushing to the scene in order to reach the airmen first!”

Within thirty minutes of ditching the two Allied  airmen were saved by Greeks and taken to Ithaki island, where they were provided with both food and shelter.  Arthur Geater’s adventure was not to stop there, whilst the two airmen were moved in a small fishing boat to another hiding place on the island, they were stopped at sea by a German patrol combing the area trying to locate the airmen.

Stan Dellow could not swim and remained on the boat, Arthur Geater could and he dived into the water and swam to freedom.  Stan Dellow survived the war, but was caught and spent the rest of the war as a POW (Prisoner of War) at the Sagan POW camp in Poland.

Arthur Greater got away and managed link up with the Greek resistance in Ithaki he eventually managed to return to Italy and re-joined his Squadron.  He was never shot down again and stacked up a number of successful sorties against enemy rolling stock, shipping and buildings.  He even participated in a daring SAAF raid when a German mine layer ship, the “Kuck–Kuck” was sunk.

Arthur was awarded the Distinguished Flying Cross for his exceptional service. After the war he had a long and successful career in the printing industry and passed away on 3 November 1992. 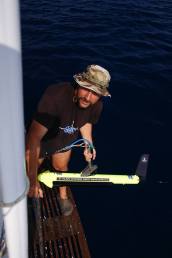 Makis Sotiropoulos with his sonar equipment

Makis Sotiropoulos, an experienced scuba diver living on Ithaki Island, as a boy he had heard the story from the local Greek Island elders about “the aircraft which fell out the sky in 1944″ and he took to the challenge of finding it.  After many years of research and obtaining eyewitness reports he surveyed the area using sonar.

In September 2013 his search came to an end when then distinct shape of an aircraft, sitting at the seabed was mapped by the sonar.  Major Geater’s Bristol Beaufighter was found.  The wreck was dived and confined it was indeed the SAAF Bristol Beaufighter ditched on that fateful hat day.

The exact position of the aircraft wreck is however not shared publicly now, and for good reason as it is within diving limits and modern-day trophy hunters and looters would strip the aircraft clean.  According to Makis Sotiropoulos “this aircraft should remain as it was on the day it was ditched. We have the moral obligation to keep the Beaufighter out of harm’s way, as many relic hunters and looters would make a fortune out of her parts, thus destroying History”.

For prosperity, here are some of the underwater pictures of this most remarkable story and equally remarkable find.

Written an Researched by Peter Dickens.  Thanks to Tinus Le Roux and to Julie Geater for all the information and images.  Extracts from Tinus Le Roux’s dedication website SAAF WW2 Pilots Arthur Geater and from Found and identified: The Beaufighter KV930 shot down on 12 September 1944 By Pierre Kosmidis.