The article in the Sunday Times, today 17 February 2019 is simply shameful and outrageous, on the Front page and Page 6 it makes for very grim and sad reading for any statutory force military veteran.  It’s utterly unacceptable and the Department of Veterans needs to be held account by the veterans fraternity they serve for their revolutionist history which discredits all military service and sacrifice of South African statutory forces pre 1994, including those of the SS Mendi.

In addition, the wholesale discrediting of the Gunners Association because of ‘colonial’ origins has ramifications for all veteran associations under the Council of Military Veterans (CMVO) in South Africa, including the South African Legion and the Memorable Order of Tin Hats whose origins date back to World War 1.

The South African Legion also remains committed to the SS Mendi Remembrance Parades and Services, having just completed a Mendi Memorial service at Avalon yesterday – without the inclusion of The Department of Veterans.

The South African Legion will continue to remember this tragedy in history which suffered so much dishonour and disrespect for politically expediency in the past and now may even stand to suffer the same dishonour by the current government going forward.

We need to truly evaluate our values as South Africans.  The South Africans lost on the SS Mendi suffered the indignity of South African ‘white’ politicians once, it is simply inconceivable that they may suffer the same indignity again – only this time its been done by the African National Congress and its government organs.

Titled “Veterans snub SS Mendi heroes” and written by Bobby Jordan it makes for infuriating reading – here it is:

“More than 600 mainly black South African soldiers died in a World War 1 shipping accident but the department of military veterans says it will no longer honour them because they were involved in an “imperial” war. 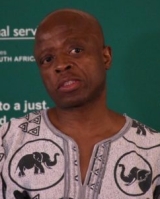 Mbulelo Musi.of the Dept of Veterans

The department has previously supported annual Gunners Association commemoration ceremonies at the SS Mendi memorial in Cape Town. But no more. “We can’t be encouraging an approach that says we still belong to an imperial past,” said department spokesperson Mbulelo Musi.

Kevin Ashton, the chair of the Gunners Association, said the decision — which means there will be no formal military presence at Sunday’s memorial — was an insult to the descendants of the 646 Mendi dead,

The annual ceremony, organised by the Gunners Association, is due to take place on Sunday at the SS Mendi memorial in Cape Town, just three days after President Cyril Ramaphosa visits the same site for a separate Armed Forces Day ceremony.

The Gunners Association event has previously enjoyed support from the department of military veterans and the South African National Defence Force, but it has now been labelled politically incorrect.

Department spokesperson Mbulelo Musi said it had decided to support only “unified” ceremonies that did not involve formations rooted in the imperial and apartheid past, such as the Gunners Association.

“Now in a democratic dispensation, we can’t be encouraging an approach that says we still belong to an imperial past,” he said. “It cannot be, for it defeats the purpose of what our democratic government stands for, which is reconciliation, social cohesion and nation building.” Musi said both world wars were “wars of colonialism” that had little to do with SA’s democratic freedom. “Colonialism was by nature divisive — it is the opposite of what we stand for as South Africans post-’94,” Musi said. “We must therefore be very sensitive to these matters.” Musi said the department would take part in Armed Forces Day on Thursday “in the spirit of trying to say we are all together. It is unfortunate that people move outside the efforts of the nation.”

Kevin Ashton, chairman of the Gunners Association Western Cape branch, said the decision was an unfortunate break from tradition and an insult to the families of the deceased.
A department staffer informed him of the decision in a phone call two weeks ago. “He said the DMV will not support colonial memorials. I said, ‘what are you talking about?’,” Ashton said, adding that the Mendi commemoration was a deeply symbolic event. He said the department also withdrew support for.last year’s Cape Town commemoration of the 1916 Battle of Delville Wood, in which about 2,500 South Africans died in France during World War 1.

A retired senior military officer this week described the department’s decision as “abominable and a disgrace”. He said: “This means no military band or guards in fact no formal military presence at a memorial for South Africans who died on service in war.”
But Musi insisted the department’s intention was not to dishonour victims but to avoid “reopening old wounds”.

There will no doubt be reactions to this Sunday Times article and accompanying it will be a stream of deniability, retraction and ‘misinterpretation’ of a ANC government spokesperson.  However the truth is it happens time and again, be under no disillusion, the ANC is insidiously and consistently eroding South Africa’s military history which is inconsistent with their own political rhetoric.  There is an ongoing campaign to discredit all veterans who served in South African military units prior to 1994 and their long-standing veteran organisations – and it extends to both the war dead and memorials to them.

It’s a foreboding and bleak future for military veterans who fought and died in South African wars prior to 1994 i.e WW1, WW2, Korean War and the Border War.  The inconvenient truth is that their sacrifice is South Africa’s modern liberty. It is a warning of things to come if not challenged now – and the ANC government and Department of Veterans should heed this famous quote by George Santayana;

“Those who do not remember the past are condemned to repeat it”.

SS Mendi: Let us die like brothers … the silent voices of the SS Mendi finally heard