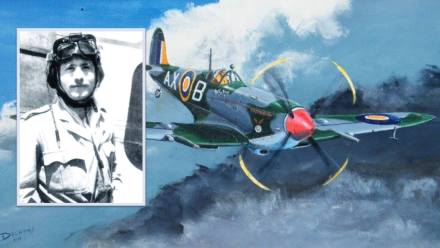 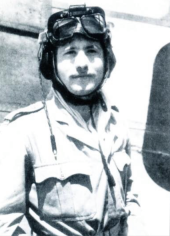 Did you know that during World War 2, South Africa had a one-legged fighter pilot?  This is the extraordinary story of Capt Douglas Smith “Doug”/”Shorty” Rogan DSO, DFC.

Doug Rogan Joined the South African Air Force as a Permanent Force pilot and he served with SAAF 2 Squadron from September 1941 in the North African theatre of operations.  2 Squadron were known as the ‘flying cheetahs’.

He almost immediately started seeing some success when on the 12th October 1941, he damaged a German Bf-109 flying a SAAF Tomahawk Mk.IIb, however in the engagement he took some damage.  He had another success later that month, when on the 22 October he logged his first confirmed kill of a German Bf-109F near Gasr el Arid, during the battle his SAAF Tomahawk Mk11b again took on some heavy damage, however he managed to get home and score his first combat victory.

By the next month on the 06 November he had further success in the Tomahawk and recorded his second confirmed kill, that of an Italian S.79 short down in the Matruh area.    The S.79 had taken some punishment from other SAAF pilots, but Doug finished it off, so was accredited with the kill. 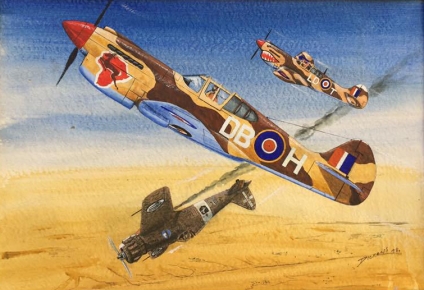 Luck ran out for Doug late in November 1941.  By this time he logged  60 “operation” flying hours,  however during a routine operation on the 24th November he was Wounded In Action (WIA) when his Tomahawk received anti-aircraft ground fire, a  20mm AA shell struck Doug in his right leg.  Severely wounded and losing blood, Doug turned for home and against the odds managed get both himself and his stricken aircraft back to base.  So severe was the wound to Doug’s leg that his leg had to be amputated 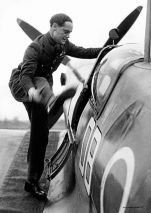 Recovering in South Africa, Doug took inspiration from Group Captain Sir Douglas Bader CBE, DSO (Bar), DFC (Bar).  Douglas Bader was the famous Royal Air Force pilot who was a double leg amputee during the war, he was credited with 22 aerial victories. Bader had joined the RAF in 1928 and in 1931, while performing some aerobatics he crashed and lost both his legs. When war broke he insisted on flying, even as a double amputee. His determination saw him become a Battle of Britain icon using a “Big Wing” of fighters to attack enemy formations over England. He also became a Prisoner of War after he was shot down over France later in the war, and despite his disability he frustrated his German captors by embarking on a number of escape attempts.

With this proof positive account that pilots who had suffered leg amputations could still perform in combat, Doug focussed on getting back to flying, and back to combat flying.  Col. Laurie Wilmot promised Capt. Doug Rogan that if he could be passed the “fit for flying” test with only one leg, he would see to it that Rogan got a posting “up North” again (i.e. back to the theatre of Operations in North Africa and Italy).

Fitted with an artificial leg Doug resumed flying fighters with 6 Sqdn on home defence in the following year. After a check ride he passed his fit for flying test and was returned “up north” as promised.  Back in combat flying he was posted to SAAF 1 Squadron in November 1942, known as the ‘Billy Boys’.

His return to operations was marred by a couple of errors up front, one occasion he took off with a mechanic still hanging on to his tailplane but managed to land without damage to either the mechanic or his Spitfire. Also, once landing in a dust storm his Spitfire hit that of another pilot’s already on the ground. He however began scoring again later that same month on 13th December 1942, he damaged a Bf-109G whilst flying a SAAF Spitfire Mk.V.   By 1943 his victories started to stack up flying in the famous Spitfire Mk. V,  12th Jan he shot down a Bf-109G (probable), 21st Jan he shot down a MC.202 (probable) in the Castel Benito-Tarhuna area.  By 27th March he attained a confirmed kill of a German Me 210 near Gabes. On the 08 May he is recorded as damaging an Italian Re.2001.

He was “Returned To Union” (RTU – meaning returned to the Union of South Africa) after his successful tour on Spitfires in August 1943, by this time he was with SAAF 1 Squadron in Sicily. In all is final score from the war: 3 Kills, 2 Probable, 3 Damaged.

On the 19th of March 1943, Doug was awarded a Distinguished Flying Cross (DFC) for his actions and bravery.   In later life he became an air fighting instructor at 11 O.T.U. When he retired from the Air Force he took up residency in the beautiful little coastal town of Knysna.

Another unassuming South Africa hero not known to many now, a true role model and inspiration to any South African, those who have disabilities and even those who do not.