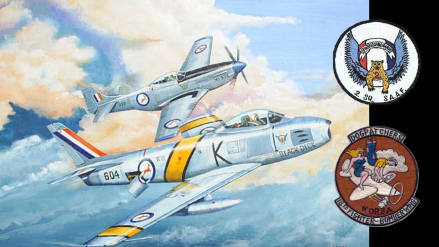 Memories are at best times short and for most South Africans knowledge of the part played by pilots of No. 2 Squadron SAAF in the Korean conflict which started many years ago, are at best sketchy.

But the bottom line is these magnificent, unsung heroes in their flying machines carved a distinguished record in the history of the country’s armed forces.

In the closing stages of WWII and once the Soviet Union had agreed to declare war on Japan early in 1945, it was decided that the Soviets could occupy North Korea and the Americans the South. The dividing line ws the 38th parallel.

In 1947, the UN resolved to create an independent Korea. This resolution led to the planting of the seeds of discontent which would lead to the Korean conflict starting on June 25, 1950, and ending on July 27, 1953. Thus Korea became the first theatre of combat between the Western and Communist worlds, and signalled a major upsurge of the “Cold War.”

In response to a UN resolution, both US and Russian forces were withdrawn from Korea in 1949. With the advent of the Cold War, Korea suddenly assumed vital strategic importance, positioned as it was bordering on the Soviet Union, China and Japan.

Korea became the flashpoint of the Cold War when North Korea, with the backing of China and the Soviets, invaded the South. Within four days, the North Korean army had overrun the southern capital of Seoul and was moving rapidly southward. US troops were committed to the Puscan perimeter, where they were joined by reinforcements from the US, Britian and the Commonwealth in July and August.

After bitter fighting, the thrust south was halted and the final offensive of North Korea was repulsed in September, after which the UN forces started their offensive which pushed the Communist forces back over the 38th parallel.

An amphibious landing of UN troops at Inchon leap-frogged the North Koreans and cut off their supply routes, causing a disorderly retreat. By October, the UN forces had passed the 38th parallel and were heading for the Yalu River, the frontier with Red China. The Chinese then entered the war quite unexpectedly and drove the UN forces back over the 38th parallel.

By the end of January, the Chinese had overextended their supply lines and were forced to a halt. They were then once again driven back norht by a massive concentration of UN firepower to the 38th parallel, where fighting settled down to a vicious stalemate.

Armistice talks were launched and continued intermittently for the next two years, while the war of attrition continued unabated. The war in the air resulted in UN air supremacy ove the battlefields bringing it to conclusion, with the armistice signed at Panmunjom on July 27, 1953.

The SAAF goes to war.

The SA Government announced on August 4, 1950, that a fighter squadron had been offered to the UN for deployment in Korea, and three weeks later it was confirmed that the offer had been accepted, and No. 2 Squadron was been chosen for this formidable task.

Just over 200 officers and men were needed to supplement the existing nucleus of the squadron, and when volunteers were called for 332 officers and 1 094 other ranks came forward. On August 27, key posts were allocated to 18 officers plus 32 additional pilots and 157 other ranks. The officers, under Commanding Officer Commandant Van Breda Theron, DSO, DFC, AFC and Deputy Commanding Officer Major Blaauw, DFC, were experienced in their own special fields, and the combat leaders were all pilots who had distinguished themselves during WWII. Flying operations were to be controlled by the 18th USAF fighter-bomber wing.

Before they were placed at the disposal of the UN. They converted to the F-51D Mustang at Johnson Air Force Base, Tokyo, and were attached to the USAF 18th fighter bomber wing at K-9, Pusan and K-24 Pyongyang.

The squadron flew into action to stem the Communist hordes swarming from the North, the head-long advance forcing it to fall back to K-10 near Chinhae, which remained its permanent base for the next two years.

In this war the SAAF received its baptism of fire from Russian MiG jets and moved from a piston-engined air force into the jet age from flying P-51 Mustangs to F-86 Sabres. In operations using the Mustangs, the SAAF carried out 10 373 sorties, and lost 74 of its 95 aircraft.

During the three years of conflict, The SAAF fielded 243 officers, 545 ground personnel and 38 army officers and men. The ‘Flying Cheetahs’ lost 34 pilots in action, almost a hundred percent attrition rate, which attested to the viciousness of the fighting.

The squadron mainly carried out interdiction and close air support missions, sealing off supplies from the Communist troops and disrupting communications. These tasks were invariably performed in the face of heavy anti-aircraft fire and counter attacks by MiG 15s.

Early 1953, the ‘Flying Cheetahs’ converted from their F-51 Mustangs to the jet-powered F-86 Sabre operating from K-55 at Osan, south of Seoul. They did conversion training in T-33 Shooting Stars and a week later their first Sabres arrived. Cmdt. Gerneke flew the first operational sortie on February 22. The same day they sighted numerous MiG, but no combat resulted.

By March 12, they were fully operational and flew four counter-air patrolsalong the Yalu River in an attempt to lure MiGs across the border to engage in combat. It was during one of these air alerts when, on March 18, Col. ‘Kalfie’ Martin and Eddie Pinaar intercepted two MiGs. Both pilots attacked and one MiG was seen to explode when it entered some cloud. The kill was credited to Col. Martin.

During the last months of the war, missions were equally distributed between interdiction, close support and counter-air, with an occasional rescue patrol.

The Sabres were returned to the USAF and the last SAAF officers left Korea on October 29, 1953, thus ending South Africa’s involvement in the Korean conflict.

By the time the armistice was signed, July 27,1953, the squadron had flown 11 843 sorties carrying out fighter sweeps along the Yalu and Chong Chong Rivers, and concentrating mainly on ground attack operations against enemy airfields.

The USA presented No. 2 Squadron with a Presidential Unit Citation, awarded for extra ordinary heroism in action against the armed enemy of the UN.

Korea presented the SAAF with the order of Military Merit Taeguk with Gold Star, to the unknown dead of the armed forces of the Union of South Africa, as well as a Presidential Unit Citation for exceptional meritorious service and heroism.

By the time the ‘Flying Cheetahs’ left Korea, they had established a record which compared favourably with the best of the UN Forces. They lost 34 pilots in flying nearly 3,5% of all fighter bomber sorties, destroying rolling stock, railway lines, tunnels, bridges and locomotives, military equipment, trucks, artillery pieces, and tanks, and accounting for hundreds of enemy troops.

The 826 South Africans who served in Korea all contributed to a combat record unequalled by a force of similar size in previous conflicts.

This history on 2 Squadron, SAAF in Korea was written by father, who grew up in the 1950’s watching these magnificent Spitfires, Mustangs and Sabre Jets coming in and out of Pretoria, it formed the basis for his love of military aircraft and his lifelong passion as a fine artist painting them. It is with great honour and privilege that I can post images of his Korean War paintings and his written account of the history.

Note, over the years and changes and amalgamations, the 18th USAF Fighter-Bomber Wing is now the 18th Wing – a Composite Wing – at Kadena Air Force base in Japan, it is no longer believed that their band plays the opening bars of ‘Die Stem’ before the American National Anthem. I’m happy to be proved otherwise as its a great pity.

This was a presentation to the President of South Korea on the 60th Annivesary of the Korean war by the South African Veterans Association of the Koeran War at the celebratory banquet in Johannesburg. The painting by Derrick Dickens (and used on this story’s masthead) is being presented by Piet Visser Chairman of the Veterans Association, who flew Sabres in Korea, the painting depicts the two types of aircraft flown by the SAAF “Flying Cheetahs” in Korea. Sabre and Mustang.