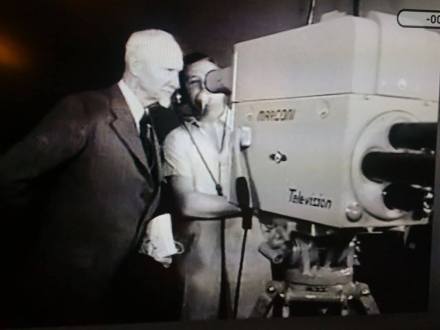 Ever the scientific mind, Jan Smuts inspects a television camera just after World War 2 (cira 1948/9). Knowing Smuts’ he would have fully embraced this new medium given his nature and inquisitive mind, his opposition the National Party saw television very differently – they called it the ‘devils box’ and feared it would unleash corruption of the mind.

Their staunch National Christian principles demanded that television not be brought to South Africa and they resisted the introduction of television until 1976 – nearly 30 years after most the world embraced the technology. Rhodesia introduced TV in 1960 and Rhodesians though South Africa an oddity with no gambling and no TV.

Dr. Albert Hertzog, Minister for Posts and Telegraphs at the time, said that TV would come to South Africa “over [his] dead body,” denouncing it as “only a miniature bioscope which is being carried into the house and over which parents have no control.”

He also argued that “South Africa would have to import films showing race mixing; and advertising would make Africans dissatisfied with their lot.” The new medium was then regarded as the “devil’s own box, for disseminating communism and immorality”.

The issue of whether to bring television to South Africa was back on the Parliamentary debate when South Africa was about the only country in the advanced world to completely miss Neil Armstrong’s famous worlds and landing on the moon – beamed live on TV to planet earth (except, inter-alia – South Africa) in 1969.  The moon landing and live Apollo missions to the moon into the mid 1970’s had sealed television as the primary media mouthpiece of the foreseeable future – it could simply no longer be ignored.

In 1971, the National Party appointed a “Commission of Inquiry into Matters Relating to Television”, headed by Piet Meyer, chairman of the Afrikaner Broederbond and later of the SABC. itself.  A majority of its members, of whom nine were Broederbond members, recommended that a television service be introduced, provided that “effective control” was exercised “to the advantage of our nation and country”.

Still taken from ‘Television in Action’ the first Test Broadcast in 1975 which used the SADF as a subject.

Instead of fearing the advancement of communication via television, the National Party now embraced the power of television to mould the nation’s mind in favour their prevailing political narrative – if it was very carefully censored and controlled by the state.  Albeit that they were still very wary as is seen here is John Vosters’ opening speech on the first broadcast on the 5th January 1976.

In the English part of his short bilingual address BJ Vorster went on to say.

‘After years of thorough preparations, we have now reached the stage where television becomes a part of our daily lives,’ Vorster explained. ‘… It is still too early to say or even to predict what influence it is going to have on our daily lives. But what is clear, is that we are dealing with a medium that, as it has already been experienced by all other countries, can have a powerful influence, whether for good or for bad.’

Vorster then outlined his vision for South African television:

The approach should still be that we want to use the medium to provide fresh and correct information, and healthy entertainment, and to be part of the education of the nation … Objectivity and balance should still be our keyword. It is a big task, not only to bring the world to South Africa, but also (and perhaps especially) to show South Africa to the world as it is in its rich diversity and everything it has to offer.

The possibility of using television as a government propaganda tool was thus clear from the beginning. When TV was finally introduced is was very limited to a handful of hours at night for many years split equally between English and Afrikaans and heavily censored and controlled with heavy religious and Afrikaner nationalist cultural content.

Broadcasting started and ended with a Christian Bible reading and prayer which was then concluded with the playing of the national anthem before switching to the ever-present ‘test pattern’.

Sunday broadcasts were dominated by a NG Church service streamed onto television and Afrikaans entertainment hours were dominated by ‘Boeremusik’ programming and showcasing ‘boere-orchestras’ and smiliar music shows.  The only news channel was ‘SABC’ News – which was very carefully managed.

In 1976, despite initially denying involvement of the SADF in Angola, world media and soldiers and their families themselves could no longer keep it a secret.  To take the high ground the National Party was very quick to jump on the TV bandwagon to publish a very politically and factually skewed ‘docu-drama’ in 1976 called ‘Brug 14’ to paint the forces of good (SADF) against the forces of evil (Cuban Communism) as an early foray into using the SABC as a propaganda tool.  It proved very successful and set the bench for docu-drama’s and documentaries to come.

By 1978, the British Actors’ Equity ban was extended to television programmes recorded on film.  The ban had first been put on South Africa in the 1960s in protest against Apartheid policies, and stated that Equity members would not perform in South Africa if they were not allowed to play to multi-racial audiences. When the boycott was extended to television, it meant that programmes using a performance by any Equity member could not be broadcast over South African television. This created difficulties in the procurement of shows from overseas, as Britain was an important source of material.

Ever resourceful to keep the ‘business as usual’ sanitised approach, the SABC managed to find their way around the ban by importing programmes from other countries and even by adapting British programmes, for example the animated children’s programme, Rupert the Bear. To get around the ban, the SABC dubbed the programme from English into English, as it originally featured performances by Equity voice artists.

Only by 1982 was television opened up to other languages and cultures, and Black South African audiences could finally enjoy some ‘sanitised’ content aimed at them. ‘Independent’ television from state-owned control – M-Net – was only finally launched in 1986, and only on the proviso that they were not allowed to have a news channel.  It was to be an entertainment channel only, the Nationalists continued to maintain a heavy grip on what South African’s could and could not see by way of how the Apartheid experiment was getting along.

In 1988, M-Net, keen on doing some kind of news actuality programming, found its way around the ‘no news channel’ clause with the launch of Carte Blanche (meaning ‘anything goes’) a once a week ‘Investigative journalism’ program which they billed as ‘entertainment’.  It is still South Africa’s only real source of real unbiased local TV news broadcasting having uncovered many of South Africa’s most famous scandals of human rights abuse, corruption and consumer affairs.

Very often, this website – The Observation Post, comes under criticism whenever it is mentioned that the Nationalist system skewed history or news or went about covering up tracks – one only has to cast your mind back to the heavy state control of media, especially mass media and the ‘blackout’ of anything broadcasted on a national basis which would counteract state policy.

South Africans were fed a careful diet of Nationalist Afrikaner dogma for decades, and as a result either have limited or no knowledge of our own contemporary history or if we do have some idea it is often connected with an equally skewed state ‘National Christian’ education policy and it is very biased and often very incorrect.

To get more in-depth as to this ‘influence’ on the general mindset of South Africans living under Apartheid, this documentary ‘SABC 20 years – the untold story’ is a must watch, it  looks at the start up of television in South Africa in 1976 and the manner in which it was directly controlled by the Nationalist Party Government to propagate Apartheid ideology.

Given the modern power of state-owned broadcasters and the advent of ‘fake-news’ in our current political narrative, with the SABC now firmly in the hands of the African National Congress (ANC), the ANC have proved themselves to be no different to the old ‘Nats’, as this powerful medium is once again wielded in favour of the prevailing political narrative – this time it’s all about ‘Black African nationalism’ and no longer ‘Afrikaner nationalism’.

The ANC have indeed learned from the previous ‘masters’ as to the power of manipulating TV media to mould the mind of the nation and we as a ‘rainbow’ nation of South Africans still await a truly politically uninfluenced free to air news channel, a full quarter of a decade into ‘true’ democracy later.

The ANC have even gone as far as launching their very own ’24 hour news’ channel in the form of ANN7 owned by the Gupta family which so blatantly biased towards ANC doctrine and their own news information it’s shameful.

In this sense Dr. Albert Hertzog was dead right – it is indeed the ‘Devil’s Box’ but as has been proved – it very much depends on whose Devil is in control of it.