Here is a rare and very unique display of South Africa’s very own Nazi Party’s shirts, flags and bunting.  Of interest, is the use of Orange, Blue and White in the Nazi swastika configuration – this was intentionally done to reflect the national colours of the South African flag at the time, the ‘Oranje-blanje-blou’.

South African statute forces had fought a hard war against Italian Fascism and German Nazism, and the same war had been fought on the ‘home-front’ in South Africa itself, as with the USA and the United Kingdom, South Africa also had its own National Socialist (Nazism) parties prior to the war (it had actually been a quite popular doctrine across many “Western” European states prior to the war)

Imagine the sheer frustration felt by the South African war veterans returning after winning ‘The War for Freedom’ (as Smuts had called WW2 at the time).  This war had been fought with a massive cost in South African lives to rid the world of Nazism and Fascism in the “good fight” – only to come home in 1945 and within three short years in 1948 find South African ‘home grown’ pre-war Nazi and Neo Nazi politicians swept into government. The very men and their philosophy they had gone to war against in the first place.

During the war the Smuts’ government took severe action against three pro-Nazi South African movements on the Afrikaner right-wing political fringe – the SANP (the Grey-shirts), The ‘New Order’ and the Ossewabrandwag  and jailed their leaders for the duration of the war.

Many of these movement’s leaders and members were folded into National party after the war to one day become South Africa’s political elite (including a  Ossawabrandwag General – BJ Vorster who became a future Prime Minister and State President of South Africa).  See related observation posts by following this link to the Ossewabrandwag “Mein Kampf shows the way to greatness for South Africa” – The Ossewabrandwag and South Africa’s ‘Neuordnung’ and Oswald Pirow

One such South African politician was Louis Theodor Weichardt (21 May 1894 – 26 October 1985) and this is his relatively unknown story of South Africa’s very own Nazi Party. 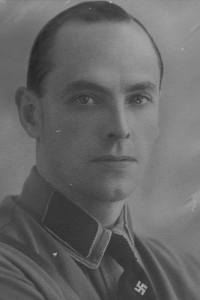 The “SANP” grew to about 2000 members in South Africa, central to their cause in the 1930’s where Jewish immigrants escaping Nazi Germany to South Africa, and their numbers were growing significantly over the decade – in response the SANP and their Greyshirts launched a campaign calling for an end to Jewish migration and even arranged mass protests in Cape Town.  Their primary communication  mouthpiece was a newspaper called “Die Waarheid” (the truth) which was nothing more than a vehicle to spread Nazi doctrine in South Africa 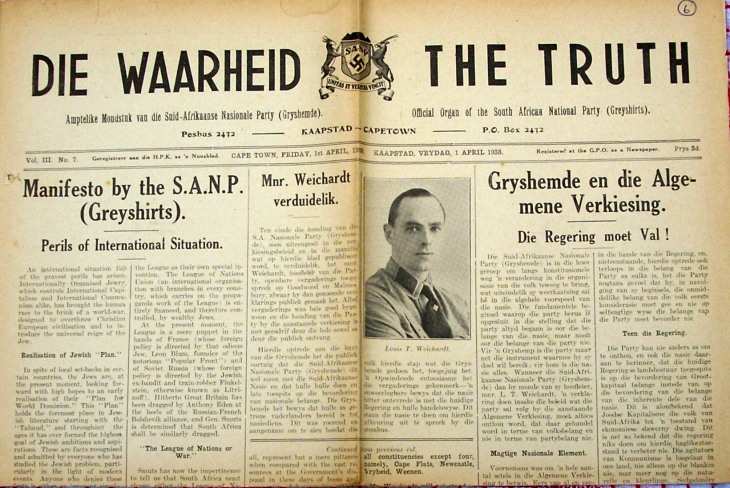 The nature of the movement was clearly seen in March 1934 when the SANP held a rally in Aberdeen in the Eastern Cape, Harry Victor Inch – one of the Greyshirt leaders – announced that he had in his possession a ‘stolen’ document from a Port Elizabeth synagogue – signed by its Rabbi – which outlined a secret plot by the Jews to destroy the Christian religion and civilisation.

The Rabbi in question, Rabbi Abraham Levy, took the SANP Greyshirts to court in Grahamstown and in a landmark case the document was scrutinised legally, it was found to be a complete falsehood and fabricated by the SANP. As a result three Greyshirt leaders were fined and  Harry Victor Inch was found guilty of perjury and was sentenced to serve six years and three months in prison for forging documents defaming the Jewish race and swearing under oath that those documents were genuine. Inch and his fellow defendants, David Hermanus Olivier and Johannes Strauss von Moltke faced other charges which grew out of the Grahamstown trial.

The result has been widely hailed here as a complete vindication of the Jewish people and of Rabbi Abraham Levy who brought the lawsuit against the Grey Shirt leaders.

As the leader of the SANP, Weichardt was arrested and imprisoned during World War II at Koffiefontein detention barracks by the Smuts’ government as an ‘enemy of the state’ – along with all the other far right pro Nazi Germany, anti-British militants and held there for the duration of the war.

Weichardt disbanded his Nazi party in 1948 and closely worked with Oswald Pirow’s ‘New Order’ (another South African neo Nazi anti-communist movement). Moving on, Weichardt then gave his full attention and allegiance to D.F. Malan and the National Party (NP) itself. He had a very successful political career with the NP and went on to become the National Party’s senator from Natal Province from 1956 to 1970.

By the early 1950’s the South African National Party government was littered with men, who, prior to the war where strongly sympathetic to the Nazi cause and had actually declared themselves full-blown National Socialists along Nazi political doctrine lines: Oswald Pirow, B.J. Vorster (a future President of South Africa), Hendrik van den Bergh, Johannes von Moltke and Louis Weichardt to name a few, and there is no doubt that their brand of far right politics, known collectively as Christian Nationalism (a form of Nazism) was influencing the National Party’s government policy. 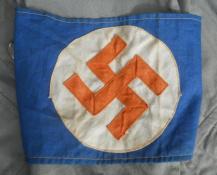 The folding in of the three key National Socialist organisations, including the SANP, into the National Party’s political sphere would have a resounding impact on the future of not only the majority of ‘Black’ South Africans (who were viewed as ‘Inferior’ peoples by these hard liners), but also minority white ethnic groups like South Africa’s very large Jewish community.  The arrogance of this underpinning politics is seen with Louis Weichardt himself, who, on becoming an elected National Party Parliamentarian quickly covered up his dubious history as a full blown card carrying Nazi, and rather infamously declared that he had never been against the ‘Jewish race’ but only against the actions of certain ‘Jewish communists’. Not a single Jew, in his ‘opinion’ had suffered through his actions.

Researched and written by Peter Dickens.  References Wikipedia, “Not for ourselves” – a history of the SA Legion by Arthur Blake, “Echoes of David Irving – The Greyshirt Trial of 1934” by David M. Scher. The Rise of the South African Reich by Brian Bunting. Our thanks and acknowledgements to Ulrich Duebe, the current owner of the collection as illustrated.