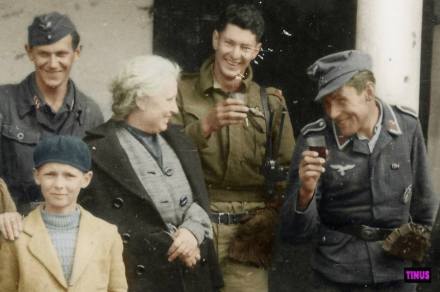 This colorised image captures a must read story about a South African Air Force pilot who escaped from becoming a Prisoner of War (POW) by capturing his own German captors during WW2.  The image shows South African Air Force (SAAF) Fighter pilot Lt. Peter During (SAAF 7 squadron) with German prisoners in Italy April 1945, and this is the story of how he came capture them.

Lt. Peter During was shot down behind enemy lines in Italy right at the close of the war,  he survived a crash landing and was promptly taken prisoner by the Germans.  Whilst been escorted to a German Lufwaffe Prisoner of War (POW) camp (he was a pilot and thus his interrogation and imprisonment was the responsibility of the German airforce), he opened a conversation with his captors.

He was quickly able to establish that they could already see the writing on the wall, that the war was at an end and Germany would loose it.  The Germans agreed with him that the best way for them to survive the war was to make it over to the Allied lines and surrender.  He then convinced his four German escorts that he was their ticket to survival and to become his prisoners.  They agreed and then changed direction and headed for the Allied lines instead.

It was a simple agreement really – if challenged by any German or other Axis Forces along the way the German’s agreed to say they were transferring an Allied pilot and continue on their way, and if challenged by Allied troops or the Italian Resistance fighters, Lt. Peter During would be given their MP-40 machine pistol and state he was transferring German prisoners.

On their way they stopped at several Italian houses for food and wine. One of the Germans had a camera and hence the photograph. In the feature picture you can see Peter has the MP-40 machine pistol while they enjoy a glass of wine with a rural Italian family hosting this odd group of men, whilst in other pictures the MP-40 has changed hands. Proof positive that there is some humanity in the craziness of war.

They made it over to the Allied lines, Peter During wrote them a note as to their good conduct which he gave to them as they went into captivity.  The camera was given to Peter for safekeeping as its owner knew it would fall into the wrong hands and be lost once going into captivity.

Despite trying on numerous occasions to track down these men Peter had “saved” after the war ended, he was unable to find them, thank them and reunite the camera with its original owner.  He printed the role of film to discover this priceless snippet of history.

If you want to hear this remarkable story from Peter himself, take the time to watch this video interview he did with Tinus Le Roux, it’s an absolute gem of South African military history.