Propaganda was a means of Psychological Warfare was employed by all sides in the SWA/Angolan ‘Bush War’ Conflict – blunt and strait-forward in communication and tone so the message was clear.

Usually symbols of death (or images of death) accompanied this type of printed propaganda and they served to underpin the threat and drive fear – this is an example of a SADF leaflet distributed to warn the local population in South West Africa/Namibia and neighbouring states not to join SWAPO (the South West African People’s Organisation) against whose armed wing – PLAN the SADF and SWATF forces were in combat with.

The message is crude and strait forward, the image used is easily assimilated and understood, it’s a “brutal” communication designed to get the point across to the lowest common denominator, no need for frills, pretty fonts and logos.

Propaganda is a “weapon”

Please note, this is of historic importance as to the propaganda used in the Bush War. It is not intended to glorify either the SADF or SWAPO – the intention is to capture and keep alive a little of South Africa’s military history so often forgotten.

Propaganda by its very nature preys on emotions – its intension and its goal is an emotive response – in military terms it’s classified as a weapon, as that response can influence the fight, either by spurring it on motivating the combatants or by stopping it and demotivating the combatants.  In many ways Propaganda can influence the outcome of a battle or war as much, if not more that the actual use of bullets.  Believe it or not – all this power – and it can simply be boiled down to a crude message like the one shown here.

When reviewing propaganda from a historical perspective (or even military perspective) it must be dealt with objectively without emotion. If it triggers an emotional response then it has simply done it job and wins, that’s how this particular weapon works…

This great photograph of Cpl Stephen Bothma captures the grit and camaraderie of a 101 Battalion ‘Romeo Mike’ unit in action somewhere on the Angolan/South West Africa (Namibia) border. The ‘Romeo Mikes’ meant Reaksie Mag (Reaction Force) and these units where designed as long range special forces of the South West African Territorial Force (SWATF) and their purpose was to relentlessly track and then surround insurgents.

By 1981 101 Battalion had been established as a light infantry battalion.  By 1983 at least 2700 men had been recruited and trained, many converted SWAPO insurgents. 101 Battalion translated Police tracking concepts to suit Army operations. These formed two Reaction Force companies: 901 and 903 Special Service Companies. These Companies concentrated on external operations and pursuit of infiltrators. By 1985 101 Battalion fought under its own command instead of being detached to external units. 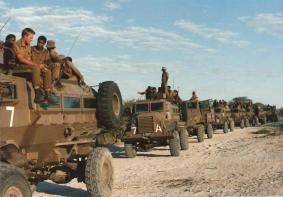 The Romeo Mike and 101 engagements were intense to say the least.  This Battalion saw an extraordinary amount of combat and it can be put down to the Romeo Mike strategy and tactics to deal with insurgency (long range patrolling).  To give an idea of the intensity of combat 101 Battalions reaction force teams (Romeo Mikes) averaged about 200 “contacts” annually, a “contact” was usually refereed to an armed military skirmish between SWAPO PLAN insurgents and conventional forces.   It can be argued that the vast bulk of the fighting against insurgents on the South West African (Namibian)/Angolan Border was left to the SWATF formations (units including 101 Battalion), Police formations like Koevoet, 32 Battalion and search and destroy missions by SADF Recce (Reconnaissance) and Parabat (Parachute) formations. 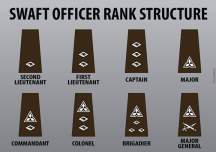 This is because South West Africa was after all seen as a “separate” country to South Africa with its own defence force, therefore it had its own insignia.  However, in realty the equipment, clothing, weapons and even many of the officers and non commissioned officers were supplied by South Africa.

One thing that was clearly very different with all of the South West African formations, and especially 101 Battalion, was the very high degree of racial integration, the ethnic make-up of these Battalions was very reflective of the South West African (SWA) demographic. Division along the lines of race in the military structures did not really exist to the same degree that it did in the South African Defence Force.

Certainly on this level – fighting together as a 101 Romeo Mike unit, any sort of racial differentiation did not exist at all.  There was an old saying on the Border – there is “no Apartheid in a fox hole.”   Veterans in both the SADF and the SWATF will always attest that they do not care for colour as it matters not a jot in a firefight, and regardless of anything else, men in this situation (the hard trials of combat or serving in a combat area) will always bond as brothers.

Famous characters of the Border War – Major Helmuth Adolf (Tikli) Kessler, who flew a PA28 Cherokee which he converted to have fire power and bombing capability in support of operations.

Major Kessler had a ” tube” which he used to drop grenades from between the seats and the two RPK’s (each with two 40 round RPK magazines welded together) under the wings.

He experienced an engine failure (attributed to a bent valve) whilst in support of ground operations and called in a forced landing. On landing the plane up-ended and the grenades in the tube fell out and exploded.

Major Kessler was regarded as a bush war a legend with a larger than life personality and he is sorely missed by all who knew him. 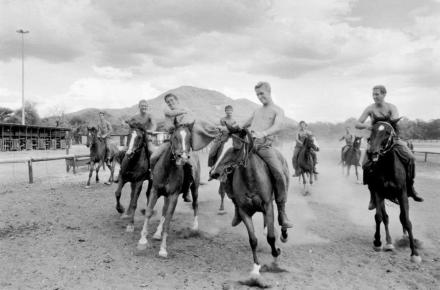